12 Secrets To A Happy Long-Term Relationship 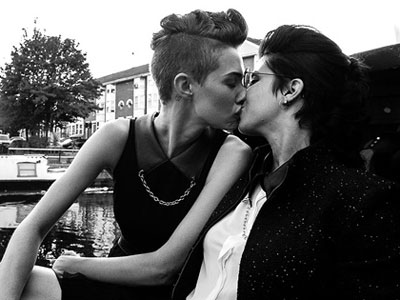 What exactly makes a successful long-term relationship? Some people think it’s all about having similar visions, or similar hobbies, or just being similar. The truth is, if we date someone who’s exactly like us, chances are… We’re going to hate them at some point in time. Having too much in common actually makes you incompatible, because our brains strive for someone who helps offset our own weaknesses.

Obviously, someone who’s your polar opposite isn’t going to stick around too long either – after all, you don’t want to date someone who you have nothing in common with, right? It’s a delicate balance, and not every relationship is going to do the trick – and that’s perfectly okay.

1. Not every relationship is meant to last forever – know when to let go.

It might seem a little counter-intuitive for me to start off this list, this way, but let’s get really, painfully real for a second: Not every relationship is meant to stand the test of time. Does that mean your three-week romance is a waste of time? Absolutely not! As long as you’re learning something about yourself (and hopefully having a good time while you’re at it), the relationship served its purpose. You need to be able to recognize an inevitable end, because they do exist. Now that we’ve got that out of the way…

2. The grass is always greener where you water it.

When we get wrapped up in the day-to-day happenings, it’s easy to start neglecting our relationships. It’s not right, but it happens more than we’d like to admit to ourselves. If you find you have a wandering eye, it doesn’t necessarily mean that you need to stray – it actually means that you need to try a little harder in your current relationship. Most likely. In some cases, it means you’ve been trying too hard and your partner just isn’t putting in her fair share… In which case, please see #1.

3. You’re not always going to agree… And that’s perfectly fine.

I know I’ve read a ton of articles that say that a happy relationship involves choosing your battles. What’s usually lacking, though, is the revelation that picking your battles does not equal don’t acknowledge your disagreements. It’s completely normal to disagree with your partner from time to time – and, in fact, if you never disagree, there’s a pretty good chance that at least one of you is lying. Acknowledge your disagreements, but don’t let the little things ruin your love for each other.

It’s 100% okay to have your own hobbies and interests. In fact, it’s necessary – if you give up the things you enjoy, just because your partner doesn’t enjoy them, you are making your partner way too high of a priority in your life. It’s also totally okay to spend time alone, even if you don’t really have anything going on. I’m not saying you should go so far as to sleep in separate bedrooms in the same house, but every now and then you just want to chill without any company. And it’s perfectly okay to want this.

Independence is important, but so is spending time together. Your partner is on the local softball team, but you couldn’t care less? That shouldn’t matter – you can still go to support her at the big game (or at least some of her games). Hung up on stuff from work? Make sure you’re giving her attention, too – she might even be able to help you out of your work-stress-mode. Remember that you guys are each other’s sidekick and support group – and act like it.

Relationships thrive on a little spontaneity, even when it’s only spontaneous for one of you. Every now and then, you’ve got to surprise your partner. I’m not saying you need to plan an all-out bash (partially because I’d probably have a nervous breakdown if someone threw me a surprise party), but you should try to surprise each other from time to time. Even if it’s something super simple, like washing up the dishes even though it was most definitely her turn.

7. Take your problems seriously, and get help when necessary.

One of the hardest things for me to do is actually ask for help. I get so caught up in all the endless things that I, myself, alone need to do or fix or handle, and I forget that I have someone on my team. I have a bad habit of compartmentalizing things, and excusing those things that wouldn’t really be a big deal if they were on their own. But, in the scope of your relationship, a lot of little problems can be as bad as a few big deal-breakers, so make sure you’re reaching out for the proper support system. Sometimes that means counseling. That’s nothing to be ashamed of, either.

8. Understand where your priorities lie.

Your partner probably isn’t going to be the absolute top of your list, and that’s okay – but she should definitely fall somewhere within the first few. Well, not necessarily your partner specifically, but your relationship as a whole. Make sure you know what your biggest priorities are, and your partner’s, too. Your priorities don’t have to be identical, but they should be similar enough that they don’t clash.

9. Respect your differences and your partner’s choices.

You’re not going to agree with everything your partner thinks, feels, and does. You’re not obligated to agree with any of these things, as we’ve already discussed. But you are obligated to support and respect her. Does that mean you can’t tell her when she’s making poor choices? Of course you should. But make sure that the decisions are objectively bad before you say something – not just based on your personal prerogative.

10. Your words and actions have consequences.

When someone we really care about says or does hurtful things to us, they mean a lot more than when a stranger says them. Example? Once I had a random stranger call me a “fat cunt”, and it didn’t bother me nearly as much as when my partner told me I looked “gross” (after losing the weight that caught the attention of the stranger just a few years before). Your words will have an immeasurable impact on your partner, so it’s best that you avoid saying anything you might regret later. Your words can never be taken back once they’ve been said. Don’t screw it up.

11. You’re going to change, but make sure you stay true to yourself.

It always cracks me up a little when a character in a movie tells their partner, “You’ve changed!” Well… Of course they’ve changed. People don’t stay the same for years at a time, and if they did, they’re not really applying themselves. But it is important that, through all your changes, you do your best to stay the same person your partner fell in love with. Don’t forget your values, don’t get too wrapped up in newness, and try not to lose your sense of humor, either.

12. Never stop falling in love with her.

This is one of the most important things I can pass on to you today: Love isn’t a magical feeling that just stays forever. That feeling, those butterflies, all of that, isn’t love but infatuation. Real love takes a bit of work, and you need to fall in love with her again every single day, or it’s not going to work out. Date nights help, as do little tokens of your affection, but largely, it’s about remembering why you chose to be with her in the first place. Remind yourself how great she is, and take steps to make sure she knows how much you appreciate her.

PrevPreviousBody Positive: Female Olympians Pose Nude To Celebrate Their Bodies That Got Them To Rio.
NextRuby Rose Has Signed On To Yet Another Action MovieNext