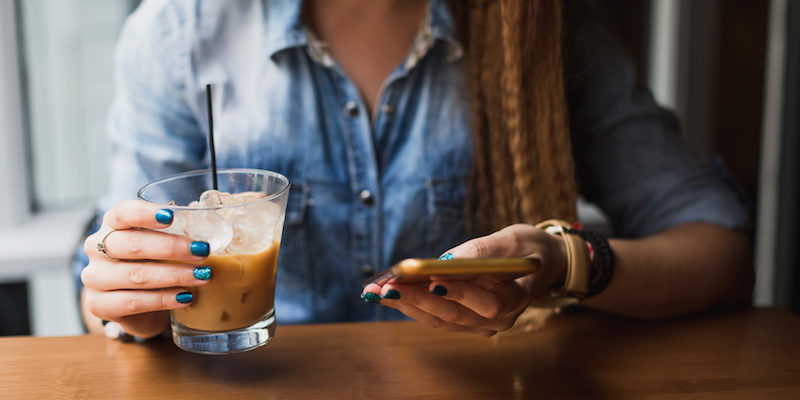 Writers really are a weird bunch. I’m not even just talking about professional writers (although I think we might be the weirdest bunch of all), but there’s something about us that non-writers just don’t really understand. It’s not your fault, either – sometimes, we can’t even understand ourselves, but somehow we manage to understand each other. (How weird is that, anyway?)

Whether your girlfriend is still keeping scrap notes in her nightstand or she’s graduated to publishing articles all over the internet, these 12 things pretty much tell you that she’s a writer at heart – so encourage her to reach for her dreams!

1. She keeps a blog with a super creative title.

I’m sure there’s someone out there who’s going to point out that most blogs aim for a creative title. I’d like to remind those people that blogging is, in fact, writing – and is the first platform that most writers use to showcase their work publicly. Even if her blog posts seem like mindless drivel to her, it’s just a sign that she needs to write.

2. She has a compulsive need to write.

We can’t explain why we feel the need to write everything down, but writers often have compulsions that deal with writing. Personally, I need my journal to get through the day – even if I don’t actually use it, I feel naked if it’s not in my bag. And if it’s not a journal, it’s a notebook, a pad of sticky notes, or even an app on her phone. One way or another, she needs an outlet for her extra words.

I think everyone probably has a love/hate relationship with puns, but if your girlfriend is legit obsessed with puns that only major bibiophiles will get, there’s a good chance that she’s a writer (or maybe just an avid book junkie – although the two tend to cross paths a lot).

4. She definitely judges people based on the books they like.

She’s not going to talk down on you if you haven’t read her favorite, but if your home library consists entirely of a) anything 50 Shades, b) anything by Stephenie Meyer (not to be confused with KitschMix’s own Stephanie Meyer), or c) only the books that Oprah recommends, your relationship is probably heading… nowhere. Fast.

5. She tries to keep a planner, but it really turns into more of a journal.

After all, there’s a saying in the writing world that this job is 10% work and 90% not getting distracted on the internet. Actually planning when inspiration will strike is really hard, and sometimes we get so wrapped up in the things that we need to get out of our brains (like, ASAP) that our actual need-to-do-this-today plans get a little fuzzy, to say the least.

6. “Netflix-and-chill” means something totally different to her.

In fact, if she invites you over for a Netflix date, you can pretty much count on her wanting to rehash the plot holes and anachronisms and random trivia about the actors. Oh, and if you suggest a movie that’s based on a book? Chances are she’s read the book and can give you a 1,500-word essay about why the movie was a terrible adaptation.

In fact, most people won’t carry a notebook with them unless they “think” they’ll need it. Writers are different because we know that everything can be inspiration, and we simply can’t trust ourselves to hold onto each gem until we get back home to our slightly-obsessive notebook collections. Might as well keep one in the car, one on the nightstand, one in the kitchen, one in the bathroom… You know… Just in case.

8. When inspiration or curiosity strike her, they require immediate action.

That’s why she has so many notebooks. It has nothing to do with how awesome they are – she’s got to keep a log of everything she thinks she’ll want to Google. Or everything she did Google. Or that amazing idea she saw on Pinterest. It doesn’t really matter what it is – if she can’t handle it right that minute, it needs to be written down so she can research it later.

9. That “research” is carefully organized for future reference.

Okay, so she might not ever need to reference where the first Ferris wheel debuted (ahem… Chicago), or why men have nipples (because everyone starts out biologically female), or the 101 different uses for apple cider vinegar… But she knows that there is some chance that it’ll come in handy, so she makes a note somewhere. You know. Just in case.

10. She thinks indie bookstores and coffee shops are the most romantic places on the planet.

She might even long for her storybook romance that starts with two people reaching toward the same eclectic first-edition… Even if she’s madly in love with you. But you’ll let her have her fantasy, right?

11. She has ever taken a non-required (or not-for-credit) English class.

Let’s face it… The English language is something that you pretty much either love or hate. Writers, on the other hand, live somewhere in between. It’s been said that writing is harder for writers than for non-writers, because we’re so precious about it. So, if your girlfriend has ever taken a writing or English class “just for fun”, it’s secretly because she’s a perfectionist who wants to improve her craft.

12. Lastly, she fully appreciates the magic of simplicity and the underlying beauty of the mundane.

More than anything else, writers have a passionate relationship with words. (Please note that passionate doesn’t always mean loving – it truly is a conundrum in itself. We painstakingly obsess over using the “wrong words”, yet we take in the magic that comes from the mouths of children and yearn to have imaginations like theirs.

I’m pretty sure there isn’t a single other hobby or career that has full-grown adults envying the talents of toddlers, but creativity definitely gets harder as we get older.

In turn, we learn the absolute beauty of the things that are around us. Where non-writers might see a gorgeous star-filled night sky, a writer sees a blanket full of diamond, sapphire, and topaz. Where a non-writer sees a field of tall grass, we see a green and gold river that changes directions with the wind. Her poetic views of the world can reassure you that there really is something to smile about, even in the worst of situations. When everything is going wrong, your writer girlfriend reminds you that it’s not a failure – it’s a plot twist that’s forming your character arc. Remember that, and don’t forget to thank the writer in your life!