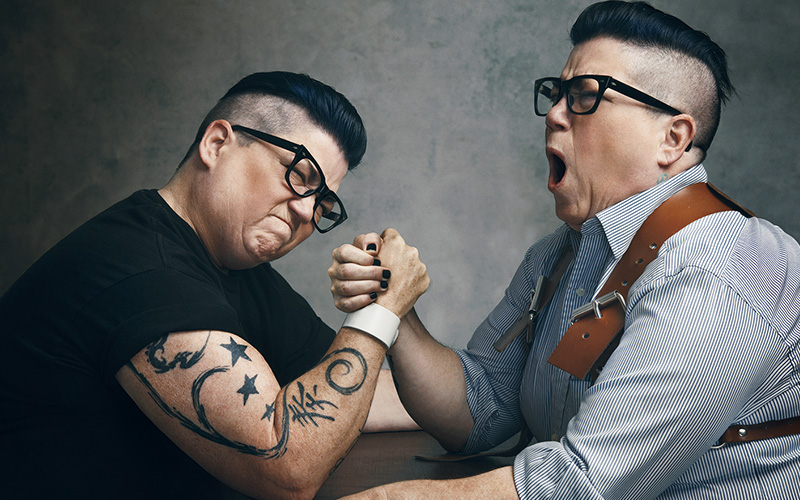 From Miley Cyrus to Ruby Rose, stars are shedding a light on a different kind of gender identity.

These women refuse to adhere to dated, oppressive standards set on gender and beauty. They are changing the game and using their fame to help level the playing field for the women of tomorrow.

The 29-year-old stars as inmate Stella Carlin on season 3 of the show and thanks to her performance, her gorgeous androgynous looks and her openness about her gender fluidity, the model-now-actress is making waves when it comes gender perceptions in the media.

Despite Lena Dunham being an enormously successful writer, actress, and producer, she has been the subject of harsh criticism regarding her appearance. In an interview with Gothamist , Lena explained her body ‘Zen’ philosophy:

We’re one weight one day, we’re one weight another day, and some day our body just doesn’t even exist at all! It’s just a vessel I’ve been given to move through this life. I think about my body as a tool to do the stuff I need to do, but not the be all and end all of my existence.”

Samira Wiley breakout role came playing Poussey Washington in the Netflix original series Orange Is the New Black. Wiley’s androgynous beauty is ever present in the show. However, even though her character is always dressed in khaki slacks and a baggy sweatshirt, she does like to mix things up in real life.

Over the past few years since my own public image has increased tenfold, I have been overwhelmed to witness the profound ways that I am able to make a difference simply by living my life openly, and with love.”

Actress, comedienne, jazz musician, Lea Delaria has gained media traction with her recurring character on Orange is the New Black. However, before then she was the first openly gay comic to break the late-night talk-show barrier with her appearance on The Arsenio Hall Show in 1993.

DeLaria has performed stand-up comedy for more than 25 years and is a prominent figure in the world of LGBT comedy. She began her career billing herself as “That [expletive] Dyke,” explaining that when she walked down the street, people would yell that at her.

I think the most basic prerequisite of being a woman is that you must WANT me. if you don’t want me, then your not a woman.”

Christie knew that having traditional aspects of feminity (long hair, heels, make-up) stripped away would be important for her work and in terms of her own development. “I would be confronting elements of myself that I didn’t want to confront.”

Ellen Degeneres’s career was all but lost when she came out of the closet in 1997. Now she has a successful daytime talk show and has reclaimed not only her career, but has blazed a new path for people of the LGBT community who seek careers in the entertainment industry. She is an advocate for being true to oneself, and shows how beautiful honesty can be.

Actress and comedian Rebel Wilson knows the pressure on women in Hollywood to have skinny bodies, but she doesn’t let that get to her. Instead, she focuses on what her body can do, and how to take care of it.

Kristen Stewart has made it clear time and time again that she has never been much of a girly girl. So stepping out make-up free is the norm, and just look at how well she wears androgyny, hair short and tousled, a bare face, and rolled up sleeves.

The strangest part about being famous is you don’t get to give first impressions anymore. Everyone already has an impression of you before you meet them.”

At the Human Right’s Campaign inaugural Time To Thrive conference, Ellen Page memorably came out as a lesbian in a speech that grabbed headlines across the country. After calling E! News out for calling her gym style that of a “massive man,” Ellen articulated the suffocating burden of sexism and stereotypes in the mainstream media flawlessly.

There are pervasive stereotypes about masculinity and femininity that define how we’re all supposed to act, dress, and speak, and they serve no one. Anyone who defies these so called norms becomes worthy of comment and scrutiny, and the LGBT community knows this all too well.”

Writer, actress, producer, and all-around-amazing entertainer Mindy Kaling set the record straight about how some people in the media address her appearance. She’s not white or rail thin, yet she’s comfortable in her own skin, and is proud of the way she looks, regardless of how it compares to mainstream standards. Now THAT is real beauty.

Comic powerhouse Melissa McCarthy has been the subject of harsh criticism regarding her weight, but she rarely acknowledges any of it. By opting out of a discussion about her weight, she’s creating a better world for her daughters as she explains on Anderson Cooper.

I want them to be confident, strong, healthy, happy women. And I want them to define themselves by their actions…and by how they treat other people…and I know everyone else is going to get all caught up in it, but my job is to always bring it back to what do you do, and how do you live, and what do you say to other people.”

Laverne Cox, an actress on the Netflix series Orange Is The New Black, is the first transgender woman of colour to play such a role on a scripted television show. She’s also an activist for the transgender community. During her interview with Katie Couric, she was asked about her genitalia. Instead of getting mad about such an invasive question, she answered with authority and grace about what is truly happening when she’s asked such things:

The preoccupation with transition and with surgery objectifies trans people and then we don’t get to really deal with the real lived experiences. The reality of trans people’s lives is that so often we’re targets of violence and discrimination disproportionately to the rest of the community.”

With the help of famous photographer Terry Richardson, Miley Cyrus set fire to the cute and innocent image of Hannah Montana back in 2013 with the iconic topless photo shoot. Since then, Cyrus has continued to test the limits. In recent months, the Grammy nominee has been vocal with her support for LGBT homeless youth and showed her disgust for the rich and powerful.