14 Lesbian Books I Wish I Could Read 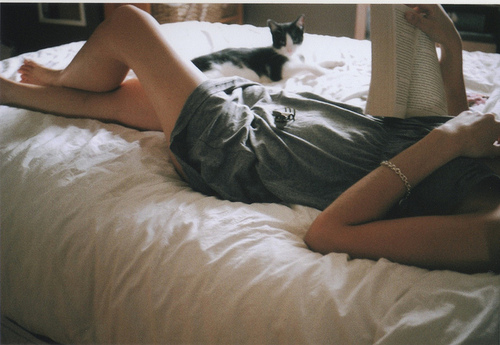 This might come as a shock to some of you, but… I am a sucker for romance.

OK, maybe that’s not as big of a shock as I tried to give myself credit for. But I like the idea of a love story that I can get into – especially if it happens to have a good main plot (I don’t like romance to be the focus of everything), and great lesbian characters.

The problem is, those three things are hard to find all in the same book.

Most “lesbian romance books” are all about steamy sex and homophobic jerks – which I suppose is realistic enough, but I want to read something that hits me straight to my soul.

That’s actually a lot of the reason I became a writer. I noticed that there were a lot of areas in lesbian literature that were seriously lacking, and it became a goal for me to fix those little holes.

I’ve sort of strayed from that path a little bit and delved into a world of advice letters and product descriptions, but I jotted down my newest ideas just last night. (Now, if only I had the time to work on that sort of stuff.)

Thankfully, though, the web in the lesbian literature world is starting to get a little thicker – and I’m finding that there actually were books that were everything I’d hoped for. I just had to look a little harder to find them.

Christabel speaks of a love that spans different times – thanks to an evil force that seeks to keep the lovers apart.

This story is told in an elegant way, which is an absolute delight for those of us who want to see the beauty in the written word just as much as the world around us.

The excerpts that I’ve read from this book are completely entrancing, and I am really tempted to go spend money that I don’t have at the moment to make sure I get this book as soon as possible. I guess I’ll just settle for more excerpts for now, but this has definitely made my birthday list.

Some of you might be familiar with the author on this one – she’s the same writer who did Tipping the Velvet (the book that the miniseries was based on).

She’s done it again with Fingersmith – a dynamic, intricate love story dealing with the romance felt between thieves. Apparently this one got a miniseries too, but BBC didn’t do such a great job on this one. Still, I’ll definitely have to check out this book on payday.

Okay, so… I’m a sucker for pirates. Really, I am. I’m not sure if it’s because of Johnny Depp or my high school mascot, or something else entirely, but I am definitely a pirate fan – so when I heard that Shell Game was about a beautiful pirate queen and her prisoner… Well, I was already hooked.

Benny Lawrence is known for her witty writing style, and this book is widely regarded as one of her best. Yes, please!

The Magistrate / The Procuress by Keira Michelle Telford

This one is technically two books, but they’re part of a series and they really should be together. The Magistrate and The Procuress tell the tale of a post-apocalyptic future in London, with the future-space-steampunk equivalent of a cop and a hooker. (The books call them a magistrate and a procuress, respectively.)

Oh – and did I mention, in this post-apocalyptic warzone, homosexuality is punishable by death? Definitely an interesting twist – one that is actually fact in some areas of the world right now. Maybe there’s a little activism written into this book too!

This particular story sounds like it veers a little heavy into mostly romance territory – I mean, the cover has a picture of a sparkling peninsula… Could be pretty cheesy. Thankfully, that doesn’t seem to be the case, as Tomorrow’s Promise centers around a somewhat dysfunctional pairing.

These women come from different backgrounds and different situations, and they both keep screwing things up. This is a back-and-forth, will-they-or-won’t-they tale that just happens to take place on an island. Worth looking into if you’re a fan of romantic drama.

Sword of the Guardian / Prayer of the Handmaiden by Merry Shannon

Ah, another two-for-one deal here, although these books are easily stand-alone works, too. Sword of the Guardian and Prayer of the Handmaiden are both set in the same world, with some of the same characters, but Sword of the Guardian focuses on the princess and her security guard, whereas Prayer of the Handmaiden deals with two of the characters who were in the background of the first book.

I love that you can read either or both and still feel like you’ve got a complete story going on, so I will definitely be taking a look at both of these books.

Keepers of the Cave / Weeping Walls by Gerri Hill

Another package deal, yay! In this particular instance, the books can stand alone, as they’re about the same characters, but the stories themselves are completely separate. (Although, if you are going to read both, you should probably read Keepers of the Cave first.)

In these books, the main characters are FBI agents who investigate paranormal cases. Sounds too perfect! Keepers of the Cave deals with a cave monster and a kidnapping, while Weeping Walls is (you guessed it) about a haunted house. Now, being the big horror/suspense fan that I have, allow me to just go buy some books I can’t afford real quick…

The excitement and suspense of an ex-DEA-agent-turned-drug-kingpin? Oh, yes, that sounds right up my alley. Lucifer Rising is one such tale, and there’s even more controversy and intrigue than that. This story follows the aforementioned woman after she’s taken over the drug cartel she was chasing down.

Then she meets this incredible woman in a nightclub and starts a complex new relationship – but what happens when she finds out this woman is secretly a reporter? This sounds like a must-read for anyone who likes crime dramas with (sexy) dirty cops. Sadly, this one isn’t available on Kindle, so I’ll have to wait until payday to check it out!

Okay, Reflected Passion sounds pretty intriguing to me: A woman buys an old mirror with the intention of refurbishing it. Instead, she’s drawn to it and displays it on her wall – but one night, the mirror wakes her up with noises of passion.

Turns out this mirror is a window into another era, one where women had to be accompanied by a man to be “safe”. Present tense and past tense mirror each other as the women can each see into each other’s world through the small pane of glass.

That Certain Something by Clare Ashton

This one’s a more modern-day love story, telling the story of Pia and Cate. Honestly, the description sounds a little bit like Carol to me: A young photographer who has just landed a job at a magazine (that would be Pia) comes across an attractive wealthy woman (that would be Cate) and the two hit it off.

Actually, the description I found doesn’t mention any age difference, but it does tell how Cate’s grandfather is a raging homophobe and gun-worshipper. Yet, somehow, this is a comedy – one I’d like to learn a little more about.

Personal story time! When I was 15, I moved somewhere I had pretty much never been before and the first landmark I found was the public library. The very first book I checked out was Hard Love by Ellen Wittlinger, and it was an instant favorite – I think I read through it four times in the week I had it. (I’ve since bought multiple copies, but friends keep borrowing them and then never giving them back… Grr!)

Love & Lies tells what happens next for the secondary main character from the first book, gifted-and-talented Marisol Guzman (who coincidentally was my first-ever book crush). Since the first one was my favorite book, and the second book follows my favorite character from my first book – who is a lesbian writer, how great is that – I’ve decided that I can actually afford to buy this one now.

Guess what I’ll be doing tonight!

If there are any other great lesbian books you’ve read, I’d love to take a look at them. Drop them in the comments!

3 thoughts on “14 Lesbian Books I Wish I Could Read”

PrevPreviousAnother TV Show, Another Lesbian Character Death
NextEllen Page On Coming Out: “I wish I’d made the decision sooner.”Next