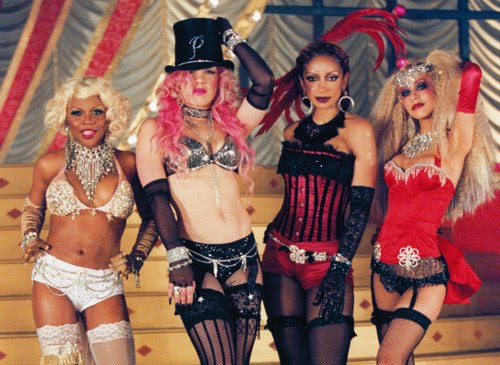 I’m not sure about you, but… I knew I was into girls way before I was ready to admit it to anyone else. There were so many signs that I saw in myself and I wrote off as one thing or another. Whether you knew and didn’t come out, or you didn’t know until everyone knew, this list is sure to bring back some vivid memories – or maybe even inspire some type of feelings within you.

How many of these songs just screamed, “Yep, definitely gay!”?

For the most part, I’ve never been too much of a Britney fan, but this song is a stark exception. It’s got a similar sort of video-vibe that Dirrty had, but it’s a little less overt about it. Plus, who can honestly say that they’ve never had a thing for bellydancers?

The subtle connections to lesbian aesthetics are suddenly much less subtle. We’ve all dated someone who dressed like one of the Ciaras in this video – whether it’s the ballgown Ciara or the snapback-and-wifebeater Ciara. Admit it – and then admit you want to watch it again! (And please try to get past the part where she assigns unnecessary gender to things. It’s 2016, and we’ve moved past it, but this video came out in 2007, so we’ll forgive her.)

The Veronicas – Take Me On the Floor

I think one of the first signs that I couldn’t hide the gay anymore was when “4ever” came out, and I immediately assumed that the two were lovers, instead of twins. (I know, I know, it’s creepy, but they didn’t have their hair the same back then, and I was apparently blind.) But this song even implicitly gives the idea that the beautiful Jess would be into kissing a girl… And I’m okay with that.

Aaliyah was a singer in a league of her own, and that sexy way she moved in every little crop top and tight leather pants… Maybe that’s why it’s become such a big aesthetic among millennial lesbians these days. Okay, maybe we don’t do tight leather pants, but sports bras and sweatpants? I can get on board with that one every single day, and if you inject some glam into it, too, you’re channeling some Aaliyah – and I don’t think anyone is going to complain about that.

I have to admit… Shakira is one of my biggest straight-girl crushes. She’s always showing off her midriff, which I really enjoy. Plus, she’s also super petite (I think she’s under 5 feet tall!) which I also seriously like in a woman. And, she’s got the confidence for a line like “Lucky that my breasts are small and humble” – so I’m pretty sure she’d never shame me for my flat chest. Score.

Okay, so it’s not the t.A.T.u song that most people associate with being gay – but bear with me if you haven’t seen this one yet. There are literally hundreds of girls in short plaid skirts, button-up shirts, and ties. Thousands, even, maybe. (I never actually counted the girls.) And they’re marching like they’re actually proud of demanding love… Hey, how does that sound familiar?

Long before Janelle Monae pulled off the suit thing, Mya made it happen with My Love is Like Wo… And whoa is right. This song pretty much embodied every chance that we had of Mya being gay, and although I’m pretty sure she’s actually not, she’s definitely a master of multiple disguises. Just try and see if you can watch the video and not find a single outfit you don’t find is sexy. Go ahead –I’ll wait.

Okay, this one is significantly newer than many of the other songs on this list, but if you watch this video and don’t think a) these two should kiss already; b) her boyfriend is a complete dick, and c) she deserves to be treated so much better, then I really don’t know what to tell you. This song embodies pretty much every inner emotion that most of us felt when we were working to come out. (And PS, there is a happy ending – so yay!)

Personally, Dirrty was one of my least favorite Christina Aguilera albums… But this video doesn’t even try to deny what it’s about, and it definitely gets the intended response. Christina Aguilera has always been a huge crush of mine, and this was definitely one of the songs that opened my eyes to that.

Aaliyah – Are You That Somebody

Oh, here’s the sports bra and sweat pants. Yep, that explains it. She’s often been regarded as one the most beautiful women who ever lived, and it’s not hard to see why. She managed to ooze sensuality everywhere she went, without being vulgar or explicit about it – how can you go wrong?

Does this one even need any words? Probably not, but just in case… This is the song that single-handedly taught an entire generation that voulez-vous coucher avec moi was the only French you’d ever need to learn to get some action.

Between these two undeniably-gorgeous women, their perfectly-synchronized gyrating, and the story that we’ve all found ourselves in at least once (whether with a man or with a woman), this is a power anthem that will also help bring sexy back. Too bad it doesn’t work out like that for us normal people.

This video involves literally getting up the courage to go kiss a girl at a party – how many of us have been there before? Sure, there are straight couples at this party, but let’s be honest: You weren’t paying attention to them, and neither was I.

Shakira – Can’t Remember to Forget You

Again Shakira is in a video that we know is super queer-bait-y, but we just can’t resist… This is the stuff dreams are made of. If you have ever wanted to know what your Shakira-and-Rihanna fantasies would look like if they actually played out, this is it.