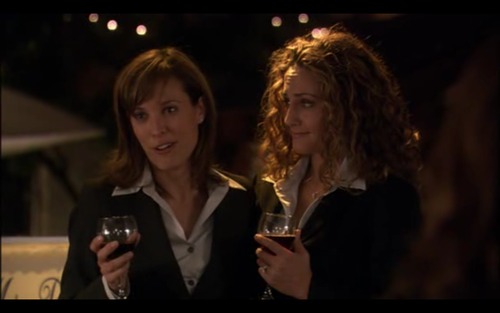 Lesbian relationships on television are generally love-hate. Whether we love one character and hate the other, we love the representation but hate both characters, or whatever the exact storyline is, it’s hard to find a lesbian couple we actually like and want to learn more about.

What is it that has us hating these women so deeply? Well, no two are exactly alike, but generally, they’re relationships we wouldn’t really want to see in our own lives: The women break each other’s hearts in such terrible ways and still stay together? WTF? No one wants to admit that happens in real life, so we don’t want to see it on TV, either.

How many of these couples make you angry, too?

Shane and Jenny (The L Word)

Truly, The L Word brought us so many relationships to hate – but Shane and Jenny is one of the most universally hated ones. Realistically, we couldn’t picture Escape Artist Shane hooking up with someone with so many obvious attachment issues – ahem, Jenny – or crazy narcissistic Jenny just completely getting over the fact that Shane literally just hooked up with Jenny’s girlfriend.

No matter how much Jenny might be a clinger or a hypocrite, she wouldn’t forgive Shane that fast. And the only way that Shane would have been able to pick Jenny after everything that her friends constantly told her would be if she was still picturing Season One Jenny, the sweet and innocent one.

But Shane and Jenny barely even knew each other back then – Shane had to have been able to see the crazy hanging out.

Dawn Denbo and her lover Cindy (The L Word)

It’s not too often that you can predict the catastrophe that is a particular relationship right from the onset. One of these rare examples is Dawn Denbo and her lover Cindy from She-Bar in The L Word. These two are obviously deranged from the very beginning – I mean, who wants to be constantly referred to as someone’s lover? Not only does this set a precedence of ownership, but it also implies that Cindy is only good for one thing – and Dawn isn’t the only one she’s getting it from.

Then again, Dawn isn’t exactly a peach either. Would I say she deserved to be cheated on? Probably not – but she definitely deserved to have some bad stuff happen to her.

This is a relationship that literally only exists to fulfill a possibility once marriage equality was legalized in the United States. Literally – this was confirmed by series co-creator Danny Strong. These two don’t love each other, and they belong to that portion of the (hypothetical) queer community that anti-equality advocates say will destroy the fabric of “traditional marriage” – and as such I’d like to formally reject them as representatives of lesbians and bisexual women.

Samantha and Maria (Sex and the City)

Who would have ever pictured Samantha with a woman? Answer: No one, because the writers didn’t let us believe there was a chance. Then, suddenly, plot twist – she likes the ladies, too. To prove this, she ends up with a woman she has nothing in common with – no chemistry, even. We just don’t like that. And then when Maria has to basically turn crazy before they break up? Yeah, I don’t buy it – there wasn’t even anything there to start with.

This is one that was pretty much doomed from the start, even if fans didn’t want to admit it right away. Realistically, if you leave your husband for your girlfriend, it’s probably not going to work out too great. When Tammy reveals her “true colors” and basically refuses to even acknowledge Sarah’s kids – hello, they’re part of your life now, too – Sarah gets out before things get too horrible. Of course, if Sarah had just left her husband before hooking up with someone else, maybe this whole situation could have been avoided. I guess we’ll never know, since the two both ended up bitter and single and alone.

Okay, so these two were never really a couple, but the writers let us think they were going to go there for just a little too long. (Shame on you for intentionally queerbaiting a seriously believable queer character, by the way – not nice!) Anyway, the writers let us think that Emily and Sara were actually going to become a thing – and then had Emily knock her upside the face. You go, Emily.

This is another one that had me yelling at the TV – but Em hadn’t learned yet. I mean, would you be able to form a relationship with someone who legit just tried to kill you a few episodes back? I couldn’t, but maybe that’s not a deal-breaker for our Emily. There are more than a few times when Paige royally screws up and I just wanted her to move away or get taken by A or something. Sigh. At least things finally ended – even if it did take just a little too long.

Maybe I’m just a little bitter about seeing someone “try out lesbianism” as a way to deal with their boy problems, but Adriana and Gia’s relationship was a mess of stuff we don’t want to deal with. It even spawned a music video – a terrible, terrible music video. Seriously, if you haven’t heard the song, take a listen and see how much angrier you are at the couple afterward.

It’s rough to be with someone who refuses to come out of the closet, and while it’s a completely respectable choice to stay in the closet, it’s not fair to force someone else back into the closet, essentially, to suit your own needs. It’s not her fault you’re not out of the closet, and it definitely wasn’t her choice. These two weren’t bad people, but they weren’t right for each other – no matter how cute they were together.

Nikki and Dutch (The Strain)

I love Dutch so much – even if she is a bit wishy-washy in her relationships. But I’d rather see her with Fet than Nikki. Hello, Nikki completely abandoned you for a long time, and stole all your stuff. Why would you even consider getting back together?! Stick with Fet – he’s good for you, and he’ll actually step up and help save the friggin’ world. Nikki would rather fight with you than fight next to you. You deserve so much better!

Call me crazy, but the trope about an ex coming back pregnant and the two getting back together for this new family is… Strange. Maybe it actually happens, what do I know – but this couple showed why it’s probably not the best idea – at least not for everyone.

Lesbians aren’t just interchangeable – and the pairing of Willow and Kennedy definitely lacked the depth that Willow and Tara shared. This whole relationship seemed like an excuse for gratuitous onscreen canoodling, and it really didn’t feel like Willow gave a rat’s ass about Kennedy. (Not that she should have been in love with her or anything, but there should have been some chemistry somewhere.)

This couple basically exists to remind us that rich person + rich person does not automatically mean their relationship will be happy and successful and magical. In fact, these two are pretty messed up right from the start. This is what happens when you cheat on your wife – be the bigger person and break up before pursuing the side chick! Come on!

Dana and Tonya (The L Word)

Tonya might just be the most horrible girlfriend on this entire list – I mean, she allocated Dana’s money to herself, and killed her cat. Who in their right mind would get engaged to someone like that?! You mess with animals, you get an immediate “no” from me, and how about a little autonomy in finances, too? If your woman wants to give you some money, she should feel free to do so without any pressure from you. Especially if you’ve already got your own decent paying job. Buh-bye, Tonya, we won’t miss you.

Lindsay and Melanie (Queer as Folk)

These two are basically the epitome of lesbian negative stereotypes – from their clothes, to their infidelity, to their man-hating ways (we’re looking at you, Melanie). It was one of the first lesbian relationships openly shown on TV, so we really wanted to like the couple. But it’s obvious that this show was written to cater the gay men and not the lesbians. It’s almost as if it’s denying the existence of lesbians in the Pittsburgh gay scene entirely.