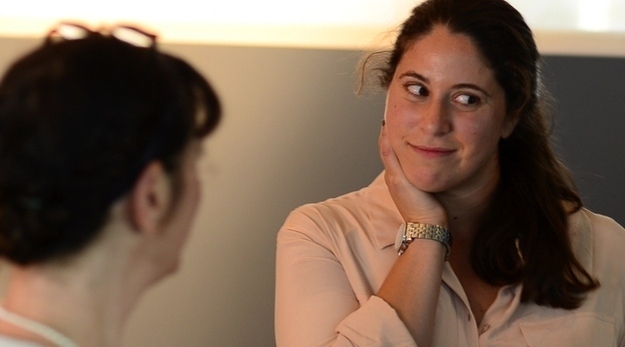 Ladies, let’s face it. Being gay is like being a member in a top-secret society that everyone knows about, but nobody understands. In some ways, it’s even more difficult now that we’re gaining more visibility in the mainstream media – because a lot of the things that are associated with us simply aren’t real!

Here are 16 things that all lesbians know without even thinking about it:

15. Tongue rings are NOT magic.

Most gay bars cater towards gay men, not to lesbians. I’m not really sure why that is, and hopefully your local hotspot isn’t like that – but probably 75% of the gay bars I’ve been to were mainly gay guys and straight women with their gay best friends.

Okay, this isn’t strictly a lesbian thing, and it’s not even all lesbians. But if you think of every lesbian you’ve ever been with, chances are, there’s at least one crazy one. (And if there’s not, maybe it’s you!)

Unless you’re attracted primarily to butch women, it can be pretty tough to find a girlfriend in the “real world”. Most likely, you’ve looked online, or hit up gay bars (only to find that they were mostly dudes… what’s up with that?). Even among other lesbians, femmes are pretty invisible.

10. Not all lesbians are vegetarians.

I really have no idea how this stereotype started. I guess since we don’t like “sausage”, we can’t like any meat… Right? But seriously, lesbians are no more likely to be vegetarians than anyone else.

It’s fun to play around in drag every now and then, but drag kings have it much harder than drag queens do. After all, it’s easy to tuck something between your legs and add a little padding – binding your chest and your hips takes a lot of skill.

8. Lesbians will pretty much watch anything with lesbians in it.

7. You will get asked for threesomes… Regularly.

Even the least-conventionally-attracted lesbians will hear that they should join some guy and his girlfriend, or some girl and her boyfriend. We are sexualized to the point where a 6 in the “straight world” somehow gets bumped to a “10” in the “lesbian world”. And if you are conventionally attractive? That 10 turns into a 20 (and they think you’re not really gay anyway).

Especially with straight girls stealing our fashion (I know, I know, fashion belongs to everyone), just because we think someone is gay doesn’t mean she really is. A lot of the time, it’s just wishful thinking.

5. Your exes are going to hook up with each other.

Since the lesbian dating pool is relatively small, and a lot of women limit their choices even further by rejecting bisexual women (tsk, tsk)… At least once in your life, one of your exes will have sex with (at least) one of your other exes. I’ve got an ex who has slept with three of my exes, that I know of – after a while it’s not even weird anymore.

What’s even worse is when they get offended when you set the record straight!

3. Some straight girls will hit on you.

Not sure if they think it’s funny, if they’re questioning themselves, or what, but there’s always gotta be that one straight girl that messes with your emotions…

2. People will ask why you don’t give guys a chance.

Sometimes it’s your family members. Sometimes it’s a well-intentioned friend who thinks your life would be easier if you’re straight. A lot of times it’ll be straight men who think they can turn you. And, occasionally, it could even be your gynecologist. (Seriously… Happened to my girlfriend one time. Akward!)

Finally, NO, we don’t all know each other!

We probably want to, but no, not all lesbians know all other lesbians. That would be so weird – can you imagine if we were all telepathically linked? Think of all the things we could accomplish!

1 thought on “16 Things Only Lesbians Know”

PrevPreviousThe Smarter and More Independent You Are, The Harder It Is to Fall in Love
Next5 Great Wedding Destinations for Lesbian CouplesNext