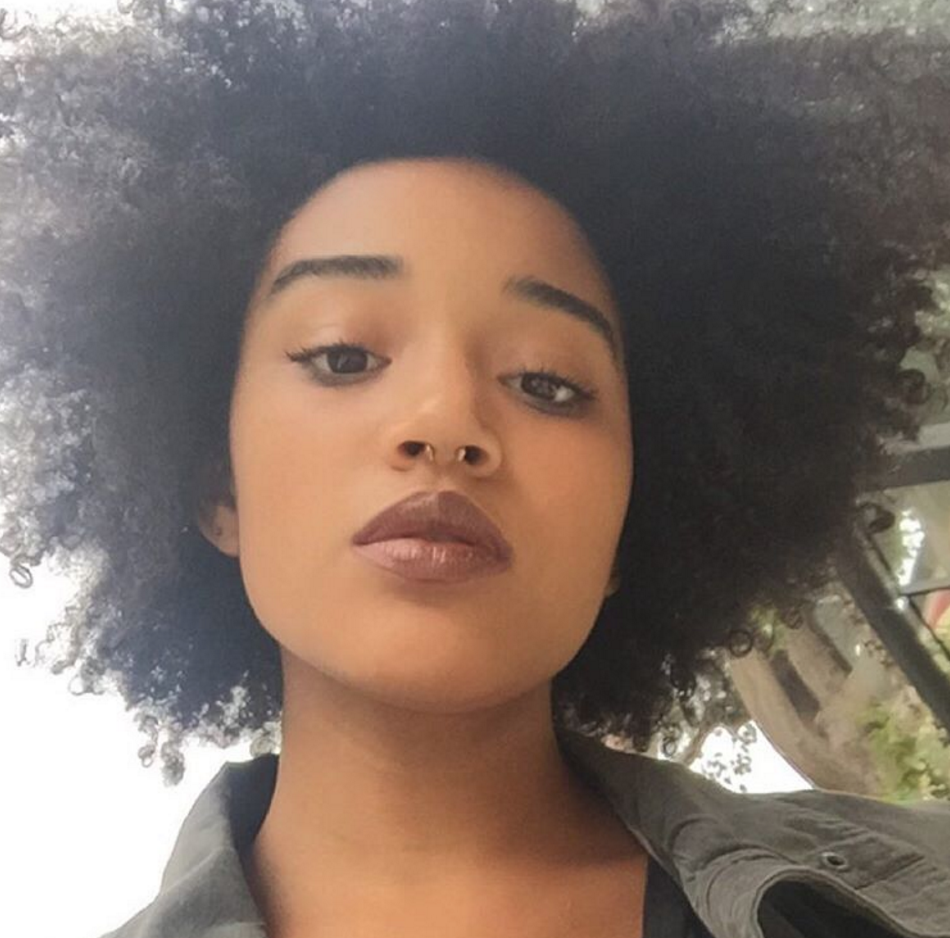 Amandla Stenberg, the actress who played beloved character Rue in the first Hunger Games film, revealed that she is bisexual in a heartfelt video on Thursday.

The 17-year-old actress opened up about her sexuality while taking overTeen Vogue’s Snapchat account, telling fans about how difficult it has been to keep a part of herself hidden.

The Hunger Games star spoke about identity and the other women like Solange Knowles (who interviewed the star for the magazine’s January issue) and Ava Duvernay who have inspired her in being herself.

Talking in the video, she says:

I cannot stress enough how important representation is, so the concept that I can provide for other black girls is mind-blowing. It’s a really really hard thing to be silenced, and it’s deeply bruising to fight against your identity and just mold yourself into shapes that you just shouldn’t be in,”

As someone who identifies as a black bisexual woman, I’ve been through it, and it hurts and it’s awkward and it’s uncomfortable. But then I realized, because of Solange and Ava Duvernay and Willow [Smith] and all the black girls watching this right now, there’s absolutely nothing but change. We cannot be suppressed. We are meant to express our joy and our love and our tears, to be big and bold and definitely not easy to swallow. I definitely believe in the concept of rebellion through selfhood, and rebellion through embracing your true identity, no matter what you’re being told. Here I am, being myself, and it’s hard and vulnerable, and it’s definitely a process, but I’m learning and growing. Thank you for supporting me and doing this, and thank you to Teen Vogue. This is just the beginning, though; we have a lot of work to do for all women of color. We need more representation in film and television. We need our voices to be louder in the media. And not just women of color—bisexual women, gay women, transgender women, mentally ill women. I’m sick of all the misogyny and homophobia and transphobia that I see around me, and I know you are too. Thank you for listening and goodnight.”

This is especially powerful coming from someone so young (17!). There are still so few public figures that are both black women and out, and Amandla talking about intersectionality is certainly something to be celebrated. Young women that are fans of her work will be inspired by her words and actions, just as we are today.

I think that as a black girl you grow up internalizing all these messages that say you shouldn’t accept your hair or your skin tone or your natural features, or that you shouldn’t have a voice, or that you aren’t smart,” Amandla told Teen Vogue. “I feel like the only way to fight that is to just be yourself on the most genuine level and to connect with other black girls who are awakening and realizing that they’ve been trying to conform.”

Next up for Amandla, the film As You Are, where she plays a young girl whose friendship group is the focus of a police investigation in the early 1990s.

"There's a secret language between black girls destined to move mountains and cross rivers when the world sometimes tells you to belong to the valleys that surround you. You feel it like a rhythm you can’t shake if you even dared to quiet the sounds around you. Amandla (@amandlastenberg) knows it all too well. So here we are, connecting as non conforming black gals. Connecting as girls who recognize the borders that have been built around us, but tearing them down while coloring outside every line." – soul healing honey mama Solange (@saintrecords) I think that when you’re a black girl and you grow up you internalize all these messages. Everywhere you look tells you that you shouldn't accept your hair, or your natural features, or that you shouldn’t have a voice, or that you aren’t smart. In terms of my evolution I think those internalized messages built up in my mind until I was given the tools to recognize the situation. And understand that no, there’s nothing wrong with me, these are just that these are just messages that we’re fed. I feel like the best way to deal with that has been just to be myself and connect with all these other black girls who are awakening and realizing that they’ve been trying to conform; and the only way to fight that is to be themselves on the most genuine level. My undying gratitude to @teenvogue for giving me the opportunity to be myself. All of my love to all of you for giving me the confidence to be genuine. Our soul baring is our power. #RepresentationMatters #blackgirlmagic