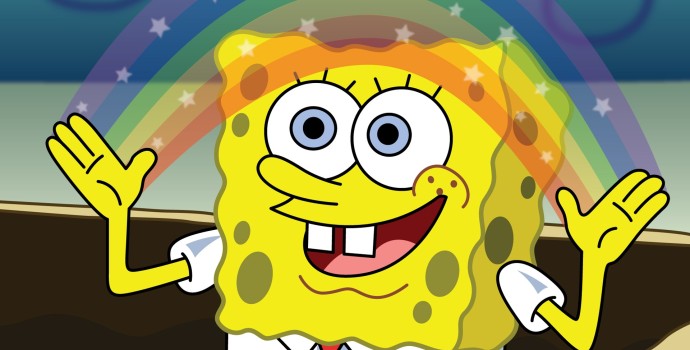 SpongeBob isn’t explicitly gay, but it is a queer show – at least, according to queer theorist Daniel Spielberger…and many furious Christian organizations.

The show has always raised a lot of eyebrows from LGBTQ viewers and conservative viewers alike. It has been accused of making children gay, and fat, and sex-crazed.

You be the jury. Is SpongeBob as queer+radical as conservatives fear?

1. SpongeBob and Patrick adopt a clam and prove that traditional gender roles lead to the degredation of families. 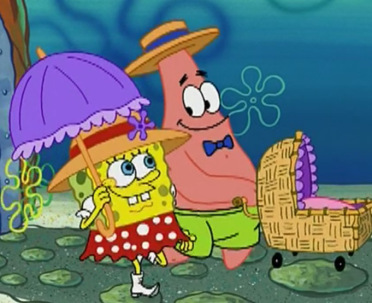 Why is it gay? SpongeBob and Patrick, two men, start a family together. Evil!

How is it corrupting children? It teaches children that people of the same sex can parent a child, and that when those people force themselves into traditional roles – SpongeBob becomes a housewife and Patrick gets a fulltime job – then families fall apart.

PATRICK: Oh! I wanna be the mom!

SPONGEBOB: I don’t think you can be the mom, because you never wear a shirt.

PATRICK: You’re right. If I was your mom, this would be kinda shocking. Just call me daddy! 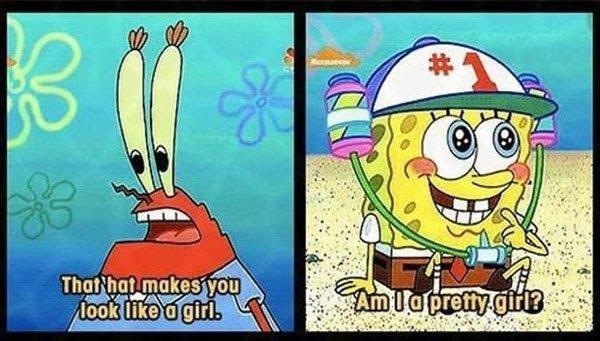 Why is it gay? Mr. Krabs attempts to force traditional gender roles onto SpongeBob, who subverts these gender roles by embracing traits ascribed to women.

How is it corrupting children? It teaches children that misogyny is not okay. It also teaches boys that they can be pretty girls. Evil!

KRABS: That hat makes you look like a girl!

SPONGEBOB: Am I a pretty girl?

3. SpongeBob and Patrick ride a nearly naked David Hasselhoff through the ocean without doubting their masculinity. 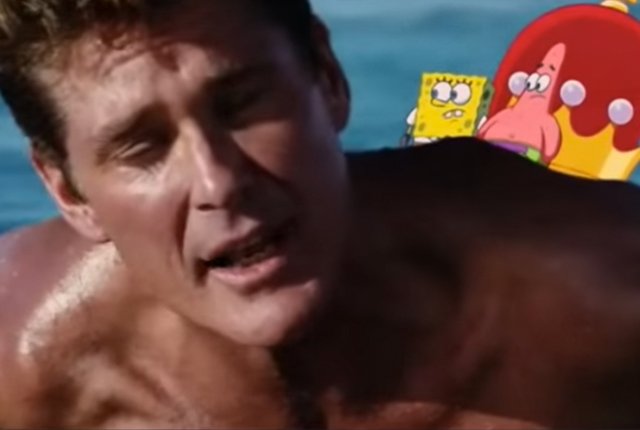 Why is it gay? Two male characters are happily, eagerly riding on the naked back of a very toned man with no respect for heterosexual norms. If they rode on the back of a nearly naked woman, that would be understandable – men should assert sexually-charged masculinity at all times.

How is it corrupting children? It teaches children that they can physically interact with a person of the same sex out even if it “looks gay.” Children need to learn that if something looks gay, then it’s definitely evil and should be shamed!

SPONGEBOB: Oh no, how will we ever get back to Bikini Bottom now?

DAVID HASSELHOFF: I can take you there.

SPONGEBOB: Who are you?

SPONGEBOB: So, uh, where’s your boat?

4. SpongeBob gives Valentine’s Day gifts to everyone in Bikini Bottom, irrespective of gender, disproving the idea that only romantic love has value. 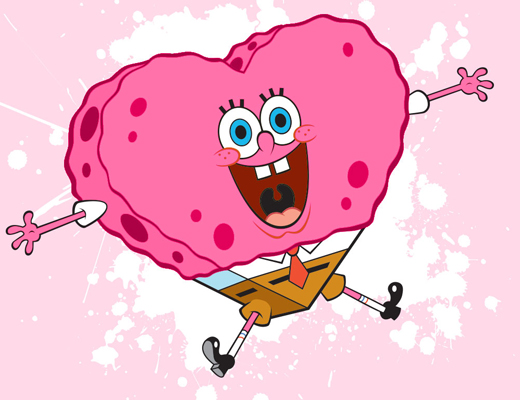 Why is it gay? Valentine’s Day is traditionally for monogamous, romantic love. However, this episode shows SpongeBob giving elaborate gifts to nearly every citizen of Bikini Bottom. This seems to suggest that SpongeBob has an affinity for queerplatonic relationships: emotionally rich and expressive relationships that blend the line between platonic and romantic/sexual. Or, SpongeBob could simply be asexual, valuing platonic relationships above all else.

How is it making children gay? It shows children that not everyone needs to fall in love to be happy. Evil!

FRAN: Hey SpongeBob, I just wanted to thank you for this box of chocolates.

PATRICK: And even though I was expecting more…

[A man with roses walks up]

DAVE: Thanks for the roses, SpongeBob. Happy Valentine’s Day.

SpongeBob: You too, Dave.

PATRICK: And not that it matters that we’ve been friends for so long…

[A woman walks by with a bike]

FEMALE FISH: Hey SpongeBob, thanks for the bike! [talking to Patrick] Can you believe this guy? I just met him this morning!

SpongeBob has been queering television screens since 1999. What’s your favourite (and gayest) moment from a children’s TV show? Leave your answer in the comments!

PrevPrevious‘Liberty’s Secret’ Is A Hilarious, Political Lesbian Musical
NextJoLivi Talks Sexuality, Writing Music, And The Positive Support She Receive From Her FansNext