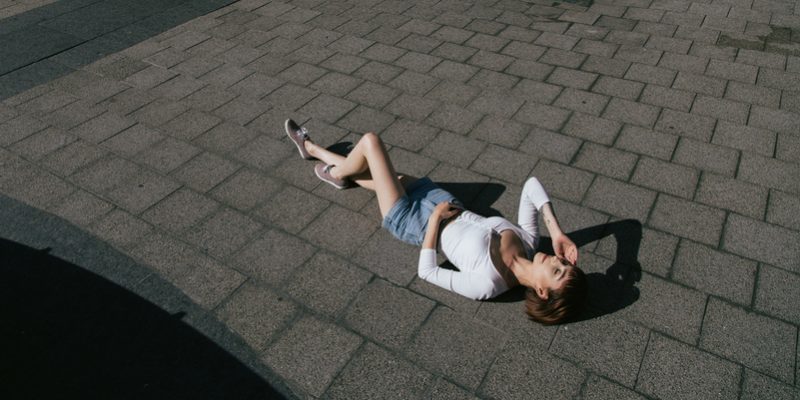 I’ve always considered myself a pretty positive person. Sure, I’m a bit snarky and sarcastic sometimes, and I sure do like to complain before I find a solution to my problems. But I always do try to find a solution to my problems, even if it takes me a little while to figure it out. I try to give people the benefit of the doubt, too, which has probably bit me in the ass more times than I can count – but I’ve found if I just keep my spirits up, without getting my hopes up, I tend to be a lot happier even when things don’t go the way I planned.

I think my foray into positivity started pretty far back. I grew up in a pretty crazy family (not that I think there’s such a thing as a not-crazy family), and it was pretty clear early on that I was going to have to get a thick skin if I was going to make it in this world.

Fast forward to my twenties and real adult life, and it turns out that a lot of these “helpful life lessons” were really just a bunch of bullshit. Maybe not all of them, of course, but enough to warrant a list. How many of these f*cked-up things did your parents or role models teach you?

1. Be kind to the people who are unkind to you.

As kids, most of us were told that respect was to be freely given, and that we were supposed to be nice to people – even if they’re not nice to us. In fact, it’s even written into the general guidelines of most organized religions. However, according to the “Law of Effect”, a theory of behavioral psychology, treating someone nicely after they have treated you badly only encourages them to keep treating you badly. You teach people how to treat you, and if the consequence for disrespect and unkindness is immediate forgiveness, the actions are more likely to continue.

Instead, when someone treats you poorly, you should respond by being direct, but polite, about the way their actions and words have affected you. Reward the behaviors that you want to continue, such as being extra pleasant when someone is treating you the way you want to be treated, and discourage behaviors that you’d like to stop. Over time, the other person will either modify their behavior to suit your expectations, or they will remove themselves from your life.

2. Keep your feelings to yourself – no one deserves to see your tears.

I’m not sure about you, but as a kid I was taught that it’s rude to openly show your emotions in front of others. It was seen as a call for attention, and I was discouraged from expressing my emotions outside of the privacy of my bedroom. This belief made it more difficult for me to share my emotions with my partners in the future, and kept me from cultivating and maintaining friendships until I was an (overwhelmed) adult.

It’s important to realize that full disclosure and indiscriminate emotional displays aren’t the goal here, either, but opening up to those who you feel a strong emotional or romantic connection with is important to building true intimacy. Rational risk-taking also helps prevent you from being labeled by others, which has shown to cause insecurities and a lack of self-identification. People who are entirely closed off tend to feel trapped in their own emotions, with no apparent way to fix the problem.

3. You need to understand why you do things the way you do.

For decades upon decades, therapists and self-appointed gurus have believed that you had to explore the root cause of the problems in your life in order to make any positive and lasting changes. Freud and his associates developed this theory, and since he’s generally accepted as one of the pioneers in psychotherapy, it wasn’t ever fully questioned. However, more recent applications have shown that there’s no sufficient benefit to examining the past – it’s only important that you focus on the present and the future.

From a clinical standpoint, mental illness still isn’t even fully understood. One school of thought says that mental illness is caused by early childhood experiences, such as abuse, trauma, or abandonment. Another says that it’s caused by chemical imbalances in the brain, attributed to the neurochemical receptors not functioning properly. Yet another says our mental health is just a conditioned response to certain social patterns. Basically, since no one really understands why we do things the way we do, it doesn’t really matter, in the grand scheme of things.

No matter what the root cause is, most therapists find that scientifically-proven methods to reduce psychological distress work much better and faster than unproven methods like analytic or dynamic therapy. It may even be possible to treat the issues without medication. This can easily translate into non-neurological behavior modification, too, and it essentially means that all you need to do to improve your situation is to focus on improving your situation – not fixing or analyzing the past.

Suppressing your feelings has known psychological implications, but expressing your emotions with excessive hostility or anger is unhealthy, too. While it’s tempting to “let the monsters out” by yelling, screaming, slamming doors, throwing things, or any other hostile behaviors, research shows that this only worsens any present anger problems. In the context of interpersonal relationships, it can even be devastating, not to mention self-perpetuating.

Instead, you should focus on finding an assertive, but calm, solution to the problem. As difficult as it may be, this may require you to remove yourself from the situation long enough to clear your mind. Once you are calm, be sure to rationally evaluate your options, and choose the one that has the best probable outcome – one that benefits everyone involved.

5. Sugarcoating is lying – blunt honesty is a virtue.

Let’s be clear; Honesty is a very important component of trusting relationships, whether romantic or not. But blunt honesty tends to hurt people, without needing to, and too much honesty can seriously damage the trust in the relationship. The large majority of relationships can’t handle full disclosure about everything, and a certain degree of withheld information is the key to positive experiences between two or more people.

Most interpersonal relationships rely on a sense of diplomacy and tact – some things should be left unsaid, or minimized, in order to prevent it from having a toxic effect on the bond. This means that we need to use our discretion to understand when our unfiltered truth is appropriate, and when a little white lie is the better choice. (Sometimes it’s a fine line, but honesty simply for honesty’s sake is rarely a good idea.)

6. Strive to be the best at whatever you do.

There are very few things in life that can achieve true perfection, and there isn’t a single human being who fits the description. There’s always going to be someone better than you, but that shouldn’t stop you from being the best that you can be. Your experience isn’t the same as anyone else’s experience, so comparing your path to theirs can cause procrastination, perfectionism, and even obsessive-compulsive behavior. (There’s no solid evidence that perfectionism causes OCD, but there is suggestion that the two are often connected.)

In order to craft the most positive life you can, it’s important to focus on excellence and improvement, rather than perfection and competition. Human growth relies on learning and adapting to new situations, but it doesn’t depend on your placement in relation to other people. Don’t worry about what other people are doing – do what you need to do to be better than you’ve ever been before, but don’t try to reach someone else’s finish line.