As far as queer representation in television goes, it’s a really hit-and-miss game. Some characters are so gay that it hurts, while others play into that “bi-curious phase” stigma that affects so much of our bisexual family. No matter what the specific problem is, it’s really hard to find a show that actually treats their LGBT characters fairly. (And, by “fairly”, we mean like real people – not like plot devices.)

What is so hard about making a believable queer character? Especially since we must assume that they’re putting them in their shows for their queer audience. Like we’re not going to notice that they’re a terrible caricature of us. Give me a break.

Thankfully, there are some shows that treat their LGBT characters the way we want them treated. I’ve gathered a list of 7 shows that get it right, based entirely on my own perspective. I’m well aware that there are other shows with gay and bisexual characters in them, but I don’t watch every single one. Hopefully my list will help you find a new favorite – or drop the name of one I’ve missed down in the comments!

(Note: For the sake of simplicity, I’m leaving out shows which feature primarily queer characters. Sorry, OitNB – I’ll show you some love later on, I promise. Also, understandably, this post may contain spoilers, so read at your own risk.)

While AHS might not be the pinnacle of queer entertainment, there are queer characters throughout the seasons.

These characters aren’t “special snowflakes” (usually) or sacrificed for the sake of ratings – they are no more or less likely to die than their straight counterparts.

As a huge horror media junkie, seeing queer characters placed organically within the storyline makes me happy – even if I know they’re going to die in the end.

While PLL loses some points for their “dramatic reveal” of the mentally-ill transgendered character being the big villain, they do win some of those points back for their portrayal of Emily Fields and her many love interests throughout the show.

Emily’s character is relatable because her sexual identity isn’t her only identity – it’s just one of the facets of her life. She shows that lesbians fall in love, have straight friends, and stress about the crazy shit in their lives, just like everyone else, and that we can also look smoking hot while doing it.

I’ll admit: I’m a major slasher nerd. So when I heard that Scream was being remade into a TV series, I was ecstatic. When I found out that one of the main characters was not exactly straight, I was even more ecstatic.

Audrey Jensen’s character identifies as bi-curious, but she’s explored her sexuality a bit off the camera. What I love even more about her is that her BFFs, Emma Duval and Noah Foster, don’t push her to identify a certain way – making them awesome allies, too.

Okay, so I was way, way late coming to the OB fandom (so late, in fact, that I binge-watched the first three seasons within about a week so I could catch up for the season four premiere… ahem), but the reputation held by CoPhine (Cosima and Delphine, for non-fans) had already drawn me in before I watched that first episode.

I could berate the writers for using Delphine to queerbait Cosima and the viewers, but instead I’ll point out how both Cosima and Tony exist as real people who just happen to be lesbian and transgender, respectively.

Even with this subtle bi erasure, it’s great that there are cartoons that show that being bisexual is really NBD.

Unlike the other shows on this list, Real O’Neals is actually about being gay and discriminated against, but the way they handle it is so beautiful that it deserves its own recognition.

While Kenny O’Neal’s character does play on quite a few stereotypes about gay young men, it also deals with the all-too-important message of accepting and loving yourself, and the idea that your family will come around to it, eventually. (And, if not, it’s their loss.) 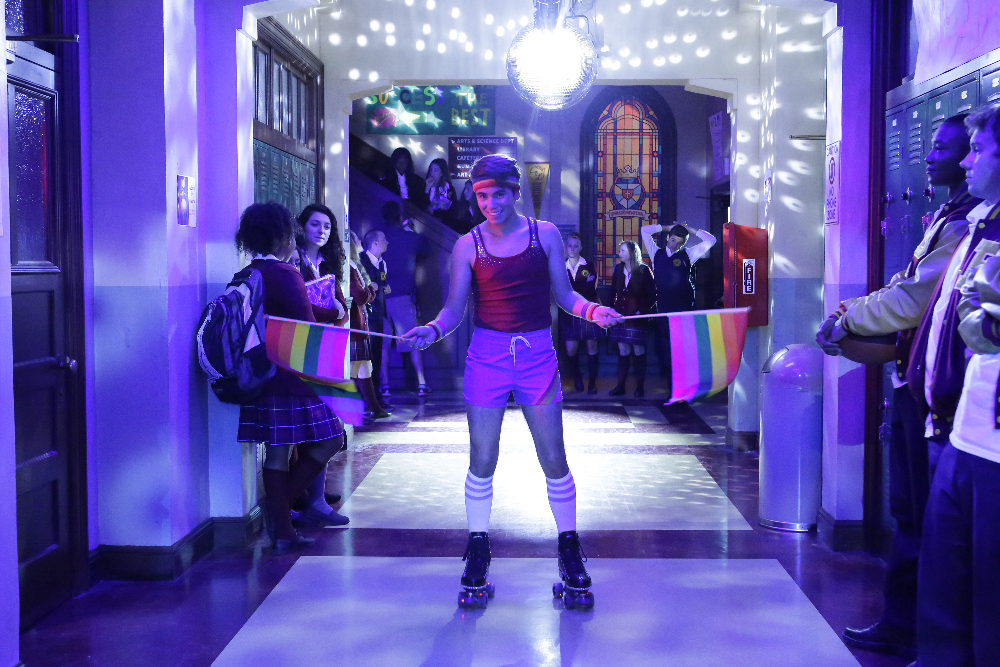 For the longest time, I tried to pretend I didn’t like Steven Universe. It’s really hard for me to find animated series’ that I’ll actively watch, as opposed to leaving them on for background noise. Still, I was shocked (in the best way possible) to see their treatment of queer characters.

The fact that two of the main characters are in a committed and loving same-sex relationship with one another, so committed that they become one entity… I suppose it could be argued that they’re playing on the stereotypical lesbian “urge to merge”, but I don’t care. I love them anyway.

PrevPreviousNatasha Lyonne Talks Being A Lesbian Icon, Who Is “Straight”
NextApparently, Ruby Rose Is single AgainNext