9 Battles We Still Need to Win 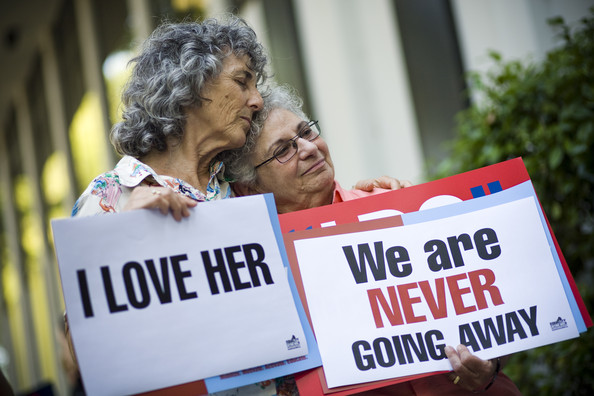 I can’t help but feel a tremendous sense of pride when I think about all the big strides for equality that I’ve seen in my lifetime. It’s inspiring, and honestly it gives me a sense of purpose in life. Ten years ago, the world was a much different place for the queer community, and we’re making obvious moves in the right direction.

Then I think about how much we still have left to do, and it makes me want to cry. I mean, the world has been changing so rapidly, but there are still parts of the world where lesbians stay in the closet for fear of being raped “until they’re straight”. There are still parts of the world where the gay community is fetishized while simultaneously being shoved back in the closet. And there are still people who don’t even have the option of coming out, because they’ll be thrown on the streets, fired from their jobs, or even worse.

I feel so fortunate that I haven’t ever been in one of these situations, and my heart goes out to those who are dealing with this type of environment. If we want true equality, we still have a long way to go. Here are 9 fights that we still have to fight. Will it happen in my lifetime? I hope so – but it can’t happen without everyone’s help and support!

While some places are becoming more and more gay and trans friendly, some places aren’t, and that’s a problem. Entire governments seek to hide the fact that people are still beaten and killed for something they can’t change. Until it’s done everywhere, we haven’t won yet.

Even in places where discrimination has been criminalized, there is a chance that teens will end up on the streets when their parents or guardians find out about their sexuality. If we can’t stop it from happening, there needs to be somewhere these teens can go to make sure they’re taken care of and protected. This is the future generation, and we haven’t won yet.

3. Better testing and sexual education for the LGBT community

Sexual education in general has made some progress over the last few years, but teens and young adults in the LGBT community are drastically underserved. There are a great deal of places around the world where sexual health classes are heteronormative or abstinence-only – neither of which is a realistic education for the vast majority of teenagers. By not giving teens the appropriate ways to protect themselves, society is practically guaranteeing that STDs will spread in these communities.

4. STD-positive shaming needs to be abolished for everyone

There are so many stigmas associated with testing positive for an STD, and truly these stigmas do nothing for anyone. The people who have heard about the shameful associations will think that they don’t need to be tested because they don’t participate in “high-risk behaviors”, which ignores the fact that there are not “high-risk behaviors” that make infections more common. You don’t need to sleep around or use intravenous drugs to have an STD – get tested regularly! In addition, this shaming leads tested-positive people thinking that they need to hide their status… Which, of course, has a high risk to spread the infection further. Talking about STDs and demystifying them will help increase the likelihood of catching the infection early enough to treat it effectively.

5. “Religious freedoms” need to be treated as discrimination when appropriate

There’s a big difference between religious freedoms and bigoted discrimination – and the lines need to be made clearer for those who abuse the grey areas. No one should have the right to impose their beliefs on others, and that needs to go both ways. My god doesn’t say I’m going to hell – so my money should be worth just as much as anyone else’s. (Although, to be honest, I probably wouldn’t want to shop at any establishment that felt I was a second-class citizen because of who I loved, so… Maybe I’m the one confused here.)

6. A restroom is for going to the bathroom, and no one should think otherwise

All the trans discrimination laws being passed – where bathroom laws say that a trans woman should use the men’s room, and a trans man should use the women’s room – are trying to invalidate real, decent people. The vast majority of people – whether gay, straight, bi, trans, cis, or what have you – are not going into the bathrooms to peep on other people. Sure, there are rare exceptions, and you’ll never truly be able to weed them all out. They’ll come in every label you can think of, and their common trait isn’t that they’re gay or transgender – it’s that they’re creeps. (And, more than likely, they’re white cis men –  but that’s just statistics speaking.)

Maybe the homeless youths from #2 can help step in and take care of the estimated 1.5 million LGBT seniors in the United States alone – or any of the aging queer community in any country. Studies show that this demographic is likely to suffer from increased mental illness rates, extreme poverty, physical disabilities, isolation from their biological families, and harsher discrimination than their heterosexual peers. This is the generation that raised us, and our parents (depending on how old you are) – shouldn’t we treat them with care and respect? We haven’t won until our seniors are taken care of, too.

8. Nondiscrimination protections need to be put in place, everywhere

It’s a scary thought: In almost every US state, it’s still entirely legal to be fired on the basis of your sexual orientation or identity, and in places where this type of discrimination is illegal, there are often “loopholes” – namely that the boss doesn’t need to say why you’re being let go. I’ve actually dealt with it at a few previous jobs, and it really is this hurtful thing that you don’t want to believe is real. What’s even worse is that society has conditioned us to think it’s all in our heads – even when it’s as clear as day.

Criminalizing hate groups isn’t something that helps just the queer community – most of our world has someone who’d hate them for something. The idea that you can rightfully hate an entire group of people without knowing the first thing about them is horrible, and it perpetuates a violent culture hell-bent on revenge. That’s not the type of world I want to live in, and we haven’t won until these groups are gone for good.

2 thoughts on “9 Battles We Still Need to Win”