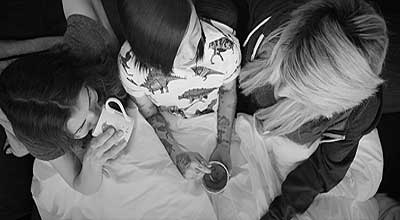 This has been a year full of a number of monumental “firsts” in the gay community. With all these firsts, it doesn’t make sense to me that there are things that we are still (collectively) getting up in arms about. Sure, sometimes people are out against us – but does that really mean that everyone is out against us, always?

Don’t get me wrong. I’m all for crying out in the face of oppression, and in standing up against those who try to keep us down. But most of the time, we’re not actually the victims we want to think we are.

It’s pretty much become a common belief that sexuality is pretty fluid. Why, then, do we assume that a “straight girl is acting gay” when it’s entirely likely that she is genuinely questioning her sexuality? Think of when you first came out – most of us weren’t 100% sure right away. Instead of assuming that girl is just vying for attention, try giving her a chance. She might surprise you.

Once upon a time, lesbians were the ones guilty of claiming clothes that “didn’t belong to us”. Lesbians used to face discrimination for appropriating the fashion choices of men, and now we take it upon ourselves to “own” these clothes (and of course, flannel) and we are disappointed when we see a straight woman wearing them. Lighten up! Clothes are clothes, and they belong to everyone.

So you’ve always been super feminine, but lately you want to dress more masculine. Or maybe you’ve always been more dominant, and now you’re curious about being more submissive. Ladies, if your personal style no longer matches how you feel – why do you have to conform to the label you previously chose for yourself? Sometimes these labels may be 10, 20, even 30 years old. There’s no rule that says you have to stay the same.

It’s amazing to me that, in this day and age, there are still so many people put off by bi girls. When we think of the individual components that make up our hesitation, it’s obvious that they don’t make a lot of sense – but still many of us choose to specify that we won’t date a bi girl. The truth is, a bisexual woman is no more likely to cheat on you than anyone else. A difference in sexuality does not mean that the other person is a pervert – remember it used to be the gays that had to prove that?

I have seen a multitude of posts on social media lately about “shitty allies”. What in the world makes an ally bad? Just because the person asks a million questions that you don’t want to answer, doesn’t mean that they mean any harm. Of course, you should let your allies know if they are asking questions that make you uncomfortable, but generally if they are asking questions, it means they want to understand. Lighten up!

Unless the change happened while you were dating her, it’s really none of your business. And, honestly, even if you were with her when the change happened – it’s not really her fault. As we’ve said previously, sexuality is fluid. Certainly not for everyone, but for enough people that you can’t really hold it against them.

7. Bad portrayals of lesbians in the media.

Okay – this one is probably going to get me a lot of backlash. But let me explain something to you: Complaining doesn’t accomplish anything unless you’re actually willing to do the work to change things. Not everyone is cut out for acting, or singing, or any one specific outlet, but if you’re not working to change things, you’re indirectly part of the problem.

8. Every little thing that could be homophobic.

I get it – sometimes, people are homophobic. But that doesn’t mean that everything that happens to you is a result of someone being homophobic. I see so many examples on social media of people who feel that they were slighted because of their sexuality, when there’s really no way that the person who did the offending had any idea that they were gay. Not everything is about gay versus straight, and to keep assuming that everything is just makes the rest of us look bad.

The whole notion of being “friend zoned” is sort of ridiculous. Just because you do nice things for someone does not entitle you to sleep with them – no matter how much you want to. We remember these things when it comes to someone hitting on us, but sometimes we forget when it comes to us hitting on someone else. Be realistic!