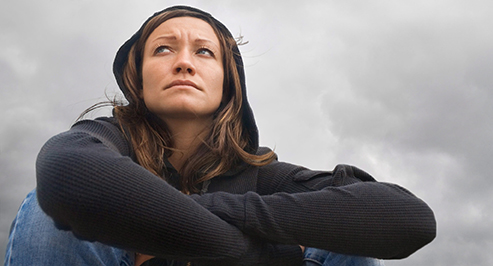 Confidence is a fickle creature for many women. If we show too much confidence, we’re portrayed as arrogant, bossy, or promiscuous. If we don’t show enough confidence, we’re seen as unremarkable, mousey, and insecure. What’s a girl gotta do to be treated with respect?!

Well, the short answer is, you need to stop caring what other people think about you – but sometimes that’s easier said than done. Whenever you find yourself having a particularly hard time with it, take note of the following mantras.

1. Self-doubt is all in your head.

Once you realize that self-doubt is literally a figment of your imagination, you can start to repair the problem. Why do you feel like you can’t do or be what you want? Chances are, the fact that you want it says that your innermost opinion is that you can and should. The only thing getting in the way is the little voice telling you you’ll fail.

Most often, the motivation for self-doubt lies hidden in something from your past. Did you attempt it before and fail? If so, maybe you have learned and grown since then – which makes you more likely to be successful. Did someone important to you tell you that you’d fail? Maybe that person has a low opinion of you, but rather than reflecting that in your opinion of yourself, you should let it reflect on them. Someone’s inability to see your value does not diminish your worth.

2. Haters are going to hate, no matter what.

There are going to be people who will accuse you of cheating if you succeed. There will be people who envy your success and try to use it against you somehow. Instead of giving into the negativity and let them talk you out of trying, focus on handling your own business and don’t worry about the people trying to drag you down.

It’s pretty common knowledge that a negative attitude breeds a negative result, and this is often the case why so-called “haters” have a hard time finding their own success. Instead of picking apart how a person has done well for themselves, they take the opportunity to express their jealousy in a passive aggressive way. They think by tearing you down, they’ll look better in comparison – but most people know better.

Even if you do try and fail, that doesn’t mean that you’re a failure. It just means that you didn’t succeed. Tack a “yet” on the end of that and suddenly it’s a more empowering slogan. Right? Try it out for size: “I haven’t failed; I just haven’t succeeded yet.” Feels good, doesn’t it?

The best thing about acknowledging that no one is perfect is that you give yourself permission to get it wrong. You understand that no one was ever a pro their first time out the gate, and you let go of the idea that you have to be. After all, practice makes perfect, so the more chances you give yourself to fail, the more practice you get – and in turn, the closer you get to success.

4. A jack of all trades is a master of none.

As a teenager, I had a goal to do it all – I wanted to have every job out there. The only problem is, in order to fit everything in, I couldn’t stick with any of them very long. I worked at an ice cream shop, and on a midway, and in a retirement home, and for a tutoring service, and as a writer, and as a housekeeper, and as a secretary, and in a factory, and in a tow company, and in a stock room… All before I turned 21! This sounds pretty exciting, but the fact is that I wasn’t very good at most of those things because I didn’t stick with them for very long.

If you release yourself from the responsibility of only doing things you’re good at, you’re going to miss out on a lot – and it’s never fun to feel like you’re missing out. Self-doubt comes from the idea that we have to be good at everything, which is literally impossible to attain. Let yourself try new things without worrying about how good you are – that comes later!

5. Self-doubt is an excuse.

There, I said it – self-doubt is a poorly-veiled excuse to not do things. It’s lazy, and it’s not fair to you or anyone else. If the fear of failure is strong enough to keep you from trying (instead of motivating you to succeed), you probably don’t really want to do the thing you think you want to do. Think about it: If you already “know” you’re going to fail anyway, what’s the point in giving it your best effort?

In general, people who struggle with self-doubt are not automatically lazy, but if we think we’re not going to enjoy something, we’re less likely to give it our all. And if our enjoyment of something is entirely dependent on whether or not it comes naturally to us, then it’s not as important to us as we thought.

I’m sure you probably think you’re honest about the things you enjoy, but most people are guilty of fudging the details. We pretend we’re not as obsessed with the book we’re reading as we really are. We pretend we’re more into the person we’re having sex with than we really are. And maybe we even pretend to love our job because we like the paychecks it brings in.

Our passions themselves get flipped around in this mess. Something we really love gets pushed to the side because it’s not helpful to us, or we’re not good at it. Meanwhile, thinks we hate doing (but are very good at) become our number one priority. These things might pay the bills or bring us recognition, but if that’s your only source of joy, you’re still missing out!

7. Embrace the “I want” mentality.

This seems counter-intuitive, so let me explain it a different way: If you’re worried about what everyone else is thinking of you, you’re making a huge assumption. For all you know, they aren’t even paying attention! We are our own harshest critics, and many of us choose to lay the blame on other people. What’s even worse is that we are denying them their right to actually have an opinion, because we never try. We don’t even give them the opportunity to judge us before we say that they have!

8. You are not who you were yesterday.

Every day is a new chance to tackle your problem head on. Maybe you failed before, but that doesn’t mean you’ll fail this time! You have learned since yesterday. The world isn’t in the same place as it was when you went to sleep. Literally everything is different – so what makes you think your luck won’t be?

Of course, this mantra works best for those who make a conscious decision to improve themselves over time. Very little happens on its own, and you’re not going to magically transform into some supreme being overnight. But you are never the exact same person you were. Each day holds countless experiences that mold and shape us. Remember this, and don’t compare yourself to who you were in the past – that’s not who you are anymore!

So you tried before, and you failed. Try again. Keep trying until you are completely satisfied with the results – whether that means you no longer want what you thought you wanted, or you actually take charge and win. Any other outcome is not and ending, but merely a speed bump.

Even if you resolve your self-doubt and your desire, there’s never really an ending – just a “to be continued” hanging in the air. Self-doubt is a lifelong battle, but in time it does get easier. Once you have gotten used to moving past your doubts, you may find yourself skipping some altogether. This is great – keep it up! You’re on the path to self-confidence and freedom over your own happiness.