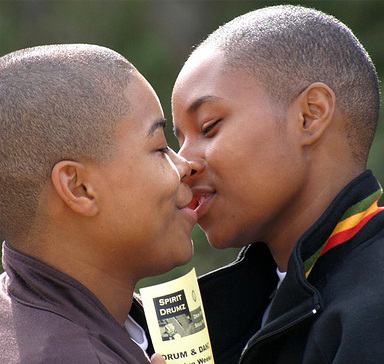 Close your eyes and think of your favorite lesbian couple. Is it tomboy Ellen and glamorous Portia del Rossi? Is it fiery Rose and dreamy Luisa from Jane the Virgin? Is it the hot lesbian stud who lives next door and her adorable girlfriend?

Is it two butch lesbians?

For most people, probably not. Mainstream television is finally making it clear that lesbian relationships are okay…as long as they’re between two feminine lesbians, or (rarely) one masculine one and one feminine one. At your nearest lesbian bar, you are more likely to see a butch lesbian hitting on a girl in heels than you are to see two butch lesbians exchanging numbers.

Why is that? Well, our patriarchal society dictates that lesbians exist for the pleasure of men – and men supposedly want to see two attractive, feminine lesbians. Two attractive women does not threaten his masculinity. Besides, some men believe that no matter how gay a woman claims to be, she’ll always sleep with him.

Western society is also becoming tolerant of butch/femme relationships. A masculine body and a feminine body reinforce traditional heterosexual dynamics, even if both bodies are female.

However, butch/butch relationships make many people uneasy. A butch woman’s mere existence is an affront to manhood – how dare a woman not exist for his pleasure! When two butch lesbians come together, not only is each lesbian spitting in the face of traditional manhood by refusing to be feminine, but they’re also challenging the feminine/masculine dynamic that many believe is necessary for a “real” relationship.

Even certain butch women claim that they would never date a non-femme, because that would diminish their masculinity – they’re not exempt from #MasculinitySoFragile. Their internalized homophobia blinds them to romantic possibility.

In Butch Lesbians Explain: Dating Other Butch Women, YouTube vlogger Arielle Scarcella explores the dynamics of butch/butch relationships, and why society’s aversion to them is so problematic.

Check out the video below.