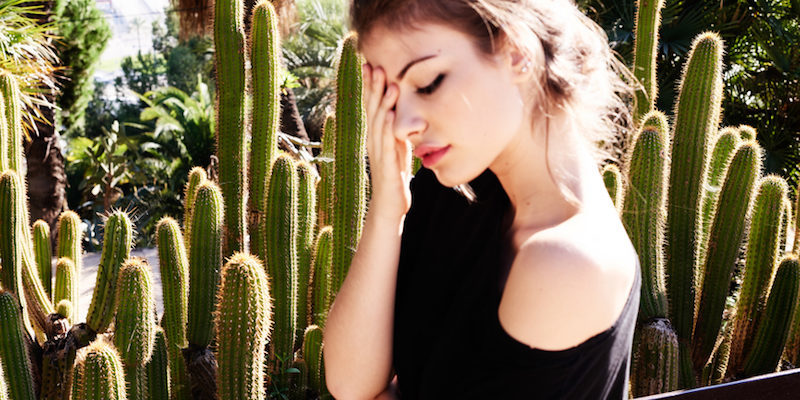 Have you ever heard the story of Narcissus? According to ancient Greek mythology, Narcissus’s mother was told that he would live an exceptionally long time, as long as he never saw himself. It was a pretty good plan, until he spurned a would-be lover (one version says a man named Ameinias, while another version says it was the nymph Echo), and was sentenced by the gods to overlook a spring – a spring in which he fell in love with his own reflection and ended up dying. The term narcissist comes from Narcissus’s love for himself, but these days it’s mostly used to talk about someone whose whole world revolves around themselves.

For those of us in the United States, we’ve probably never seen such a clear picture of narcissism as we have in presidential candidate Donald Trump. In fact, Trump embodies almost every trait associated with narcissism, including the inflated ego and overvaluing of one’s own opinions over proven facts. Sigh. Consider me grateful that this whole mess is (probably) going to be over soon, and Trump can just go back to wherever he was before the 2016 presidential race started.

(Meanwhile, if he wins, I might be taking off to join my good friends overseas. Seriously – his running mate wants to trade marriage equality for gay conversion therapy? No, thanks.)

All politics aside, psychoanalyst and therapist Lisa Schlesinger, in an article on YourTango, says that everyone has narcissistic tendencies; the official psychological diagnosis of “narcissism” is just reserved for the most extreme forms. Let’s take a deeper look.

(Please note that her article related to narcissistic parents, but I have adapted what she’s said to apply to those of us who might not have children – many of the same traits are true. Someone with a psychology degree please weigh in if I’m wrong here.)

Narcissism is a totally normal part of human development.

According to Sigmund Freud, children need to go through a narcissistic stage in order to become self-aware. But if that stage lasts beyond puberty, and is classified as “extreme,” it’s then considered a personality disorder. Schlesinger recommends psychodynamic therapies and psychoanalysis once it gets to these points, stating that “[t]hese modalities of treatment are the most direct way to address your narcissistic tendencies.” But what if you haven’t been diagnosed with narcissistic personality disorder?

A healthy amount of narcissism requires that you value your own needs.

Humans (and all other animals) have a built-in survival instinct; this survival instinct relies on the brain’s need to preserve itself before others. You absolutely are the most important person in your life, and it’s essential that you see things that way; if not, there may be other issues at play, such as depression or codependence. What might be even worse is that someone who falls on one end of the spectrum will most likely seek out someone who falls on the other end of the spectrum. We’re not here to talk about depressed and codependent people, though – we’re only here for narcissism today.

Most people fall somewhere in between the two extremes. Narcissists (whether healthy or malignant) tend to hold an image of themselves that may not be entirely true, and they become threatened by anything that challenges their self-perception. Healthy narcissism requires channeling that into motivation to better oneself, instead of taking a defensive stance on the issue and adamantly defending your own hypocrisy. Healthy narcissism also involves feeling empathy toward others, while ultimately putting your own needs – and the needs of those you care deeply about – ahead of the needs of strangers. Of course, things are a lot more complicated than that, but I’m not a psychologist – I’m just someone who enjoys studying mental illness.

Malignant narcissists use others to meet their needs, without regard to that person’s own needs.

While healthy narcissism tries to find the best solution for everyone involved, malignant narcissists treat others as tools to get the things they want, without giving anything in return. They take any available opportunity to pawn their own responsibilities off on others, such as leaving the kids home alone to go out partying. They neglect the needs of their loved ones in order to satisfy their own. They will also make cutting remarks about others, in an attempt to make themselves look better, often with little regard to the truth of the statements they make.

So, how can you tell how narcissistic you are?

Do you see other people as extensions of yourself? In other words, do you think in terms like “my partner” as opposed to “Brianna,” “my friend” as opposed to “Cassandra,” etc.? While this is a minor distinction, most people choose to refer to someone by their role within the person’s life, rather than who they are on their own.

Do you resent demands from others when they take up your time? For example, do you consider your own downtime more important than someone else’s basic human needs, or rights? Most of us support the idea of equal rights (although I don’t have any exact figures here), but we often won’t help others any more than sharing a post on Facebook or tossing a “like” on someone’s status.

Do you pressure others to do the things you like, without taking their interests into consideration? If you’ve ever pushed your partner or friend to do something you knew she wouldn’t enjoy, just so you didn’t have to do it alone, you fall into this category – sorry!

Do you submerge yourself in the lives of others, so deeply that you lose your own identity? Whether you consider yourself “____’s girlfriend,” “_____’s daughter,” or “_____’s best friend,” you fall into this category. To a lesser extent, this also applies to people who idolize celebrities – if you define yourself as a fan of someone else, you are making their existence a fixture in your life.

Are you a sore loser? Narcissists feel threatened when they aren’t the best at what they do – even if someone else was clearly better. Narcissists don’t like losing, and instead of adjusting their own tactics to get better, they blame the other person, possibly even accusing them of cheating.

Do you consider yourself better than others? Even if you keep it to yourself, you’re a narcissist for thinking it. Narcissists take apart the identities of others and assign values to them – even if those values have little to do with who the person really is.

Do you tell yourself you deserve new/better/more things because of everything you deal with? I think anyone who has ever worked retail, and then participated in “retail therapy,” falls into this particular category. (Yes, I’m putting myself here, too – I regularly spoil myself with nice things, because I feel that no one else is going to give me the things I feel that I’ve earned.)

Do you do things in order to gain recognition? The motivation behind the things you do is an important factor here. Narcissists do things for attention or recognition, instead of being self-motivated. For example, do you post selfies in workout gear to collect likes and inspirational messages? If you skip the gym selfies and updates, and instead just go to the gym because you want to improve your physical fitness, congratulations, you might not fall into this one.

Do you trash-talk others to make yourself look (or feel) better? A good friend of mine once told me that “being a hater shows your true insecurities.” He told me this immediately after I was, in fact, being a hater, talking down on someone else for having a body type that made me uncomfortable. Rest assured – this was a few years back and I’m totally over the body-shaming now – but I’d be lying if I said I never did it.

Do you stay with someone you feel is a “bad person” because it’s more comfortable than being alone? While this particular classification can go for narcissism or codependence, the key here is who your partner is bad toward. Narcissists don’t care if the person they’re dating is a total asshole to everyone else, including the other people the narcissist cares about, as long as they treat them nice.

Do other people simply “fit into” your life, instead of being a part of your life? Another subtle difference here. Narcissists “cast” people to fill roles in their lives – girlfriend, best friend, work wife, etc. – and then cast them aside when they’re no longer needed. True relationships require that you be there for them when they need you, too.

OK, you’re a narcissist. Now what?

Thankfully, Schlesinger outlined a few ways you can manage your own narcissism, once you’ve identified it. It has to be a conscious choice, or it’ll never stick – a narcissist can’t (and won’t) change just because other people want them to. If you’re ready to change your own narcissistic habits, follow the steps below.