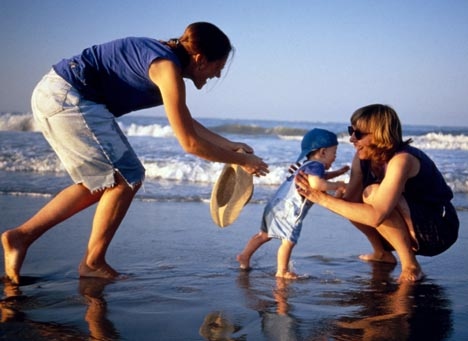 In recent years, right winged Christians like Mark Regnerus, Donald Paul Sullins and Douglas Allen, have done their best to argue that same-sex parenting is flawed, wrong and immoral.

But a new study has blown a massive whole in this biased theory, and proved what the medical community has already long known: same-sex couples make great parents.

The primary accusation against past research supporting same-sex parenting is that the samples are skewed.

Because researchers have to advertise and search for same-sex couples willing to participate, the families self-select to join the studies, and thus may be not be representative of all same-sex families.

Mark Regnerus insisted that his studies – which are sceptical of same-sex parenting – are more valid because they use data from broad population-based surveys, and therefore are more representative.

So the Williams Institute, an LGBT think tank at the UCLA School of Law, decided to call Regnerus’ bluff.

Using data from the National Survey of Children’s Health, researchers were able to identify same-sex couples who were raising children and compare them to demographically similar different-sex parents. Because few male same-sex parent households were included in the study, they focused on female couples, identifying 95 that they then matched against similar different-sex households.

The study found only one difference between the families: same-sex couples had more stress than their different-sex peers.

However, even with that distinction, there was no difference in the outcomes for their children, including their general health, emotional difficulties, coping behaviour, or learning behaviour.

Most would think a higher stress rate would have gone against the them up, but it didn’t.

Researches concluded that the lesbian mothers might be using additional support systems like parenting groups or counselling services, and likewise, their kids may also develop greater resilience skills having to defend against the stigma of having same-sex parents.

There is an obvious explanation as to why the new study found affirming results while conservatives found negative outcomes in their population-based studies.

None of the same-sex parents who had broken up or divorced were analysed in the study.

Regnerus didn’t account for family structure. In his study, he counted any child whose parent had had any kind of same-sex relationship at any point.

As a result, most of the children he counted had experienced a parent’s separation or divorce, but they were still compared against children from stable different-sex families. The resulting negative outcomes for those children, he concluded, proved that same-sex couples make inferior parents. Regnerus’ data only included two children who had been raised from birth by committed same-sex couples, and their outcomes were just fine.

Similar population-based surveys from Donald Paul Sullins and Douglas Allen used the same trick of comparing unstable same-sex families to stable different-sex families. Sullins, for example, used data from the National Health Interview Survey, and admitted, “Almost all opposite-sex parents who are raising joint biological offspring are in intact marriages, but very few, if any, same-sex parents were married during the period under observation.”

Sullins, like Regnerus and Allen, was comparing apples to oranges.

In some ways, the new study isn’t ground-breaking. There has already been scientific consensus in support of same-sex families for decades. With the Supreme Court’s marriage equality decision last year and the recent conclusion of the challenge to Mississippi adoption ban, same-sex adoption is now legal in all 50 states.

Nevertheless, some states are still figuring out some legal questions about same-sex parenting.

Several lesbian couples in Indiana, for example, are fighting to make sure that both moms can have their names on their children’s birth certificates, a fight that has played out in other states as well.

With courts continuing to weigh these important protections for same-sex families, it certainly doesn’t hurt to have another study showing that their children turn out just as great as in other families.

PrevPreviousThe Fight Goes On: Hillary Clinton Condemns ‘Outrageous’ Anti-LGBT Laws In New Campaign Video
NextWhat Being LGBT+ Is Like Around the WorldNext