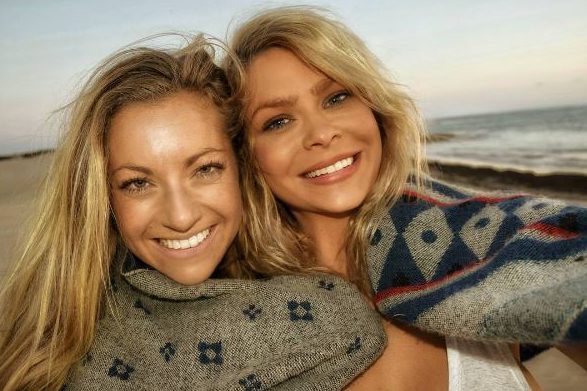 Tiffany Scanlon has opened up about her relationship with her fellow contestant Megan Marx after the couple fell for each other during the Bachelor Australia show. The dating programme involves a group of women who compete to win the affections of a single male contestant, but the girls were more interested in each other than dating the man.

When the women publicly stated they were dating they were met with a lot of criticism, some saying their relationship was a publicity stunt. Another contestant who took part in the dating show, Keira Maguire took to Instagram to accuse the couple of “faking” being together. Both Megan and Tiffany warned the 29-year-old “not to get in touch” with them anytime soon.

Tiffany has admitted this is her first ever same sex relationship and told PopSugar Australia:

No one has been more confused than me. It certainly did not happen overnight. It took a lot of hiding in the shadows trying to figure out what we were. Megan had been with other women before but for me it was (and still is) an extremely confusing time made even harder by being in the public spotlight.”

When asked why the couple decided to go public Tiffany confided:

When Megan and I decided to publicly announce that we are in a relationship (months after we started dating), we also made the decision that we would share our lives with the world in the hope that, in some small way, we might be able to evoke change.”

The relationship has also affected Tiffany’s career as she was dismissed from a Catholic school following her announcement that she was in a same sex relationship. Tiffany said:

This is not well known, but I had to resign from my job when I decided to try my luck at love on a reality TV show. My fall-back plan was to finish the year off doing relief teaching — my principal qualification — once the show had finished. The job I acquired as a Catholic high school relief teacher was taken from me as a result of my sexual orientation and it has become near impossible for us to get “normal” jobs with our public profile.”

Tiffany then went on to say that being with Megan was the ‘most rewarding’ relationship she had ever been in. Australian’s are continuing to fight for more equality for the LGBTQ community and hopefully Tiffany and Megan will give more couples in the public eye the courage to speak out about their same sex relationships.