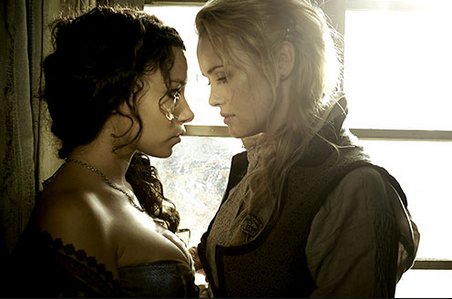 What is the queerest show on TV right now? Is it lesbian Latina sitcom One Day at a Time? Or Ellen? Or the Kristen Stewart episode of Saturday Night Live?

You have a right to be skeptical. Unlike Transparent or Orange is the New Black, Black Sails has not won any awards for its LGBT activism. But it should. The show explores – not exploits – lesbian, gay and polyamorous relationships exploits. The show doesn’t play the relationships for shock value but delves into them with utmost care. Let’s look at a few more in-depth.

(For the sake of spoilers, I won’t use names.)

The protagonists are lesbians.

As the show progresses, the relationship dissolves and evolves, but it’s never played as a cheap trick or queerbaiting. The women are fully human, and they are fully in love with each other (but they love themselves more).

Sex is used as empowerment.

One of the characters, a sex worker, doesn’t just use her body for manipulation. A devious, scheming woman who seduces men in order to control them is an old trope, but this character is different.

Even though other characters have used sex to control her, she uses it in order to heal others and reclaim control of her own body. She later becomes the madam of a brothel, where she treats women fairly.

Polyamory is a dynamic and valid relationship structure.

Except, that’s not what happened.

A word of caution:

Don’t get me wrong, this show is far from perfect. It depicts brutal violence, sexual assault, slavery and plenty of bad haircuts. Also, pirates.

But this show is a queer landmark for its ability to bend and transcend gender roles and monogamous heterosexuality. If you’re looking for an honest, thoughtful exploration of sexuality, then watch Pirates next.