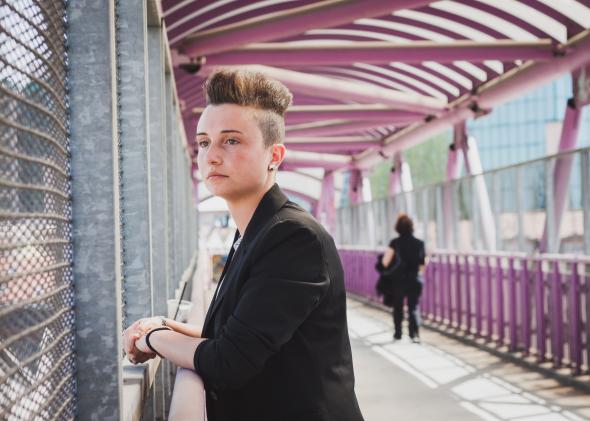 In my life, I know that my own “invisibility” invokes a bit of safety for me. I know that, since people don’t believe I’m a lesbian, the only homophobia I will experience is second-hand stuff that’s not exactly directed at me, but I catch it from the side. I know that I can feel safe blending in, not being something so spectacular as to draw attention to myself. Yes, I’m lucky.

But for those in the community who don’t blend in – who stand out – who are true to their nature, homophobia can still run rampant. The campy men who are chastised for it by straight men and other gay men alike. The butch lesbians who somehow embody the stereotypes of all lesbians, but who are becoming a rare creature. The trans people who don’t quite “pass” and want nothing more than to be accepted as they are.

These people who don’t blend in, or for the ones who can’t, they deserve respect. They often put up with more than I could imagine, and this year alone has shown so much hate killing – and for what? If you’re a member of the invisible community, I think it’s time we acknowledge the battles of those who are highly visible, too.

What are some of the things that happen when you don’t fit into a binary gender?

Those who don’t fit into the binary genders but choose to go along with the “perception” of which restroom they should use face danger as well. Since many non-binary people are hard to pinpoint exactly, the assumption by the homophobic may be to assume that they belong somewhere else, no matter which side of the spectrum they fall on. It’s not the case everywhere, thankfully, but it is a risk that must be assessed.

I have never once been misgendered (well, except on the internet), and I am thankful for this. I couldn’t fathom how much pain it must cause for someone to misgender you, particularly in a situation when you’re just trying to do what you need to do. Non-binary people who deal with this on a daily basis, I lift my hat to you. You are stronger than I.

Projections and assumptions about your “exact” gender definition may happen, on a regular basis, with complete strangers. Highly feminine women may feel threatened by you. Highly masculine men may feel taunted by you. Or it might be the opposite. Either way, your sexuality is perceived on full display, and people invite themselves to make speculations about you – without even knowing you. I respect your strength in dealing with these people.

Butch women have reported that it feels like their gender identity is on trial – and I’m sure there are trans individuals who feel exactly the same way. It is not our responsibility to validate them, and it is not our right. You don’t get to decide who or what someone is, under any circumstances. Ladies and gentlemen who put up with this discrimination, you are valid, and you mean so much for not waiting for their acceptance.

To the women who watch how they act in the public restrooms in order to keep from making anyone else uncomfortable; To the transmen who wait until the bathroom is empty so no one sees you’re using a stall; To the butch women who avoid eye contact while waiting in line… I respect your struggle. You shouldn’t have to keep yourself in line with their expectations, but you do. You are strong and you are polite – even when the world doesn’t want you to be.

This article was inspired by Butch Please: Butch in the Bathroom, which brought light to many of the daily struggles faced by those who don’t fit into the binary gender. All credit for the idea goes to Kate, and I greatly appreciate the opportunity to see into your experience.

I have always held a fondness for those who existed somewhere in the middle of the spectrum, and her narrative inspired a new, greater respect. If you’ve got the time, please go read it – whether you fall within the binary or not.