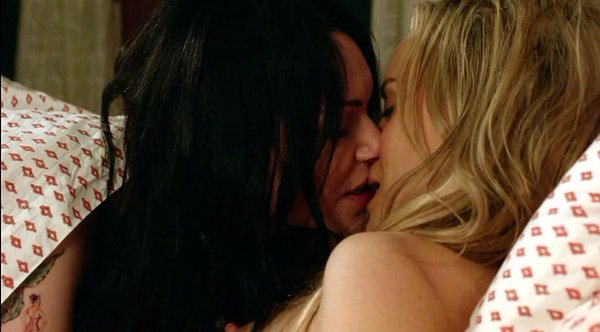 Sometimes sex is awkward. I get that. I think I’ve probably had more awkward sex than I’ve had “normal” sex – it’s almost as if awkward is normal.

But that doesn’t mean you have to feel awkward when you’re having sex with someone, even if it’s someone new. Awkwardness is mostly in our head, after all – and those who have a little more awkwardness overall (hello, me) are bound to have more awkwardness than most others.

Ready to start getting rid of some of the weirdness?

Remember she’s there because she wants to have sex with you.

In almost any scenario where you’re feeling awkward about what’s about to happen, it can be helpful to remember that this woman already wants to have sex with you. Through all your awkwardness, she still thought you were worth sleeping with. This should be hugely reassuring.

If you haven’t actually discussed the idea of having sex yet (but you’re planning to put it into motion), it’s best if you take a look at her overall cues. Is she acting like she wants to have sex with you? If she’s not, then it’s not awkwardness you’re feeling – it’s unrequited sexual tension.

Remember everyone has a first time.

If it’s going to be your first time (or if you’re still pretty inexperienced – whether only with women, or altogether), it’s important to realize that no one starts out a pro. No matter how many lesbians like to claim that their talent was all-natural, it’s actually a proven fact that talent is learned – not automatically acquired. No one is impressive their first time unless they have a super great teacher.

Before I get anyone saying that they really were amazing from the start, let me clarify: There are some people who start off at a better “square one” than others, but sex is still a learning experience. There is always room for improvement, even for those who are incredible. “Perfect” doesn’t exist, so stop worrying about whether you are – no one is.

I don’t know about you, but I tend to be overly critical of myself when I see myself naked. The problem with this is that I am really turned on by the idea of watching my partner pleasure me, and sometimes even recording a little video. (For personal use only, of course.) I see how I look in all these unflattering angles, and I obsess over every little thing that could be better – and the arousal has to fight through self-consciousness before I can actually relax and enjoy myself.

Friends, remember: The women who want to sleep with you find you attractive. You shouldn’t have to worry about whether or not you feel sexy. The angles we see ourselves at look much different than the angles that she sees – whether she’s looking up from your vagina or she’s lying next to your side. Don’t worry so much about what she thinks of you – if you’re in this situation, the way she feels should be obvious by now.

Remember a sense of humor is very attractive.

If you can make jokes during sex, it might help lighten the tension. I’m a firm believer that, if you can’t laugh during sex, you’re having sex with the wrong person. As an added bonus, it actually helps to start releasing endorphins (the “happy” chemical in your brain, that’s also released when you have an orgasm) – which means that having a sense of humor about your sex life might actually make the sex better, too.

One caveat, though – it’s important that your humor and jokes are tasteful. For example, joking about having a “side chick” when your partner of four years is going down on you is probably not a good joke, nor is joking about having an STD. But joking about the noises your vagina makes during sex? Totally helps alleviate the awkwardness.

I think the most important thing to remember is that awkward sex doesn’t mean you fail at everything else. In fact, it usually doesn’t even mean you fail at sex. No one’s going to hit it out of the park every time – you’ve got to leave yourself a little room to make mistakes.

I think my generation is really guilty of this (but not universally). We put too much pressure on ourselves to make sure the sex is on point – which doesn’t leave us any room to mess up. The truth is, in most cases, less-than-perfect sex isn’t a deal breaker – so don’t worry so much!