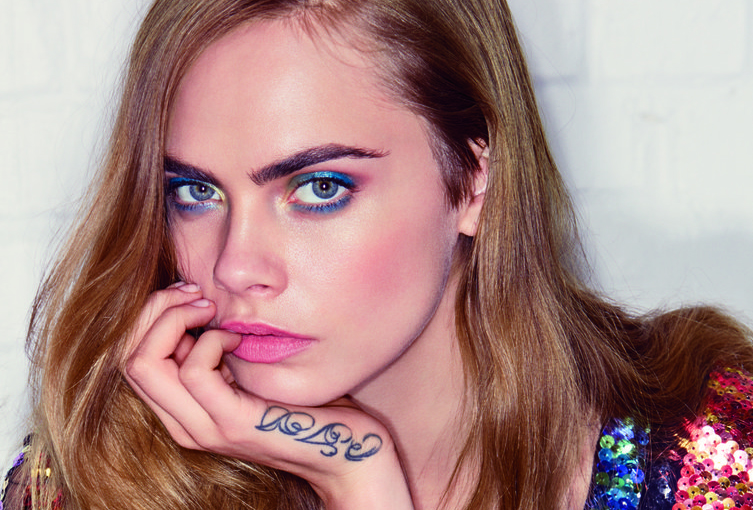 Cara Delevingne is the ‘it’ girl of our time. She appears in ad campaigns, music videos, and movies. The tabloid’s love her, we love her and fans love her. And the fact that she’s in a relationship with a woman and proud of it has been the least focused-on part of her career thus far.

In the July issue of Vogue, the 22-year-old speaks candidly about her sexuality and how she’s in lover with her girlfriend St Vincent (aka Annie Clark).

I think that being in love with my girlfriend is a big part of why I’m feeling so happy with who I am these days. And for those words to come out of my mouth is actually a miracle.”

We couldn’t be happier for her, especially considering the long road, which led to this moment in her life.

When first coming to terms with her sexuality, she revealed:

It took me a long time to accept the idea, until I first fell in love with a girl at 20 and recognized that I had to accept it. But I have erotic dreams only about men. I had one two nights ago where I went up to a guy in the back of a VW minivan, with a bunch of his friends around him, and pretty much jumped him … The thing is, if I ever found a guy I could fall in love with, I’d want to marry him and have his children. And that scares me to death because I think I’m a whole bunch of crazy, and I always worry that a guy will walk away once he really, truly knows me.”

Cara doesn’t just open up about her love life though, as she also confesses about issues with partying, modelling, and struggle with depression.

On the difference between modeling and acting:

The thrill of acting is making a character real. Modeling is the opposite of real. It’s being fake in front of the camera.”

On wanting to leave the modeling world:

I’m not sure I understand what fashion is anymore. I admit I was terrified to leave. I mean, the bubble gives you a kind of dysfunctional family. When you’re in it, you get it. And the second you’re out of it, you’re like, What the hell just happened?”

On her mom’s struggle with heroine addiction:

It shapes the childhood of every kid whose parent has an addiction. You grow up too quickly because you’re parenting your parents. My mother’s an amazingly strong person with a huge heart, and I adore her. But it’s not something you get better from, I don’t think. I know there are people who have stopped and are fine now, but not in my circumstance. She’s still struggling.”

On suffering from depression as a teen:

This is something I haven’t been open about, but it’s a huge part of who I am. All of a sudden I was hit with a massive wave of depression and anxiety and self-hatred, where the feelings were so painful that I would slam my head against a tree to try to knock myself out. I never cut, but I’d scratch myself to the point of bleeding. I just wanted to dematerialize and have someone sweep me away.”

And she continued, sharing:

I smoked a lot of pot as a teenager, but I was completely mental with or without drugs. I thought that if I wanted to act, I’d need to finish school, but I got so I couldn’t wake up in the morning. The worst thing was that I knew I was a lucky girl, and the fact that you would rather be dead . . . you just feel so guilty for those feelings, and it’s this vicious circle. Like, how dare I feel that way? So you just attack yourself some more.”

Which lead to her low point. Cara explained:

Full-on bubble. I was packing my bags, and suddenly I just wanted to end it. I had a way, and it was right there in front of me. And I was like, I need to decide whether I love myself as much as I love the idea of death.” And then a song started playing on her laptop, Outkast’s SpottieOttieDopaliscious, which had been played at the funeral of a friend who had recently died of a heroin overdose. “It felt like a warning from him. And it made me so furious with myself.”

No one can ever say she’s had it easy. She’s gone through so much, but at least has the support of so many good friends.