Joint Chiefs To Troops: No Change To Military’s Policy On Transgender Service Members 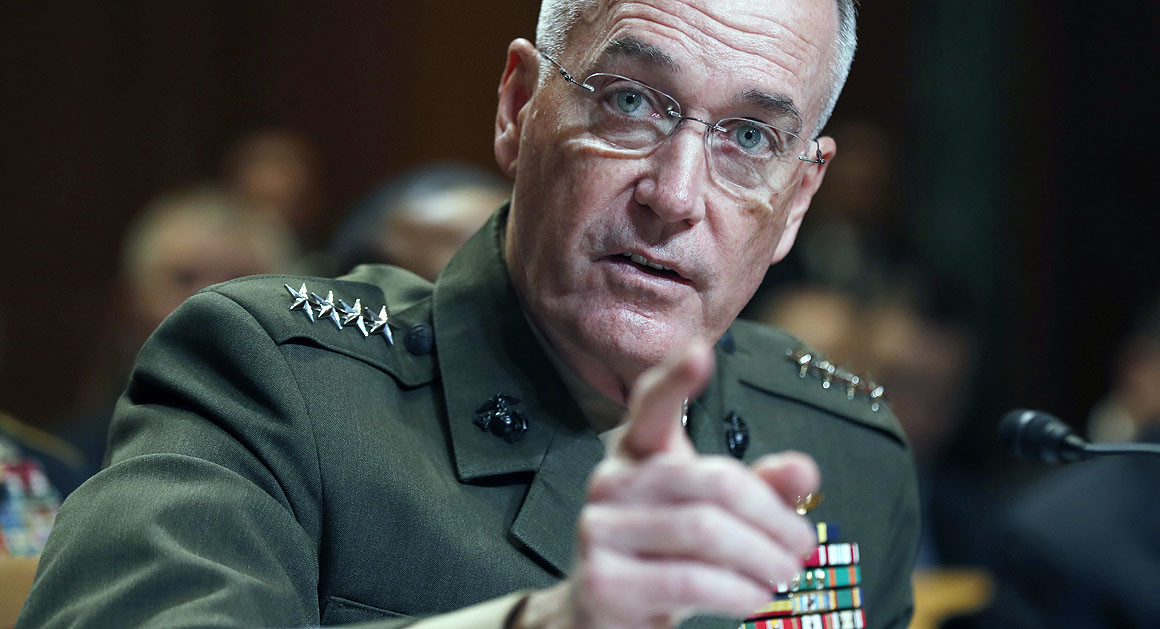 Gen. Joseph Dunford, the Chairman of the Joint Chiefs of Staff, announced today that despite Donald Trump’s tweet to the contrary there has been no change yet to the military’s policy regarding transgender personnel.

In the message, which was sent to the chiefs of the military branches and senior enlisted leaders, Dunford said that the military will continue to “treat all of our personnel with respect.”

I know there are questions about yesterday’s announcement on the transgender policy by the President. There will be no modifications to the current policy until the President’s direction has been received by the Secretary of Defense and the Secretary has issued implementation guidance.”

In the meantime, we will continue to treat all of our personnel with respect. As importantly, given the current fight and the challenges we face, we will all remain focused on accomplishing our assigned missions.”

About 15,000 transgender troops are currently serving openly in the United States military. In June of 2016, then-Secretary of Defense Ash Carter announced that already-serving transgender troops could come out without fear of discharge. He also established a plan to let openly transgender people enroll in the military within one year.

On Wednesday morning, however, Trump declared on Twitter that “the United States Government will not accept or allow” transgender individuals “to serve in any capacity in the U.S. Military.” Trump’s proclamation raised the real possibility that the thousands of transgender troops in uniform might be purged.

But Trump made his announcement without consulting the Pentagon. He reportedly did not even discuss the issue with his Secretary of Defense, James Mattis, who has strongly supported open transgender service in the past. Trump’s sudden decision threatened to jettison years of careful planning and preparation on the part of the military.

It also left military leaders in a lurch, caught between the president’s tweets and formal policy. The Navy has clarified that, at least for now, transgender troops may still serve and receive transition-related medical care; Dunford’s letter makes clear that remains official policy in every branch of the armed forces.

The President’s tweet this morning regarding transgender Americans in the military is yet another example of why major policy announcements should not be made via Twitter.

The statement was unclear. The Department of Defense has already decided to allow currently-serving transgender individuals to stay in the military, and many are serving honorably today. Any American who meets current medical and readiness standards should be allowed to continue serving. There is no reason to force service members who are able to fight, train, and deploy to leave the military—regardless of their gender identity. We should all be guided by the principle that any American who wants to serve our country and is able to meet the standards should have the opportunity to do so—and should be treated as the patriots they are.

The Department of Defense is currently conducting a study on the medical obligations it would incur, the impact on military readiness, and related questions associated with the accession of transgender individuals who are not currently serving in uniform and wish to join the military. I do not believe that any new policy decision is appropriate until that study is complete and thoroughly reviewed by the Secretary of Defense, our military leadership, and the Congress.

The Senate Armed Services Committee will continue to follow closely and conduct oversight on the issue of transgender individuals serving in the military.

PrevPreviousTrump, With A Single Tweet, Bans Transgender People From Serving In The US Military
NextAnn Coulter Says She’d Rather Blame Hurricane Harvey On Lesbian Mayor Than Climate ChangeNext