A Chat with Caryn Hayes, Writer / Director who Doesn’t like Labels 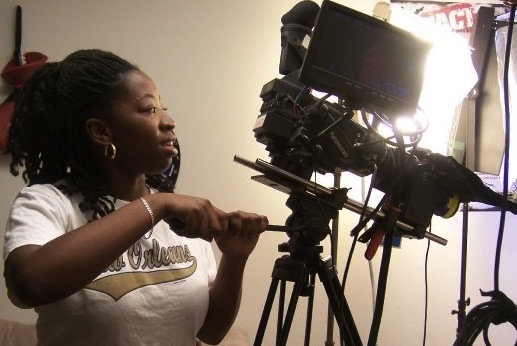 Tom Sykes: You have recently released your short film ‘Clean Hands’, which is about a lesbian couple caring for a terminally ill man. Where did the idea for that come from?

Caryn Hayes: I wanted to do a story about a couple who don’t believe in the same things; one partner is pretty religious and the other is not. I was just fascinated by this kind of relationship and the script just kind of ballooned from there. On a storytelling level I thought it would be pretty gripping for an audience.

TS: Does the film explicitly deal with LGBT issues or are you just trying to tell a story? Could you substitute the lesbian couple for a straight couple or any other kind of couple and still tell the same story?

CH: I wanted to write something that anyone could relate to, but at the same time it is important for me to tell lesbian stories. Beyond that, the main characters could have been a gay or a hetero couple and the film would still work, I think.

TS: It was premiered at the 2014 Pan African Film Festival. Is there a kind of ethos behind that festival?

CH: It’s about promoting movies by directors from Africa itself and also from the African diaspora all over the world. It was held in Los Angeles.

TS: On Kitschmix we’ve reported on the growing problem of homophobia in Africa. Did you experience any hostility at this festival or at any other point in your career?

CH: I think that there’s a quite a bit of homophobia in every community including in the African diaspora. With Clean Hands we haven’t encountered any, at least not so far. It hasn’t been released worldwide yet. At the Pan African Film Festival people just really wanted to watch the movie, nobody wanted to come see it just so they could criticise or bash it. So the response has been pretty positive so far.

TS: Before this film you had made some very successful web series – The World of Cory and Sid and Breaking Point. To what extent does Clean Hands build on that work, or has evolved from it? Are there similar themes in those series that you’ve revisited in your latest offering?

CH: Clean Hands is very different to what I’ve done previously. My most recent series, The World of Cory and Sid, is a dramedy about relationship break-ups amongst roommates and the awkwardness that goes with that. Breaking Point is like a soap opera, a light drama, where there are murders the characters get away with. The only similarity with Clean Hands is that both works have a parent who is not accepting of her daughter’s bisexuality. But then again I wouldn’t say Clean Hands really builds on previous work because we don’t spend so much time on the mother-daughter relationship in the new movie. With Clean Hands I wanted to create a heavier, more serious kind of drama.

TS: Do you prefer writing that heavier dramatic stuff to writing comedy?

CH: It really depends on my mood. In general, I prefer dramedy because I can go wherever I need to go, but in the future I want to do more drama that’s rooted in real-life experience.

TS: How does the process of writing a short story differ from that of a screenplay?

CH: I approach them in the same way. The difference is that you have to do more describing and explaining in fiction whereas you spend more time on dialogue in a screenplay or teleplay. I started writing fiction when I was young and then later on I fell in love with the idea of writing for the screen. Then again, I do want to complete at least one novel and one day I’ll take a vacation and get it completed!

TS: Do you have a routine you follow when you write?

CH: I write best in the mornings. When a deadline’s coming I set my alarm to go off three or four hours before I need to wake up. I have a little playlist, so whatever I’m writing I try and match the mood with the music. If I’m working on something dramatic then I put on film scores, that kind of thing.

TS: What kind of artists do you listen to when you’re writing comedy?

CH: It would depend on what comedy it is. If it’s an “angry chick movie” kinda thing – because I’ve written a couple of those already – it’d be someone like Pink as I find her lyrics just so funny. ‘Like So What’ is a great song. It tends to be more poppy stuff when I’m doing comedy.

TS: You’ve been described as a ‘shining example’ of a lesbian who has made it in Hollywood. How was the journey?

CH: I don’t like labels, but with that said it’s true that I’m a lesbian and an African-American. I wouldn’t have said that the journey was more or less difficult because of my sexuality. It’s difficult for everyone. Being a black lesbian didn’t make it harder of course, but it didn’t make it easier either.

The journey’s been long because I’ve been on it for a long time and I’ve been creating my own content for 5 or 6 years now. That may not seem like such a long time comparatively because it takes other people a lot longer!