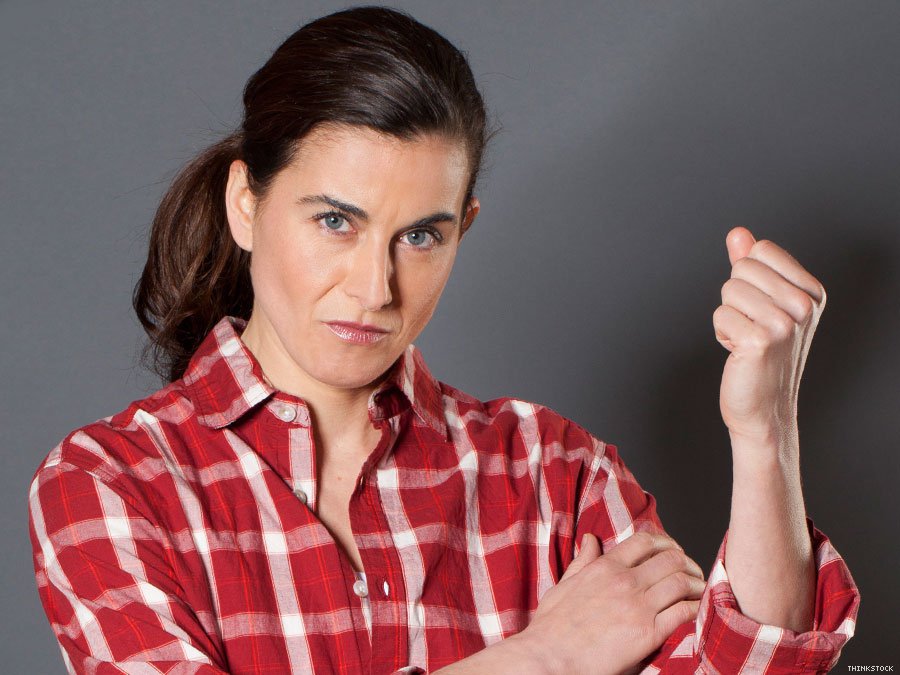 Over the ten years since I came out of the closet (and for a few years before then), I think I’ve heard pretty much every lesbian stereotype out there. Between the crazy idea that we all play softball (well, I did for exactly one season – wasn’t for me), the audacious notion that we all hate men (I’m still learning how to have female friends, actually), and even the seemingly-harmless idea that you can predict someone else’s sexuality before they officially come out to you…

Just like any other stereotypes, though, just because you’ve heard it, and even seen it confirmed once or twice, does not mean that it applies to everyone. Here are some of the most ridiculous lesbian stereotypes I know. How many did you believe?

Myth: Being a lesbian is really all about men.

For some reason, most people assume that lesbians are lesbians because of a man, or that the right man would magically “fix” their lesbianism. While these types of comments are usually delivered with noble intentions, they miss the mark – by a long shot.

“Lesbians are victims of physical or sexual abuse by a man.”

While this one is sometimes true, it’s important to note that women are statistically at-risk for physical and sexual abuse by a partner or family member, regardless of the way they identify. It’s also not possible to consciously change your sexual identity – otherwise, there would be a lot more lesbians out there. (I’m joking, of course.)

Again, I can’t really speak for everyone here, but I’ve never been a man-hater. I’ve never been a person-hater. In fact, I have a really hard time hating anything – and I know I’m not alone. That being said, literally every lesbian I personally know has men in her life who she cares deeply about. (She just doesn’t want to have sex with those men.)

“There has to be a butch and a femme, because you need a man and a woman.”

For starters, the idea that butch women are men or want to be men or seek to act like men is completely unfounded. In fact, I think the terminology you’re looking for is “trans man”, not “butch lesbian”. It’s also scientifically proven that there aren’t really any major differences between men and women, besides biological and social.

“You just haven’t been with the right guy yet.”

This one is usually considered the most offensive of the male-based stereotypes, because it implies that “the right guy” could magically “fix” the dreaded lesbianism. You see how that might be taken just a little bit negatively? Many women thoroughly experiment with their sexuality before definitively coming out, and your arbitrary decision that her identity is wrong is deplorable.

Despite the fact that there are no absolutes when it comes to sex toys (or sexual identities), people still feel the need to guess at the sex lives of others. There are assumptions made about a deeply personal matter – what goes on in the privacy of one’s bedroom – and often, those assumptions are way off.

“If she was really a lesbian, she wouldn’t use sex toys.”

Admittedly, I believed this one for a long time. I resented any lesbians I knew who used any sort of toy. I felt that, somehow, it meant she was “less gay”. And then… I tried sex with sex toys. Let me tell you… My experience using sex toys with women is vastly different than my experience sleeping with men was. Amazingly enough, your attraction to the person doing things to you means a hell of a lot more than what they’re using to stimulate you.

“It doesn’t count as real sex unless…”

No, stop right there. “What counts as sex” is a deeply personal decision, but most women agree that sex is a lot more than just penetration, or just orgasms, or just any one particular thing. In the grand scheme of things, no one’s “sex” should be limited to one particular activity. Can you imagine how boring that must be after a couple of months?

And, on that note, there’s this big thing about lesbians having boring sex lives. Or, if it’s not that one, it’ll be the idea that lesbians stop talking to their friends because they’re too busy having sex 24/7. But, for me personally, this has never been the case. Sure, we go through ebbs and flows – but doesn’t everyone?

“Lesbian bed death is unavoidable and usually means the end of the relationship.”

Well, in any long-term relationship, things are bound to get stale from time to time. That doesn’t mean you’re not attracted to each other anymore, either – it just means that, at that point in your relationship, there are more important things to worry about. Usually, this comes and goes – just like in any other long-term relationship. I’m not really sure why people think that all lesbians (and only lesbians) face this, or why it’s seen as such a big deal.

I’m not even sure exactly where to start with this one. Most women who identify as lesbians have no real interest in having a sexual relationship with a man, and a lot of lesbians won’t even have sex with bisexual women in the first place. Plus, what makes you think we’re not monogamous? Sure, some of us aren’t… But that doesn’t mean that none of us are committed to our partners.

“I bet you guys have sex like, all the time.”

For some of us, that might be true. I’ve been with women whose sex drives were totally through the roof. For a brief period of time during my young-adult life, I was pretty sex-crazed, too. But, just like with straight women, we’re not always in the mood. (Although, science has shown that lesbians have more orgasms.)

“All lesbians are amazing in bed.”

I think this one started off from within the lesbian community – and, quite frankly, I’ve been with a few women who proved that sexual prowess is not universal. What’s more than that is that, for the large majority of us, sex isn’t really that big of a deal. It’s nice, but it’s not everything we are.

Myth: You can tell someone is a lesbian just by looking at her.

Every single time I hear someone say, “But you don’t look like a lesbian!” or “You’re too pretty to be a lesbian!” I have the overwhelming urge to do a table-flip. Then again, I’m one of those lesbians who gets that from lesbians, straight men, straight women, and bisexuals of all varieties. Definitely one of the most irritating stereotypes out there, and it doesn’t seem like it’s ever going to change.

“Lesbians hate shaving and wearing makeup. They’re into sports and they dress like men.”

Just because a woman wears less “feminine” clothing or participates in more “masculine” activities doesn’t mean she’s a lesbian. We wish it was that simple, but thankfully, that means that lesbians are a gorgeous, diverse, and super vast group – we don’t have to fit into one particular fashion bracket to know who we are.

As a lesbian who likes rocking heels just as much as I enjoy a good pair of sneakers, I don’t think your shoes are an accurate predictor of your sexuality. Besides, it was a straight girl who showed me my first pair of Vans – and she wears hers a lot more than I wear mine. And, by the way, you’re not allowed to decide that someone else’s sexuality is fake – you have no idea what’s going on in her head, her heart, or her bedroom. Gaydar is a crap shoot at best, guys.

Most people know about lesbians through The L Word and pornography, and – because they don’t have much to compare to – they get this idea that all lesbians are really like that. Then, when they meet a lesbian who isn’t like the picture they’ve built up in their minds, they reject the alternate possibility. That is why we’re pushing for more lesbians on TV – not because we’re trying to take over.

“Lesbian life must be just like The L Word/Orange is the New Black/insert any other television show or movie with a lesbian character here.”

For the most part, the representation that gets the biggest audience is the one that gets renewed – and really, most lesbians are no more exciting than your average straight person. We watch TV shows when it’s hard to look away – after all, everyone likes a train wreck. That doesn’t mean we all sleep with each other and steal each other’s babies.

Myth: Lesbians can fit into one specific box.

Okay, so I went all super-general and went with the most basic stereotype of all: All ___ are ____. But, seriously… How do people still believe these things?

Do you really mean psycho? Because I don’t think that word means what you think it means. While we’re at it, are you sure stalking is what you think it is? I mean, don’t get me wrong… Stalking is terrible. But it’s not “a lesbian thing”. Stalkers have a little more to do with mental illness than your sexual orientation.

Fun fact: Coming out is hard. Like, really hard. I’ll go ahead and indulge the idea that some lesbians are confused – but I don’t think most of us are going to go through the trouble of coming out if we’re not sure about it.

“Lesbians are rude (especially towards men).”

Ugh. For my own personal sanity, I’ve got to believe that most lesbians (and everyone else on the planet) is a nice person. I know there are exceptions, and I can handle that. But shitty people are shitty people – they’re not that way because of their sexual orientation (and their attitude has a chance to change eventually).