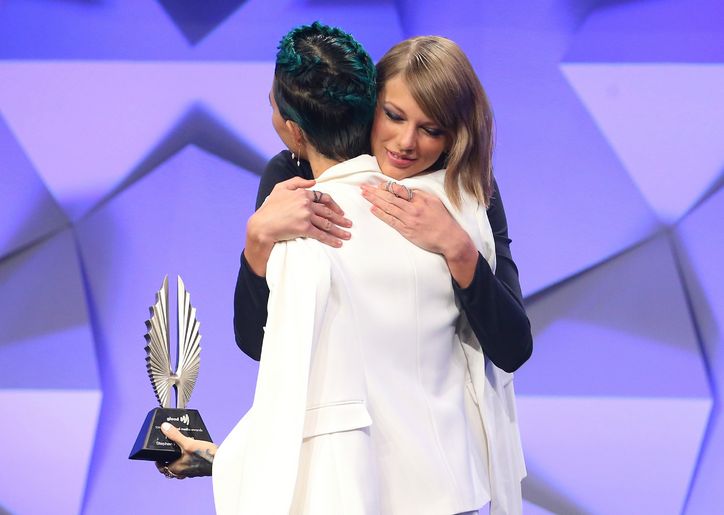 Actor, advocate and Australian hotty Ruby Rose has become the latest in a long and inspiring list to pick up GLAAD’s Stephen F. Kolzak Award, which was presented to her by Taylor Swift.

Tonight was EVERYTHING… Thank you @taylorswift thank you @glaad thank you to everyone who came out to be part of an amazing night. I feel truly blessed and humbled. I'm going to go cry and hold my pillow like a teddy now because I feel like I'm dreaming.

The Orange Is The New Black champion was honoured for

Queen Latifah also won an award for her role in Bessie and thanked lesbian aunt who raised her.

On Saturday, Lady Gaga was spotted rocking denim cut-offs and a fishnet bikini top while partying it up at the Club Skirts Dinah Shore Weekend music festival.

The singer was seen dancing with a group of friends (including Kate Moennig aka The L word’s Shane) and was on hand to watch Samantha Ronson’s DJ set.

It’s been reported that Cara Delevingne and St Vincent moved into a new love palace in Paris, as rumours also build that they will marry soon. (Awwww)

US soccer star, Abby Wambach, was arrested over the weekend for not stopping at a red light and failing a sobriety test. According to her Facebook post, the incident happened in Portland, Oregon, after dinner at a friend’s house.

Those that know me, know that I have always demanded excellence from myself. I have let myself and others down,’ she wrote. ‘I take full responsibility for my actions. This is all on me. I promise that I will do whatever it takes to ensure that my horrible mistake is never repeated.”

University of San Francisco coach and former Stanford and U.S. star Jennifer Azzi has come out as gay, announcing she is married to her top assistant, Blair Hardiek.