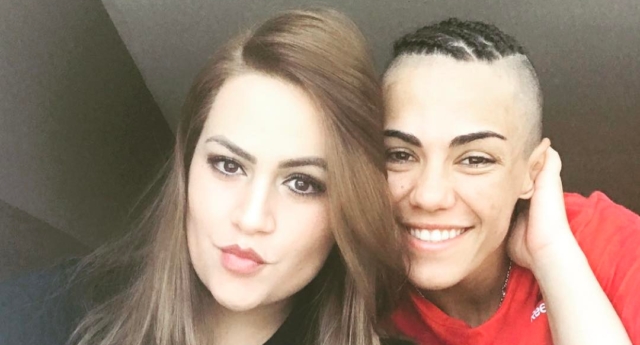 What’s the best way to cap off a world championship fight? Proposing to your girlfriend, of course.

And once she had discussed the fight with the in-cage interviewer, Andrade showed further courage to take the ultimate leap.

Fans in the crowd started cheering as she made the proposal to her girlfriend Fernanda in Portuguese, before it was translated into English. (Out Sports)

Today, I’d like to make a special request to my girlfriend, Fernanda, who is here. I want to ask her for marriage.”

Watch the full proposal below:

Pretty Little Liars star Shay Mitchell has said that playing a lesbian character on the hit show was “the best”. Talking to HuffPost, Mitchell opened up about what it was like to play a queer character and what it has meant to her.

That’s the best part. That was definitely the best part out of everything. I’ve had guys and girls come up to me and say, ‘Thanks to your character, I came out to my friends and family’.”

That means more to me than anything. The fact that I got to play this character that I had so much fun with and we got to be on an entertaining show that’s one thing, but to have a small impact on people’s lives in that way… Words can’t explain. That’s just awesome.”

May is Mental Health Awareness Month, and Tegan and Sara are joing forces with VICE and Instagram to discuss challenges queer people face in dealing with mental health issues. (VICE)

Together with the Trevor Project, Julia Kaye (creator of UP and OUT, a webcomic where she’s been documenting her gender transition), and Instagram public policy representative Carolyn Merrell, they’ll be discussing how each are using social media to combat stigma surrounding mental health issues, and how we can empower both physical and online communities to deal with them.

Trans whistleblower Chelsea Manning has revealed a new photo of herself after being released from prison yesterday.

In one of his final acts as President, Barack Obama commuted the sentence of Pvt Chelsea Manning, who had been imprisoned in Fort Leavenworth military prison after leaking classified government documents concerning alleged war crimes and rights abuses via WikiLeaks.