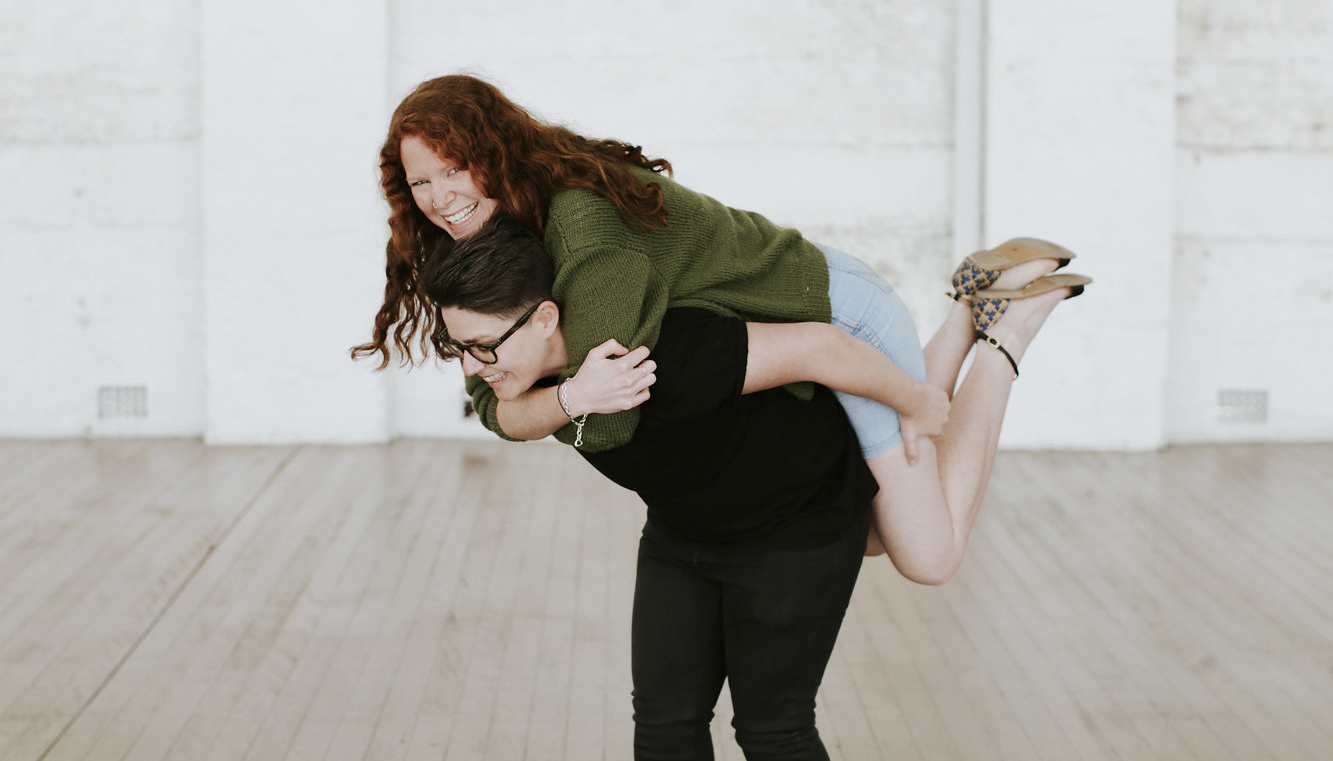 Our story began with Brenda, a lesbian dating app that was all the rage in Sydney in 2013. Although this app was rather sparse in terms of the details you input about yourself, Dylan’s cute picture and short description was quick to spark my interest and I sent them a message.

Thankfully they wrote back. Whilst Chatting like this wasn’t unusual for me, what I didn’t know was that it was Dylan’s first time on a dating site and despite enjoying our conversation they were totally weirded out at the thought of chatting so in depth with someone they didn’t know. So much so that they almost didn’t meet me.

Almost. Obviously we did meet and we had a long first date that neither of us wanted to end, then an extremely romantic second date (night time beach picnic with candles- well done Dylan!) and many many more dates to come. We were a lesbian dating app success story!

Fast forward 3.5 years and we are still a success story, only not the lesbian type anymore, and I guess if we’re being pedantic we never were.

In 2015, Dylan came out as gender neutral, a gender that sits outside the constraints of the male/female binary, and has only just started to be legally recognised in Australia in the last couple of years. Although this revelation didn’t change the way we felt about each other, or the way we related to each other, it did change both of our identities and so caused a lot of confusion for me, especially because the journey was in no way linear.

The revelations started coming for Dylan after I jokingly asked them one day if maybe they might be transgender and be a man. Dylan laughed it off, but unbeknownst to me stayed up late for days on end feverishly googling all things trans and noticing many similarities, as well as differences. This eventually culminated in Dylan telling me that they were a man, and us both crying at the enormity of the situation for a whole weekend. And then suddenly, not to long after this, Dylan changed their mind.

To be fair, it wasn’t sudden for Dylan because they already knew that there were some parts that didn’t add up and that ‘male’ didn’t really fit, but to me, sitting outside of the process and hearing only the end results, it was sudden.

So life went on as usual in our female, lesbian world and then it was happening again. Obviously Dylan had been thinking about this constantly and taking time to consider all possibilities, but again, to me it was a sudden revelation. ‘I am not a man, but one day I want to have a flat male-like chest and then I will feel comfortable.’ It quickly moved from one day on to in a few years and then next year.
I wasn’t shocked that this was something Dylan wanted but I was confused about what this all meant and where it was going. Was it going to be a slow transformation into ‘male’ or just a cosmetic change that made Dylan feel more comfortable in their body?

I didn’t know, but I wanted to know desperately. I realise now that these types of self discovery take time and can be very emotionally draining, but for me, watching from the outside and never knowing what was happening and what to expect also had its challenges. I loved Dylan but I was unsure how I felt about the possibility of being ‘straight’ and dating a man, and basically just wanted to know where the end point of this journey would be so that I could get my own thoughts straight.

After more soul searching Dylan realised that neither male nor female fit for them, and found the right label- gender neutral, or non-binary or genderqueer. We happily interchange these words, although some people probably have a preference for which is right for them. Even after this discovery there were still more revelations to come with Dylan making the decision to change their name and their pronoun (their old name is generally considered a ‘female only’ name so didn’t quite fit).

Writing it all down it sounds fairly condensed, but from the moment I mentioned the possibility of Dylan being transgender, to the point where the first changes were actually made was 18 months, and we are still waiting on Dylan’s chest surgery due to the availability of the surgeon, so it will end up being about a 2 year process in the end. The first 18 months were definitely the hardest part though. Hard for Dylan as they analysed every innermost thought to find their authentic self, and hard for me as I waited on (and at times tried to provoke) these decisions, anxiously wondering what my relationship would look like, and how my own identity would change in Dylan’s reflection.

I’m not going to lie, it was a difficult and challenging time for both of us, and whilst I know for a fact that neither of us ever thought specifically about leaving each other, we both thought the other one might leave. Dylan thought I would jump ship because I wanted a woman and I thought Dylan would run from me because I wasn’t laughing and smiling my way through the situation. Thankfully this didn’t happen.

Finding my voice and starting to write about our relationship and my experiences on my blog She+They was a major turning point for both of us. It gave me the confidence to confront the situation head on and really own my feelings and experiences – both the negative and the positive – and it explained to Dylan exactly why I had found this change hard. It gave me a platform from which to discuss identity, change, relationships, and all things gender neutral and also gave me a new ‘hobby’ with a purpose. I wanted to provide myself with an emotional outlet, educate my community and reach out to other partners of transgender people. I’d like to think that the blog is quietly achieving this.

I know it sounds a bit corny to say this but we are stronger and happier than we have ever been now, and it’s undeniably related to Dylan’s transition. Obviously Dylan is a happier human so this has helped, but the transition also taught us a lot about each other and the different ways we both like to communicate. We learnt that I express my love through tasks whilst Dylan expresses theirs through words, that I like to talk everything through and be a part of ‘the process’ where Dylan prefers to do this alone and then divulge answers and that I like to move quickly, investigate all angles and make decisions where Dylan prefers to ruminate. Neither of us are ‘right’ but understanding the inner workings of each other, and what we both need in times of stress has brought us closer together. We also now know each other’s trigger points, as well as solutions to appease each other, so that basically any argument we may have now dissolves in a matter of minutes.

Obviously Dylan’s journey was not easy for them, and caused great amounts of confusion and fear about what the future may hold, but that said often the journey of a partner is seemingly overlooked completely. Perhaps this is because it is considered easier or insignificant by comparison.

Whatever the reason, it is something that shouldn’t be overlooked or devalued. As the partner of someone transitioning my sense of self and identity was challenged in a way that I never thought was possible.

I mean, I’m a lesbian in a relationship with someone that isn’t a woman, and in a world where everything has labels our relationship doesn’t even fit into a box. I always considered myself open minded so I guess it’s pretty great to be able to back myself up and say that I am quite literally living outside the box. And it’s a pretty damn good space to be in!