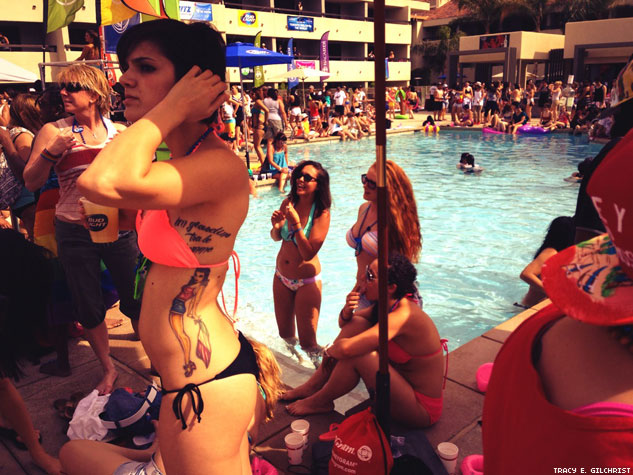 The L Word television franchise has a pretty long history with the Club Skirts Dinah Shore Weekend. In season one of the scripted show, The L Word, Alice, Jenny, Dana and Shane road-tripped their way to the event and got themselves into dramatic (and comedic) hijinks while the cast of the reality spin-off, The Real L Word, attended multiple times during its three seasons.

At Dinah Shore Weekend 2016, that history is set to continue as cast members from both The L Word and The Real L Word will be headed to Palm Springs next month.

Attending the event (which takes place between March 30 – April 3) will be Clementine Ford (who played Molly Kroll), Elizabeth Keener (who played Dawn Denbo), along with The Real L Word cast member Tracy Ryerson.

The three actors will be at the event as part of the tellofilms-sponsored Dinah Film Fest. All three have featured in tellofilm projects – Tracy Ryerson starred in the Kiss Me I’m Famous web series, and Clementine Ford and Elizabeth Keener will both star in the upcoming project Skirtchasers – and this should give fans of queer female media a chance to watch some great shows, shorts, films, and documentaries.

Moreover, fans will be treated to a special, ‘farewell’ performance from another set of The Real L Word cast members, Hunter Valentine.

The band’s music and personal lives featured heavily on the reality show and now, the pop/punk band (made up of Kiyomi McCloskey and Laura Petracca, along with touring members Leanne Bowes and Lisa Bianco) will perform their last show as they prepare to go on an indefinite hiatus.

Other big draws to this year’s Dinah Shore Weekend include a night of comedy and music from Orange Is The New Black’s Lea Delaria, DJing from both Samantha Ronson and Mary Mac, and a performance from Grammy-nominated artist Elle King.

To find out more about the Club Skirts Dinah Shore Weekend, visit the official website.