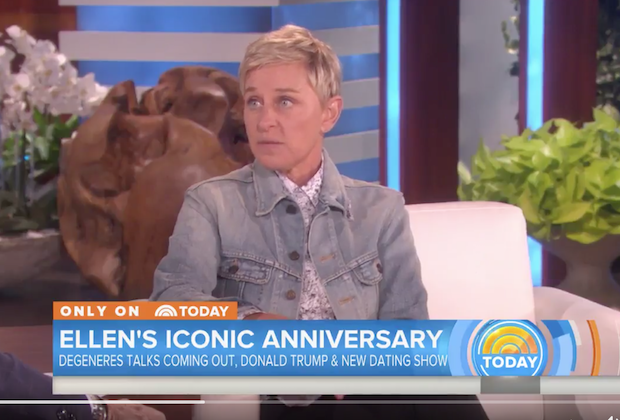 Ellen DeGeneres will not be inviting Donald Trump to her talk show.

The TV host shared her feelings about the current President of the United States with Today‘s Matt Lauer on Friday.

As for why she will not interview Trump: ‘Because I’m not going to change his mind.’

“He’s against everything that I stand for.” @TheEllenShow tells @MLauer why she doesn't want Trump on her show pic.twitter.com/8TvQARzT7n

DeGeneres came out as gay 20 years ago and is active in social causes including UNICEF, breast cancer and PETA.

She won a People’s Choice Award in 2016 for her humanitarian work.

We need to look at someone else who looks different than us and believes in something that we don’t believe in and still accept them and still let them have their rights.”

DeGeneres said she had met Trump in the early days of her Emmy-winning talk show as they filmed a bit with him as the host of Celebrity Apprentice. She even gave him baby gifts in an episode from 2006.

DeGeneres has had other notable political figures on her show in the past including President Barack Obama, Hillary Clinton, and Bernie Sanders.

In the interview with Today, DeGeneres also reflected on her ground-breaking, yet difficult, decision to come out of the closet.

There were death threats and that was negative. The biggest thing was I lost my career. For three years I could not work, was not offered one thing. I was running out of money, and I didn’t know if I was going to work again. And then I just thought I gotta do something about this. It taught me compassion. It taught me that I was strong enough to start all over again, and it was the greatest thing that ever happened to me.”