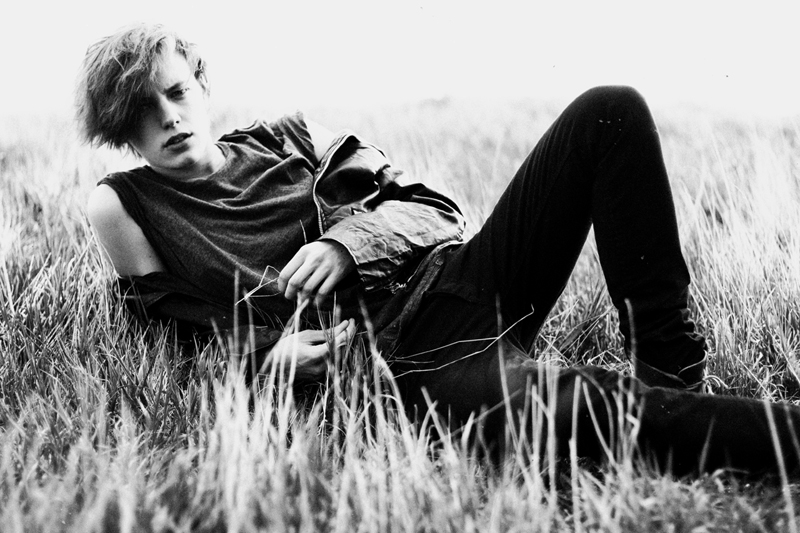 Former soccer player and self-described tomboy from Sweden, Erika Linder is famed for showcasing her androgyny in campaigns for Tom Ford, a Vogue Italia spread, and even a Katy Perry music video.

In fact, her first-ever photo shoot, she posed — convincingly — as a young Leonardo DiCaprio circa his Nineties film “The Basketball Diaries.” It was a gig that marked the start of a versatile career path.

Speaking with wwd.com the model recalled that period of time

Yeah. And back then, it wasn’t really happening as much. No one was really out there doing that. This guy hit me up who runs Candy magazine — Terry Richardson and Bruce Weber had shot for it — they shoot boys like girls and vice versa. This guy said, “I want to shoot you as young Leonardo DiCaprio from ‘The Basketball Diaries.’” The agency was like, “No, no, no.” They were weirded out about it. And I said, “But I would do that even if I wasn’t a model!” So I ended up doing it anyway. It was my first photo shoot.”

Back then she was 21, now she is 24-year-old and Los Angeles-based model, who lives with her girlfriend and their dog Butters.

In addition to modeling, Linder, who at times bears a subtle resemblance to model Daria Werbowy and at others the late River Phoenix, also acts, plays music and recently launched a namesake unisex apparel line.

I had wanted to launch a unisex line for like a year. My friend in L.A. was like, “I’ll run the business and you will be the face of it.” We came up with a few things like hoodies, beanies, snapbacks, baseball shirts — very plain stuff. I’m having fun with it. Things are still in production, but people have been ordering it from Australia, Hong Kong and Sweden.”

But she is not limited to just fashion, Linder has her eyes set on other things.

I wanna do movies, I wanna do music when I’m not shy about it….I love outdoor stuff. I want to go to Yellowstone. But for me, at the end of this whole crazy thing, I just want to get a house in Sweden somewhere in the countryside with my dogs. That’s it.