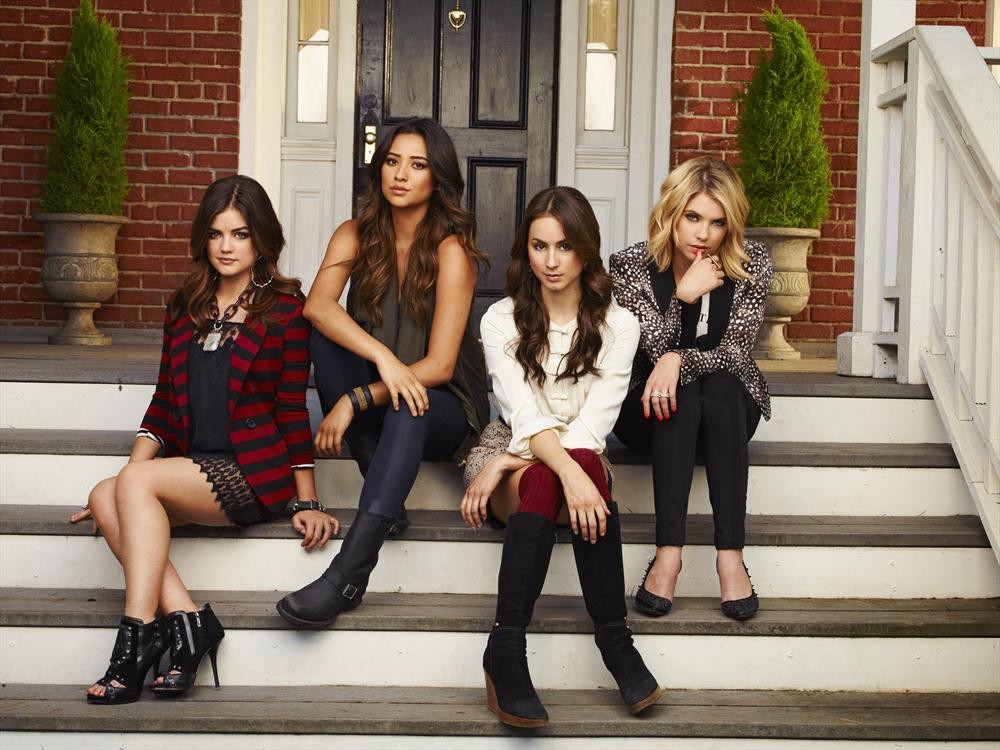 Wow, that Pretty Little Liars season 4 finale was a bit of a shocker wasn’t it? If you haven’t seen the episode and have no idea what happens in any of the surprising end of season scenes, then look away because this post is about to get spoilerific to the highest degree.

Right, now onwards for those of us who know just how PLL season 4 ended. Not only were Allison DiLaurentis’ (Sasha Pieterse) plans for safety scuppered by a gun, a goon and giant gap between buildings, but part time fan favourite and part time antagonist Ezra Fitz (Ian Harding) was also shot, leading to a dramatic scene on a rooftop where Aria (Lucy Hale) held her long-time love interest in her arms as he lay there with a bullet lodged in his gut. It’s unclear what will become of Mr. Fitz the seducer of teens (he was dated both Allison and Aria, after all) and teacher of English but he could hold the key to one of the show’s biggest mysteries – just who is A? If you remember, one of the last things ol’ Fitzy proclaimed at the end of last season was that he knew who the mysterious, hooded figure was. Interesting indeed.

This is info we could be privy to in the Pretty Little Liars season 5 premiere with S5’s first episode being PLL’s 100th overall and is being written by show runner Marlene King and directed by longstanding director, Norman Buckley, as a result. According to King herself, “There will be a big reveal: One of our mysteries that we’ve had for a long time on the show will be revealed in the 100th,” also saying that “We hope that it’s emotionally epic for us.” While it’s unclear just what that ‘emotional epic’ will entail, we do have some idea of who, if not what, will be on camera.

For a start, Hanna’s ex-boyfriend, Caleb (played by Tyler Blackburn), will make a return to the show after PLL’s supernatural spin-off, Ravenswood, was cancelled and he’ll be featured in the Pretty Little Liars season 5 premiere likely looking to shake things up between Hanna and her new mechanic love interest. Other Hanna related scenes include one between Hanna and Spencer that King tweeted she had written. In turn, Noel Kahn and Lucas Gottesman (played by Brant Daugherty and Brendan Robinson) will also make a return at some point in the season.

But a big question on everyone’s lips or at least those of LGBT viewers is just what will become of Emily Fields’ love life? The penultimate episode of Pretty Little Liars season 4 saw a dramatic scene between Emily and girlfriend Paige as Emily told her that she couldn’t trust her anymore as a result of Paige dobbing Allison’s ‘alive and well’ status in to the cops. It wasn’t completely clear if the couple are donezo (is anything on this show?) but we do know that a new love interest could be right around the corner for our teenage swimmer as she meets new character Sydney Driscoll (played by Chloe Bridges) who is both a newcomer to the show and to the Rosewood swim team, with the two girls reportedly becoming friends. Or maybe we’ll see the feelings between Emily and her first love, Allison rekindled as these four separate photos from Norman Buckley’s Twitter seem to suggest that Allison will be featured heavily in the show’s season premiere.

While it all seems very exciting for the future of one of television’s most intriguing shows, we won’t know more until new teasers and promos are released, so we’ll keep you posted until the run up of the Pretty Little Liars season 5 premiere in June.