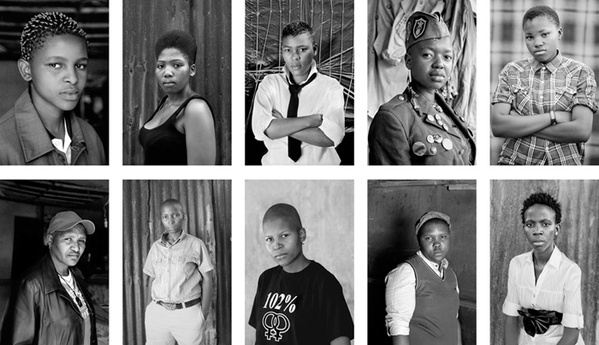 South Africa is one of Africa’s most socially progressive countries. Same-sex marriage was legalized in 2006, nine years before the U.S., and South Africa was the first country to instate a constitution that forbids discrimination based on sexuality.

Unfortunately, despite the progressive legislation, LGBTQ people are far from welcome. Every day, dozens of people experience physical or sexual violence at the hands of homophobic attackers.

Photographer and visual activist Zanele Muholi is using art to combat the injustice. Her project Faces and Phases documents South Africa’s queer women, their strength and their resilience in the face of violence.

Many women in the exhibit were “correctively” raped – that is, raped by a man who believes that heterosexual sex will reverse her homosexuality. Muholi’s portraits put a face to the shocking statistic that 1 in 2 South African women will be raped in her lifetime.

Faces and Phases began in 2006. Initially, it focused on black South African lesbians, but expanded in 2008 to include queer women from other countries. Today, it includes over 300 images. In addition to resilience, her portraits tackle the theme of identity; identity is fluid and ever-changing, and the self is dynamic.

Muholi has received backlash for her visual activism. In 2012, criminals broke into her apartment and stole equipment and hard drives containing five years of work. Unable to recover the lost data, she’s spent the past several years trying to recreate what was lost. The experience has been taxiing.

Her other notable exhibits include Somnyama Ngonyama, a comment on colonialism. In these photos, Muholi dresses up as South African historical stereotypes in order to reclaim and retell her own country’s history.

Her mission with all of her art is “to rewrite a black queer and trans visual history of South Africa for the world to know of our resistance and existence at the height of hate crimes in South Africa and beyond.”

You can order the Faces and Phases book here.