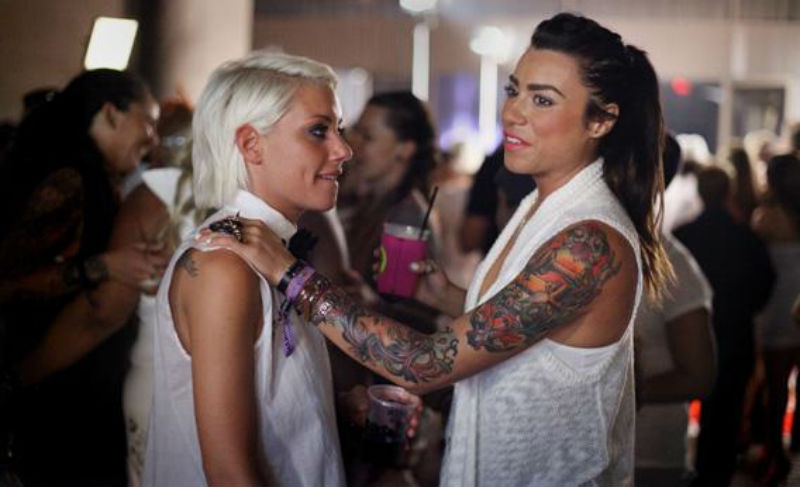 So I’ve been friends with a co-worker for about 8 months. We hang out a lot and have a great time. She’s gay, and so am I, but she’s never been with a woman before. A few weeks ago she told me she used to have a crush on me. We laughed it off. It didn’t bother me at all, in fact I was flattered, but she isn’t me type.

But since then she’s always making comments about what we’d be like together – as a couple and in bed, which is making me feel uncomfortable. Also, I’ve recently started dating someone new, which seems to have made her more forward. Last week we went on a big night out. My new girlfriend couldn’t come because of work, but my friend was there. She spent the entire night trying to hold my hand and flirt with me, which made me really uncomfortable.

I’m not a very touchy feely person in general so I didn’t like it. Every time I refused to hold her hand, she started asking me what my issue was.  That she was only doing it to be friendly. So I said fine and held her hand here and there. Then she started kissing my hands and asking me to kiss her on the lips because she wanted me to be her first.

I told her straight up ‘no’, and she played it off as her being drunk. Since then she’s become flirtier, and making out there could be something more between us, and I’m just playing hard to get. I hate confrontation and I don’t want to lose her as a friend but it really bothers me the way she acts. Am I overreacting? How can I let her down?

Wow – this sounds like a painfully awkward situation to be in! Since it makes you uncomfortable and you’ve already let her know this, what she’s doing is technically sexual harassment. Now, it doesn’t sound to me like you’re trying to press charges against her or get her fired or anything like that, although you probably could. Let’s just stick that in the “worst case scenario” bin for now.

You are definitely not overreacting. It’s one thing if it had bothered you just hearing she had a crush on you – we can’t usually control who we develop crushes on. But she doesn’t have a crush, she has a serious boundary problem. Especially since it’s gotten worse since you became “off limits” – not that you should have to “belong to” someone else to get a little respect.

From my perspective, I see a number of reasons why you would be uncomfortable about her touching and hitting on you, all of which are completely valid by themselves. The fact that she acts as if she has the right to make you uncomfortable is quite absurd – I’m actually doing a little research about Project Consent for another site I write for, and while what you’ve told me doesn’t exactly count as rape, it’s definitely the same type of mindset that can lead to situations like that.

If you really hate confrontation, this situation is probably not going to get much better. Unfortunately, this type of a mindset is hard to break, as a lot of people are seriously ingrained that want = deserve. This is not true. Just because she wants to be with you does not mean she is entitled to you, and it seems to me that she’s having a hard time understanding that.

My first choice for you would be to sit her down, perhaps with a witness, and explain to her exactly why it makes you uncomfortable. You shouldn’t have to explain yourself, but sometimes it’s necessary to put an end to a situation. Make sure you cite the different reasons you have: you’re not interested in her, you have a girlfriend, you’re not touchy-feely, etc. If you have to, make a few more up – you’re not into being with coworkers, you’ve got herpes, whatever it takes. Some people just don’t get it and you will have to be harder to get. (This is why I hate the whole “play hard to get” thing in the first place – it perpetuates rape culture and totally fucks with people’s minds.)

Have you spoken to your girlfriend about this behavior? While it’s not exactly your girlfriend’s job to fight your battles, it might help if you had her talk to your too-friendly-friend. It might be helpful for you and your girlfriend to speak with her at the same time, and she can be your witness (and moral support!) in the above situation. An unfortunate side effect of rape culture is that some people respond better to the person who’s seen to “own” the person they’re interested in. That’s obviously not always the case, so we’re going to turn into worst-case-scenario mode for a minute here.

If, after your girlfriend (and preferably you, as well) have told this friend how her actions are entirely inappropriate and unwelcomed, she still persists, you might need to make some threats. (Please do not move to this step until after you’ve discussed it peacefully but firmly.) I’m pretty sure sexual harassment in the workplace is illegal everywhere – and if it isn’t, it’s certainly frowned upon. It might even be against the law in your region, although you’ll have to look that up. Once you’ve found out exactly what your rights are, as childish as it might sound – threaten to tattle.

This is another one of the problems associated with rape culture: The person doing the harassment or assault often tells their victim that it’s their fault (such as her asking what your issue was for not wanting her unwanted advances). But no one has a right to decide what happens your body. You are its owner, and you get to decide who gets to touch it.

If she persists after you’ve made your threats, call the appropriate authorities – whether your local law enforcement or the human resources department at your job. If you’re able to get the law involved, you might be able to get a temporary protection order that requires a certain amount of distance be kept between you. It might sound really excessive, but this is why I’ve saved it for last – it should be a last resort after you’ve exhausted your other options. What she’s doing is wrong, and if you don’t put a stop to it, I can only see the situation getting worse.

Please let me know how things worked out – I am very interested in your story! Take care!