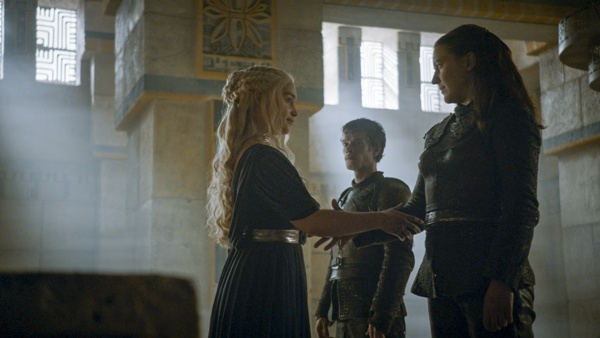 In the recently concluded season 6 of Game of Thrones, we learned that Yara is “up for anything” when it comes to romance.

However, the actress who plays the character doesn’t think that the Ironborn is bisexual.

I don’t think she’s bisexual. There’s a new saying going around, ‘pansexual,’ which means if she’s up for it … I think she says, ‘I’m up for anything.’ That’s her ethos. I don’t think she swings any way in particular, other than the way she feels at the time. She’s just open-minded, which fits the character perfectly.”

Yara’s open-mindedness was highlighted in her scene with Daenerys (Emilia Clarke) in the season’s penultimate episode, where the Ironborn – along with her brother Theon (Alfie Allen) – told the Mother of Dragons what they wanted from her and what their uncle Euron (Pilou Asbæk) wanted from her, too.

Euron is aiming for Daenerys hand in marriage for his help in taking the Seven Kingdoms, but his ultimate plan is to kill her right after she successfully ascends the Iron Throne.

When asked if she would like Yara and Daenerys’ relationship to turn romantic, Whelan told added.

Emilia and I both enjoy the idea. [Laughs.] We get along very well, so we enjoy working with each other quite a lot. So maybe! I don’t know! It’s up to the writers and the machinations of their minds. We like each other, we reflect each other, and whether it’s more than friendship is irrelevant, really.”

Would you like to see Yara and Daenerys as lovers? Vote in our poll and share your thoughts in the comments below!

Game of Thrones season 7 is expected to premiere April next year.