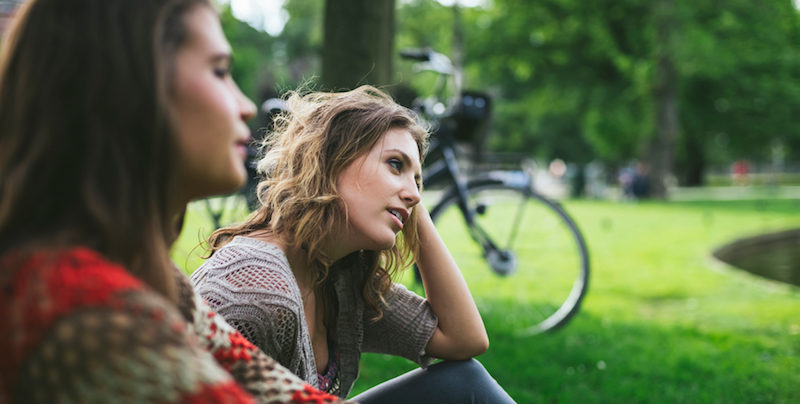 So many people suffer from anxiety in their everyday lives, but ‘Gay Anxiety’ is something very specific to many people that identify as queer. So what is it, exactly?

Well, to sum it up into a few words, Gay Anxiety is that thing you get when you dread any situation that might involve questions about your personal life.

Questions such as ‘do you have a boyfriend’ or ‘what does your husband do?’ when someone notices you are wearing a wedding ring. These types of questions fill some gays with absolute dread. To the extent that they will avoid any situation in which they might get asked something that involves disclosing your sexuality to a stranger or a group of people that you don’t really know that well.

To the anxious person situations like these feel them with dread. They have an ongoing battle within themselves. Two little voices battling to be heard. ‘Tell them you are a lez, you coward!’ shouts one voice. ‘Just say you are single and avoid the stares’ says the other. And it’s nothing to do with being in the closet or not being comfortable with who you are. It’s all to do with other people and their reactions and opinions.

Just like we don’t have signs on our heads saying we’re gay, homophobes don’t have signs on their heads either. Let’s be frank, who wants to tell their scissor welding hairdresser they are queer as she’s measuring your fringe against your eyes? What if she’s completely anti-gay and decides to give you a haircut that would rival something your mom could do armed with a pudding bowl? No siree, it’s far easier to say nothing. But if we are honest, how many times do we actually meet people that want to tar and feather us simply because we like the muff?

This is the problem with gay anxiety. All common sense goes out the window. We forget that this is 2016 and in actual fact not many people are really that bothered who you’re sleeping with. Because anxious people tend to dwell more on the ‘what if’s’ rather than the ‘logic.’ However, in the political climate we are living in queer peeps are bound to feel more anxious about declaring their sexuality to strangers.

We all read the press. We all see the news. We know what rhetoric Trump and his gang are coming out with. But what we don’t know is how many people in the general public think the same way. I guess it’s just easier to presume the worst and stay safe. But this isn’t the way forwards, not really.

We can’t go back 20 years and hide in shame. We do need to be out and proud.  So, the next time your hairdresser or your manicurist or the new girl from accounts asks you if you have a boyfriend, take a deep breath and tell the truth.

The worst that can happen? You get a negative comment. But overcoming an anxiety we shouldn’t feel is far more rewarding than bowing down to some homophobe who doesn’t deserve your time or custom. We can do it girls, let’s make ‘gay anxiety’ a thing of the past.