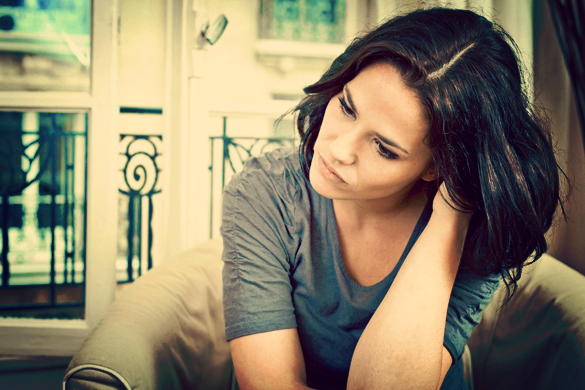 Q: My Girlfriend Wants Me To Do Something In Bed I’m Just Not Comfortable With

I really need help ASAP because my girlfriend and I just got into a huge disagreement and I am desperate for advice. I feel absolutely sick right now.

I love having sex with my girlfriend and it is always amazing, whether we use toys/vibrators, etc. or not. We have had sex with a strap-on many times, and she is always the one wearing it while I receive. She likes penetrative sex also and we have played around with me using dildo on her. She asked me a while ago to use a strap-on with her, and lately she has been asking more and more frequently to the point of getting frustrated and angry with me for avoiding it. I’ve told her that thinking about doing that turns me off completely, but she doesn’t understand and feels hurt that I don’t want to. I do see her point because even though we don’t have sex with it every time, I love when we do and I would be unhappy if she refused to anymore.

But honestly the thought of wearing a strap-on really is a major turn off. I’m very feminine and she is way more masculine than I am. It’s not like I think she’s the “man” in the relationship or anything like that. However, my femininity is what makes me feel sexy. Wearing a strap-on does not make me feel sexy at all. I’ve put it on when she’s not around and tried to imagine having sex with her and the look of pleasure on her face but all I feel is disgust.

I absolutely mean it when I say that thought of fucking her with a strap-on is actually repulsive to me to the point where I don’t think I could even mentally force myself to do it, no matter how good it would feel for her.

I’ve tried to gently tell her my thoughts about it, and then said no more firmly. I don’t know how else to say I don’t want to without shouting “IF YOU MAKE ME DO THIS I MIGHT THROW UP ON YOU.” She has never said, “if you love me you’d do it” (and she never would, because she’s not an asshole) but sometimes I feel like she’s thinking it.

I would never ever want her to force herself to do anything that made her uncomfortable and I hope she feels the same way. It’s not even that she’s being pushy or abusive towards me about it, but she’s clearly pissed off hence the disagreement. It basically ended with us looking at each other helplessly then I came to my room and started crying and I’m pretty sure she left.

Am I being completely unreasonable and selfish? Are there just some things you should do to make your partner happy even when you don’t want to? I feel terrible. I feel like I’m the worst girlfriend ever for being unwilling to do it. It’s not like I’m new to lesbian sex or intimidated by wearing a strap-on. I just don’t want to. She treats me well and we are so in love. I can’t stand the thought of this putting a strain on our relationship. Maybe we should see a sex therapist or something. But like I said, our sex life is great aside from this. What should I do? How do I talk to her about it?

Well, this is a tricky situation indeed. It does seem a little one-sided that you love to receive the strap-on but you aren’t willing to give it. There is one thing that stands out to me that I felt the need to mention – unless it’s specifically intended as gender play, there’s nothing inherently masculine about wearing a strap-on. It’s a sex toy, just like any other, with the added bonus of leaving your hands free for other things.

That being said, it’s also important that your partner be understanding of the things you’re not comfortable with, and it seems like the strap-on is a “hard no” in your book. It’s never right to demand something that your partner simply isn’t comfortable with – but it’s also not fair to demand something you wouldn’t be able to give in return. If you’re really not willing to give it to her, then don’t expect her to give it anymore, either.

Of course, I must ask – have you ever actually tried it? The idea of wearing a strap-on can seem intimidating from the start, which is possibly a bigger problem than the perceived masculinity from it. It’s a challenging new thing to learn, and doesn’t seem to be as straightforward as the use of other toys is. But once you get used to the idea of giving it to your partner with a strap-on, most women love to do it!

Keep in mind that there are straight women who use a strap-on with their male partners – which just backs up the idea that there isn’t necessarily anything involved that inhibits your femininity. In fact, there are some strap-ons that can penetrate both of you at the same time; if that might set your mind more at ease in regards to the presumed gender roles, then opt for something like that instead.

As a somewhat feminine woman myself, let me tell you – I enjoy giving it to a partner with a strap-on much more than I like receiving it from. It’s not about gender play, it’s about power – and being able to “fuck” your partner in that way is an incredible source of power.

I recommend you first give it a chance, to see if you like it. Don’t expect to be perfect at it at first – and make sure you listen to your partner. It’s possible that just hearing how aroused she is by it will eliminate the feelings of doubt you have. It’s also possible that you’ll really enjoy it. If you have a toy that vibrates, this can be a great feeling for the one wearing the harness – turn it on!

If, after trying, you are unable to enjoy yourself (or at least tolerate it enough to give it to her in the future), be honest with her about it. She might be very disappointed by this, but if she respects you, she won’t push you after you’ve given it a chance. Just don’t expect her to extend the favor anymore, either.