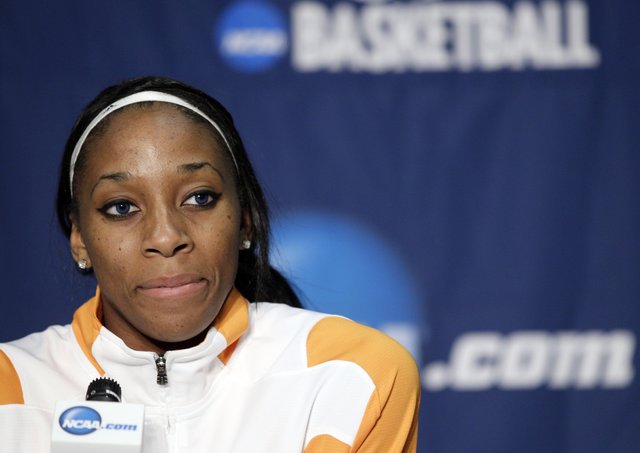 When reports surfaced that Brittney Griner filed for an annulment a day after Glory Johnson announced she was pregnant and a month after they were married – people were left asking a lot of questions on what happened to this sporting power-couple.

After a week of speculation, Johnson has released an emailed statement, stating that she is still shaken, but moving forward with her life.

I am truly really saddened by the recent turn of events and was not expecting to have our marriage end so abruptly. I am ready to begin focusing on my health, pregnancy and am going to remain in Tulsa to continue to build my relationship with the Tulsa Shock organization, and my teammates. I appreciate the support of my fans, family and loved ones and look forward to returning to the basketball court as soon as I can.”

She went into further detail about the rumours pertaining to whether Griner played a part in her pregnancy or not.

At no stage was Brittney pressured to undertake the fertility process. In fact, throughout the entire process, Brittney was a willing participant, consenting and signing all the necessary documents that needed to be signed in order to move forward with the treatments.

I would like to address the inaccurate statements released surrounding my marriage and pregnancy, so that I can continue, after this statement, to focus on my privacy and allow our lawyers to handle this situation.”

Griner stated last week that she married Johnson under duress. Johnson said the decision to move forward with the wedding was mutual.

In addition, while we may have both had our reservations, we both willfully and joyfully walked down the aisle together and decided to get married.”

Last week, Johnson’s agent, Boris Lelchitski said the Women’s National Basketball Players Association was planning to file a grievance to appeal the suspensions for both players, but Griner backed out. Lelchitski said the deadline has now passed, and his client did not appeal.

Johnson’s suspension will not start until the 2016 season because she will not play this season.