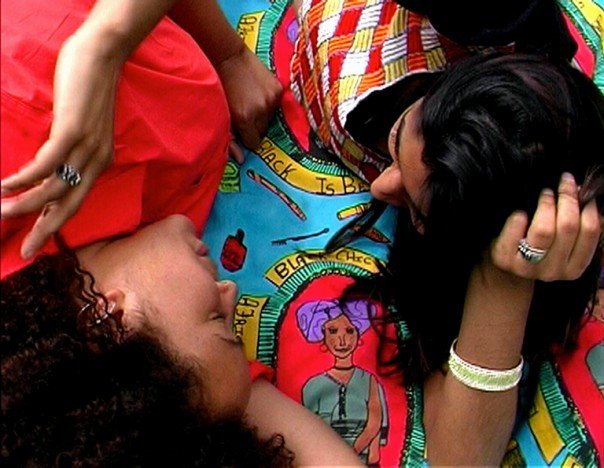 When the clock struck midnight, I traded in my boxers.

I, a proud butch woman, swapped my button-downs for a crop top and my bowties for short shorts. For exactly one day a year, I had to be a Good Caribbean Woman.

As I dug through my drawers to find the only non-sports bra I owned, I doubted whether my mother would be happy at the idea of me dancing half-naked in front of a quarter of a million people. But I knew that she would be happy that I finally fit in with the other island girls.

At 4 a.m. on Labor Day, 250,000 people flooded into Brooklyn swinging cans of house paint. Baby powder exploded into rainbows. Men tied their island’s flags around their necks, women wrapped theirs to cover their hair, and Eastern Parkway became a sea of Jamaican greens and Trinidadian reds. J’Ouvert had begun.

To outsiders, J’Ouvert looks like a giant, drunken paint party, but the holiday has hundreds of years of significance in the Caribbean community. Slaves began hosting yearly celebrations called Carnival in 1783 because they were banned from white masquerade balls in Trinidad, and J’Ouvert began as an expression of freedom after the island emancipated slaves in 1838. By grinding on strangers, not only would I be fulfilling my mother’s expectations of femininity, but I would also be celebrating history. (Right?) My girlfriend tagged along to laugh at me.

When the music started, I charged straight into the mass of sweaty, dancing strangers and let the drums control my hips. I gyrated to steel pan and salsa danced to clave. I squealed girlishly when men poured paint down my shirt. I shook pink baby powder out of my hair.

“Get your flag!” my girlfriend shouted, and I proudly tied it around my neck while she took a photo from behind. My mother would probably frame it.

When I looked at the photo, my stomach twisted. With my fists planted proudly on my hips and the V.I. eagle catching the sunlight, I looked like a Good Caribbean Wonder Woman. But a man in the background was staring at me slack-jawed, eyes fixated on my body like he was about to undress me.

Cold hands slithered around my waist, and I jumped. “Let’s dance,” the same man said.

I yanked my girlfriend away. Was this what I really wanted?

Someone reached out to smack an orange handprint on her shorts, and another man grabbed at me, saying, “Hey, Superman!” I felt sticky with dirt and sweat and paint and a panic I couldn’t quite place.

At home, I stood under the scalding shower and watched the paint on my skin pool into rainbows beneath my feet. Gone, gone, gone. I couldn’t make the water hot enough.

My girlfriend knocked. I thought she was going to join, but instead, she read me an article: Barely an hour ago, a twenty-two-year-old woman had refused to dance with a man at J’Ouvert, and he shot her through the eye.

The accompanying photograph showed the woman smiling broadly, hair curling down her back, a dress brushing her knees. My mother would have loved her, because she looked like a Good Caribbean Woman. And she’d been killed.

I thought of all the men I’d run away from that day. What if one, just one, had pulled a gun? If I’d dressed in my usual men’s trousers, would I have been safer? That was unlikely; guys often confronted me to “fix” my gayness. In the eyes of those men, being a good woman had nothing to do with the way I was dressed, because they were already thinking about what was under my clothes. My mother’s definition was tied to my ability to entice men, but I couldn’t rely on them – or her – to define “good” womanhood for me, I had to define it for myself. And I was tired of being good.

I’m still trying to figure out what womanhood will mean for me, because it entails a long process of undoing years of internalized heteronormativity and misogyny. But right now, being a Good Caribbean Woman is about saying no when I want to say no. It’s about wearing what I want to wear. It’s about fighting the next guy who tries to slap an orange handprint onto my girlfriend’s shorts.

Maybe my mother wouldn’t approve, but I’m proud of my Caribbean womanhood. I have the painted flag hanging in my room to prove it, and I just bought a button-down to wear to next year’s J’Ouvert.