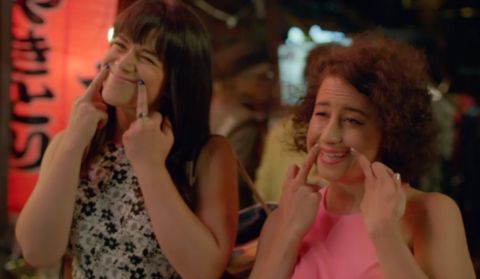 One of the first and most important things I learnt when I got into feminism was to give a name to one of its enemies, and find out that many of my own behaviours were linked to it: this enemy is internalized misogyny and it means the way we have been taught by society to think of our own gender as inferior.

Internalized misogyny can be demonstrated through ‘girl hate’ (the bitter feelings we may often have for other women – jealousy, antagonism, a tendency to undermine them or differentiate ourselves from their group), prejudices that concern stereotypically ‘female traits’, or even feelings of inferiority about our own selves because of our gender.

The point is that we can hold unintentionally misogynistic ideas even though we are women. Most of us, especially as we become more aware, start recognizing behaviours and opinions that we used to hold and are caused by internalized misogyny. That doesn’t mean we can’t grow out of them and mature. It happens partly because that’s how we’ve been taught to perceive most accomplished women around us, and it’s something that I’ve drastically changed the way I see it nowadays.

But which are the most common behaviours, ideas, and perceptions for ourselves and for the women around us that are caused by internalized misogyny?

Trying to exclude/differentiate myself from (groups of) other women.

One of the most common ways internalized misogyny can be demonstrated, is through our constant effort to exclude ourselves from the wider concept of our gender and of society’s perception of it, in order to feel superior than what we’re taught a woman is. Throughout my childhood and adolescence girls were my best friends who supported my through everything and boys were my bullies. However, I still prided myself to be ‘not like other girls’ (sometimes including my friends who I deemed as cool and intelligent in this special ‘different’ troupe) and I remember boasting that I thought and acted like a boy. I saw most women as the enemy, being too anxious to diminish their worth in my head because they put on too much makeup or they stuffed their bras, things that I undoubtedly did myself.

I wrote Harry Potter fanfiction my entire life – and no one has yet declared this period over. I always wrote male voices (mostly Sirius and Remus’), even though Tonks – a brave, strong, colourful warrior, lover, and mother who broke the gender norms – was my favorite character. The reason I didn’t choose to write her point of view that often, even though she was that cool of a role model, is because I remember boasting how hard it was for me to capture the voice of a woman – although I identified as one – and how I can work with the way a man thinks best. My best friend had affirmed that, sure, my mind worked more like a man’s than like a woman’s. Both of us, for what is called internalized misogyny, thought at that point that this was the best compliment she could pay me ever.

All that makes sense: The mass-media with which millenials have grown up, even in their progressive versions, have been showing us caricatures of women, telling them that they should know their place in life. We’re told that women are too sensitive, functioning more with feelings than with logic and common sense (actually that bit has strategically been built up for centuries), that we’re too hard to understand, that we’re too much ‘bitchiness’ and drama, but maybe it just looks this way because our ideas, needs and demands to be treated as equals are rarely even heard. Not to mention trans women, who are 90% of the time depicted horribly stereotypically, and are the butts of the joke in most movies. Nothing can be more harmful than that. These are stereotypes that completely ignore the fact that women are not, after all, a homogenous group. Apart from some exceptions, women are taught by society that they’re worthless and that, as a result, the only way to achieve something in life, is to prove that they’re the least worthless of their group.

Degrading others to climb up somewhere yourself comes like a survival plan, and this is just horrible, because girls are awesome. When I took off my internalized misogyny glasses, I started realizing that brilliant, interesting, diverse girls are not the exceptions, but they’re everywhere around me, they’re often better than me, and I should learn to take them as role models and cherish their friendship instead of making a competition out of it.

Blaming other women for my oppression.

So what happens is that we as women are taught that, with all those horrible traits society thinks we possess, other women are to blame for the bad things that happen to us. When the girl or the boy we fancy in high school fancies another girl, it’s her fault for being too promiscuous or ‘fake’, and when our boss is a woman she’s not ‘strong and determined’, but ‘bossy and a bitch’. We slut shame, we grow hostile, jealous and competent of each other, denying ourselves friendship and comradeship, because you can’t be friends with the person you subconsciously think you are competing with.

Projecting those ideas of inferiority on myself.

Even after we realize how strange it was to be so hostile towards Kirsten Stewart as we grew up (plus after getting a crush on her), there are some things that are caused by internalized misogyny and are still too hard to brush off. We often fail to recognize our value, or how good we are in things we do, sometimes even getting the feeling that we don’t deserve the recognition we get about them, that we didn’t achieve anything that important, or that we achieved it by mistake, by luck, or by fooling each other. I have felt guilty for being congratulated for my work many times. That is called imposter syndrome, and it sucks, because men are taught by a young age to know their worth, while we may even feel the need to apologize to our professors or co-workers for potentially having fooled them into thinking they’re better than we are.

That can go to great extents. I mean, it can even be demonstrated as the underlying assumption that I don’t deserve my partner giving effort to please me during sex, that they’re doing me a favour when, for example, I take too much time.

…or that I deserve the unpleasant things that can occur if I don’t meet up to the expectations set up for women by our society.

When I was in high school I had a fashion blog that my bully classmates found and sent me comments which were awful, disgusting and definitely things that a boy wouldn’t hear that easily. I didn’t have the choice to pose wearing my DIY shirts and owl bags with my slightly pretentious sixteen year-old ‘model’ face in my personal blog, without being slut-shamed, ridiculed and harassed online, only to have the professor I went to in shock, to tell me that I had practically signed up for my harassment the moment I made these pictures public.

Last year I decided that I liked hair on me. Not necessarily to make a statement – even though I don’t regret making one. I just happened to start preferring my body with its natural hair – everywhere. So I stopped shaving. Since then, most shocked and patronizing comments have come from my family, but the fact that friends, classmates and strangers on the street may have, until recently, been silent about it, doesn’t mean that I don’t get weird, even offended looks all the time. I’m more used to it now, and I laughed when I realized these girls on the bus were discussing my leg hair with horror, but I used to be much more self-conscious about it.

A couple of weeks ago I learnt from a guy from school, that his sister – to whom I haven’t talked in about five years – knows and has discussed my leg hair from another classmate that goes to my university. We don’t communicate with that girl at all, we barely say hi once every semester, yet she thought that my leg hair was that big of a deal that she should discuss it with people who probably don’t even remember what my face looks like. Why do they have to make me feel bad about a choice that has to do with my body, just because that choice doesn’t meet up with what a woman is supposed to do to meet society’s unrealistic, problematic beauty standards? Why does every family member and passer-by on the street feel they have the right to stare at me, an already self-conscious person, with eyes wide open in surprise? What made it okay for them to stare until I feel like I have done something bad?

People have learnt that they have been given the holy right to police personal choices that have to do with my body or my appearance just because I’m a woman, and that I am to blame if I think that sucks.

Internalized misogyny, homophobia, biphobia, and transphobia, are mechanisms of self-blame and degradation caused by the social discourse that labels some identities as inferior to others.

It surely takes time and effort, but we need to actively fight against those mechanisms, in order to be able to support, not only others against the oppression they face because of their identity, but also ourselves.