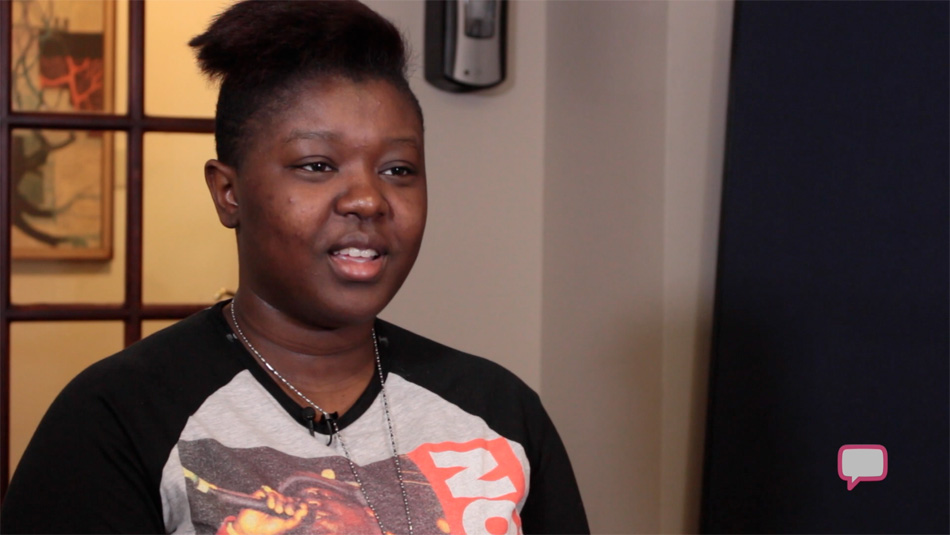 ‘I’m from Driftwood’ is a collection of lesbian, gay, bisexual, transgender and queer video stories from all over the world.

Alex Williams, from Philadelphia, is a trans* teen on a path to self-acceptance.

However, despite having a mother who is unaccepting, Alex finds his source of strength from his girlfriend and a support system at school.

A Trans Youth’s Story of Self-Acceptance

This is Alex’s story…

Ninth grade, I come out as bisexual, just to put my foot out there a little bit. And then tenth grade hits, and I just realized, like, I’m not bisexual. Obviously, I like girls, so then I started to begin accepting myself. I believe it was January, like, 2nd, after New Year’s, my mom goes through my Facebook and my iPod, and she sees that I made a new Facebook and I was open on that Facebook. And then she just started going crazy, and she started to just give me the whole Bible and I was crying and she was crying and it was very emotional. She called my girlfriend, and was like, “Oh, y’all can’t be together. You have to break up. It’s done.” And I called my grandma, and was crying for my grandma to come over. I thought my grandma could save me, but it got worse, because my grandma started to come with the Bible and everything, so it was just really bad.

And March comes along, and this is a bad day. I don’t know, it was just a bad day. I get home, and me and my mom get into it about the situation. And my mom sends me away to Belmont. I love going there, because I felt like it was a break from everything, and I didn’t have to worry about anything, and it so happens that it was on Spring Break or something, so I didn’t have to worry about school. So it was a perfect opportunity just to worry about me, and just to focus on me and what’s going on. And I have better coping skills. And there, I did group. I did individual therapy. My parents and family visited, and there I felt like I was brave enough to stand up to them. So one visit, they came, and something happened, and they brought up the conversation of my girlfriend, and then I just was like, “You know what? It is what it is. I have a girlfriend. You should get over it. I am who I am.” And it was just a big fight, and I ended up storming out, and just running out and going into my room and closing my door. And I was happy, because they couldn’t go back there. Basically, I felt like I was protected. And then I was in there for I think almost two weeks, and I got out.

I live with my grandmom currently, and my grandmom isn’t as bad as my mom, but my grandmom is trying to be more understanding, and she’s trying to be not as controlling as my mom. And that’s a good thing. I can live in that environment. I feel like with my mom, I can’t live in that environment. I mean, recently, there have been situations, because recently I’ve come out as trans*, but my family doesn’t know that, but my school does and my friends do. It’s more like a support system, and my mom still has this controlling thing that she has. She tries to control every aspect of my life, even though I don’t live with her or anything. So it was still like a daily struggle.

I actually saw her today, and we had a big falling out today, because she said that my girlfriend is not allowed to come to my graduation. She was like, “I don’t want to see that. I don’t want to see that lifestyle.” I said, “Well, you might as well say you don’t want to see me, because she’s going to be there, and whether you’re there, that’s fine. But she’s going to be there.” She’s been there since day one. We’ve been going out for two years, and she’s my support system. She’s like my backbone, and anytime I have an argument with my mom or my grandmom, I know that the first call I’m going to make is to her. And we talk a lot and she supports me, and she helps me. Like, if I’m having a bad day, she’ll help me cope or anything. She’s my coping skill.

When I was in Belmont, we were in group, and we were talking about what do you live for, and what do you want your future to be. And then, in that group, I just realized that because of who I am right now, that doesn’t mean I have to cut my life short. And I realized that I just need to keep going, and no matter what, that I’m on this Earth for a reason. I’m this way for a reason. And I just wanted to live. I finally just wanted to live.