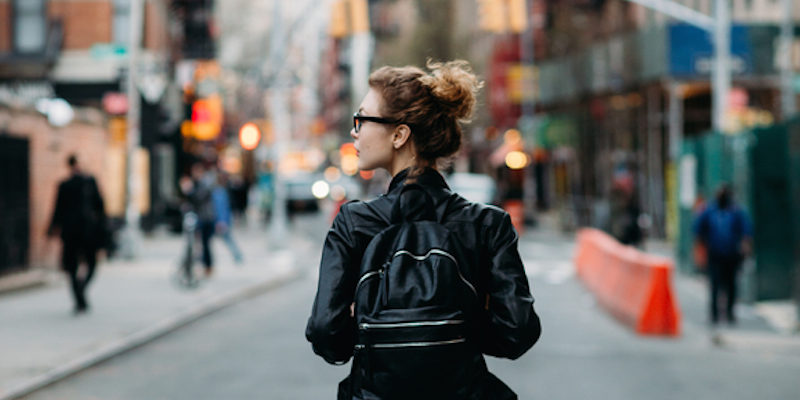 For years I hide my sexuality, but now I’m out, but that doesn’t seem to be enough. I’m struggling here. Whenever I go out people assume I’m straight. Then when I tell them I’m not, they look at me skeptically, like I’m lying.

Some women find my ‘straight’ girl appearance a turn on, others a turn off. But no seems to want to enter in to a relationship with me. It’s like there is some sort of fear there. That I’ll head back to the straight side. I’m a fake, a fraud.

I enjoy having long hair, wearing dresses, and I want to stay true to my ‘femme-side-of-the-spectrum’ self. But this isn’t working for me. I just want other ladies to believe I’m ‘gay’ (not prove over and over again), so that they’ll give me a chance. Help!

It’s a tale as old as lesbian-dom itself: The invisible femme. I don’t even personally consider myself a femme, but I happen to fall victim to this, too. Apparently I have a “straight face” or something? I don’t know.

(Even one of the quizzes here on KitschMix told me I was actually straight! I can’t win.)

Even when I’m wearing flannel and Chuck Taylors.

And all my rainbow jewelry.

At the gay bar.

I just don’t look gay – and it’s actually taken me a long time to feel comfortable with that.

It might actually have something to do with how long we stay in the closet (but don’t quote me on that). I was a relatively late bloomer among my gay friends, and I even briefly went “back in the closet” for a while to try and prove to myself I was wrong about liking girls… But all I proved was that I am so, so gay. It sucks feeling like you have to prove yourself, especially if you actually fail miserably at it.

I wish I had some easy advice to tell you how to look gayer, but unfortunately for some of us it’s just not possible. In some ways, that can be a benefit.

My current girlfriend is usually attracted to super girly girls – which I am not – but there’s a sexiness she sees in me; something about how “girly” I still look in my ribbed tanks and basketball shorts. (Okay, so they’re actually hers, but still.)

I’ve had jobs where I was afraid to be “out” around my coworkers, and… Well, no matter how gay I try to look, it doesn’t happen – which works out pretty well if I’m trying to be “straight-acting”.

This isn’t the case when you’re trying to find a lady, though. I get completely looked over unless I’m looking online. The only reason my current lady ended up approaching me? I was friends with her cousin – and she found me on Facebook posting a bunch of memes about vaginas. (Hint: That helps, but it can be difficult if you have family or super conservative friends on your Facebook.)

I have never been checked out by a female in public, nor have I ever been approached in a bar. (Well… Not by a female. I really did have some guy who got creepy-obsessive who I met at the gay bar, who was apparently there to pick up girls, and he assumed that since I was the “straightest-looking” lady in the bar, I was fair game. Not great.) Most of my past girlfriends have been jealous over my friendships with guys because they assume that “the gay thing” is just a phase. Hello, it’s almost 2016, we shouldn’t ever assume that someone’s sexuality is just a phase. Even if it is, that’s nobody else’s business but theirs.

I actually met someone through friends once, and after several hours of my shy flirting with her (apparently I’m not very good at that either), she tells me “So I have yet to see any proof that you’re actually gay.” At this point I was feeling like she was ignoring all my advances, so of course I responded with, “Well I haven’t seen any proof you are, either.” I was actually tempted to provide her with a list of references. That’s how bad it is!

That’s not to say that I don’t still “try” to look gay sometimes, though. I’ve still got my rainbow jewelry, and if I’m going out without my girlfriend I make a point to dress more studly – not that it works very well. Beanies can help, but with “lesbian fashion” being pretty much the same as “hipster fashion”, it doesn’t make much of a difference anymore.

Rather than trying to prove your gayness, focus on being more confident in yourself. Your confidence will attract a better caliber of partner… Someone who cares less about how gay you look and more about how awesome of a person you are. Most of the time, the best relationships come when you’re not actually looking – and the less focus you put on it, the better your chances will be.

(Not to mention, a “DGAF” attitude is super liberating. I can’t even explain how freeing it can be when you’re more worried about making yourself happy than fitting in someone else’s label.)

If you want to have a little fun with the idea while still being true to your femme self (which you totally should; femmes are great!) consider this “Nobody Knows I’m Gay” shirt. It’s totally cute, still girly, and it might help to drive the point home.

3 thoughts on “I’m Not Gay Enough”

PrevPreviousIs She Interested in Me or Am I Reading This Wrong?
NextThe Pros And Cons Of Dating A Pillow PrincessNext