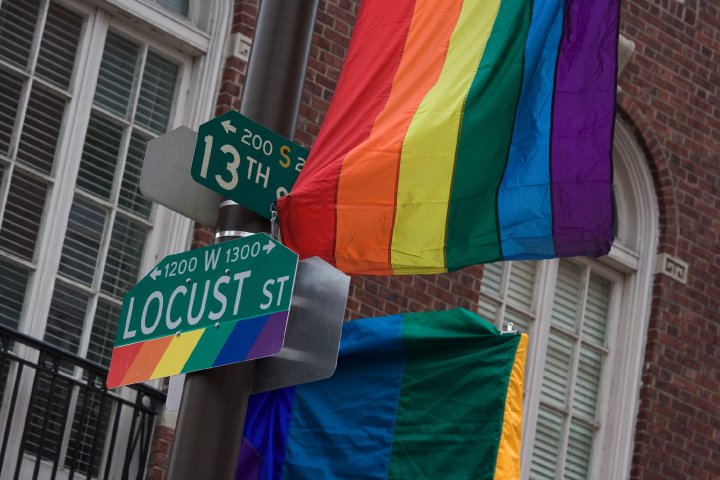 Imagine living within walking distance of the hottest shops and restaurants. Chinese take out is available 24 hours a day, vintage Christian Dior is easy to locate (and thats hard), and there’s something new to do every night. Welp, you may just want to move to a gayborhood!

If you’re unfamiliar with this term let me help you out. A gayborhood is a neighbourhood with a large concentration of gay men and women in one area. San Francisco, New York, and Portland are just a few cities with such neighbourhoods. Gayborhoods are known to consist of the hottest nightlife, diversity in cultures, and beautiful people (apparently I don’t live in one then).   While some may argue that gays drive our neighbourhoods and economic system into the ground, I’m here to tell them they’re dead wrong…I’m talking bout you Michele Bachmann.

In a recent interview with the Huffington Post, Professor Janice Madden (a professor at University of Penn)  found that there is a split between where gay men and lesbian women decide to live. Gay men are drawn to inner city locations just like Chelsea in New York. These parts of town are usually referred to as upscale and trendy. Lesbian women are more likely to live on the outer parts of the city closer to a suburb. This is typically due to fact that lesbians are 4 times more likely to have children, which drastically changes where one wants to live.  Researchers also found that gays have a positive effect on gentrification and the economic aspects of a town. According to a research project conducted by Professor Janice Madden over a decade in which gays will have come to a neighbourhood, the per household income and population will have increased significantly. Looking at a CNN report we can also note that the popular Castro neighbourhood (which consist of 14% same sex couples) is also one of the most expensive places to live in San Francisco. Housing prices seem to increase as well, which is due to new shops and restaurants being opened. Professor Mickey Lauria of the University of New Orleans found that the presence of gay men in the real estate industry of San Francisco were vital to the urban renaissance of the 70s. American academic, Richard Florida, even found that gays lure in investors and new jobs.

Its sounds like time to snatch up a place in new emerging gayborhoods. Nyack in New York is quickly becoming popular among lesbians and is quite affordable at $300 per square feet. An alternative to the popular and expensive West Hollywood would be Eastside, Long Beach. This neighbourhood is half the rent of West Hollywood and expanding rapidly. Get your space quickly before rents start to rise. But if you can’t afford to live in one of these stylish gayborhoods don’t fret! Just remember that the gays are coming.