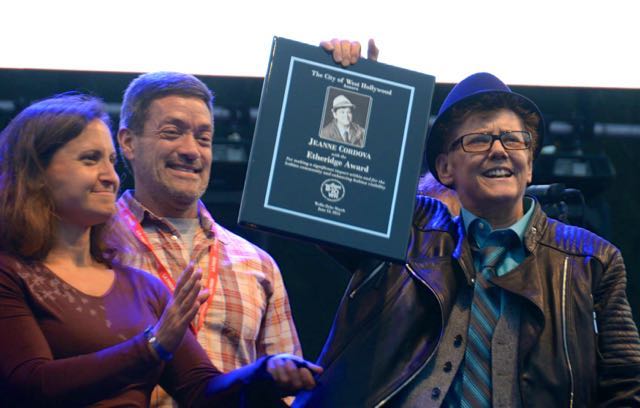 Long-time lesbian activist, journalist, author and creater of When We Were Outlaws, Jeanne Cordova is dying cancer, but as one final gesture to the community she loves, she is donating $2 million to the Astraea Lesbian Foundation – an organisation that focuses on human rights, journalism, and promoting our culture.

Córdova has continually witnessed her generation break free from heteronormative modes of thinking in every aspect of life.

Lesbian feminists have “gone against the grain and rethought everything,” she said.

So I feel strongly that we should not think heterosexually [about wealth], like ‘I’ll give it to some random relative that I’ve never met’. We need to think about giving to our gay or lesbian youth and institutions like Astraea or other lesbian organizations. They’re the ones who are nurturing our real daughters right now, around the world.”

Noting how much ‘the movement’ has changed since the early 70s, Córdova suggests lesbians and gays get ready for more vast changes to the face of women’s roles.

None of us can do more than guess at the unique issues and challenges our community will face in the future. I am proud to be able to give to a LGBT charity now, and specifically a lesbian one. It’s important that we boomers look to sustaining ourselves, just like Bill Gates or David Geffen.”

while she may be weak, she is still feisty and brave as she talks about that taboo subject of death in this footnoted goodbye letter to her beloved LGBT community

A Letter About Dying, to My LGBT Communities

This letter is meant as a notification and thank you to the thousands of members of the national lesbian community whose activism, lives, and Ioves have touched my own. Especially those dykes who have become family and siblings of choice over the last 40 years. Yes, the rumors are true, I have metastasized to-the-brain cancer. I am dying from it in my cerebellum.

I have had cancer since 2008. Colon cancer. For the first four years I brushed it off, as I’ve done many times with physical illness or difficulties. I continued my activism with the Lesbian Exploratory project and I finished my third book, When We Were Outlaws. The cancer came back in 2013. Metastasized first to my lungs and then to my cerebellum. Yes, my head. With brain and back-of-the-neck cancer it has been a downhill experience the last three years, with multiple operations, radiation and Chemo. This February I had Chemotherapy. Among a host of side-effects, it’s given me “chemo brain,” which amounts, basically, to “getting stupid.” Just saying. This month’s so-called side effect is peripheral neuropathy. That’s from Chemo, they say, and it makes your feet, fingers and hands feel tingling and numb like when you fall asleep on your leg or hands. Only, it doesn’t go away. I can’t stand up without holding onto a wall or background support. I can’t feel where my feet are. Yeek! I freak myself out talkin’ about it! How about you?

A guru once told me, “We die in increments, one piece at a time.” She meant one part of our body suddenly ceases to work, an elbow or a tongue. Seemingly for no reason, like a worn out knee. This came as a surprise. I thought we get old or die…suddenly, and all at once. Not so!

Many of us have gotten cancer and died. I write publicly to the women who have defined my life because I want to share this last journey, as I have shared so much of my activist life with you. You gave me a life’s cause. It is wonderful to have had a life’s cause: freedom and dignity for lesbians. I believe that’s what lesbian feminism is really about, sharing. We built a movement by telling each other our lives and thoughts about the way life should be. We cut against the grain and re-thought almost everything. With just enough left undone for our daughters to re-invent themselves. Death should be a part of life. Not hidden, not a secret, something we never said out loud.

Being an organizer and journalist in the lesbian, gay, feminist, and women of color communities—and loving it–has been the focal point, of my life. It has been a wild joyous ride. I feel more than adequately thanked by the many awards I have received from all the queer communities, and through all the descriptions and quotes in history books that have documented my role as an organizer, publisher, speaker, and author.

Thanks to all of you who have given me a place in our history.

From the age of 18 to 21, I painfully looked everywhere for Lesbian Nation. On October 3, 1970, a day I celebrate as my political birthday, I found Her in a small DOB (Daughters of Bilitis) meeting. That’s when my life’s work became clear. Shortly thereafter I became a core organizer for two national lesbian conferences, one of which re-directed my path to create The Lesbian Tide newsmagazine, a national paper of record, as the historians say, for the lesbian feminist generation. And on it went for multiple decades of marches and later online organizing–this time intersectionally, to include all of me and my Latina identity.
Somewhere in the middle of all that I, somewhat accidentally, invented the Gay & Lesbian Community Yellow Pages, a first for our by-then national tribe. This Los Angeles 400-page guide that helped us still-half-hidden people to connect, politically I thought initially, with businesses and professionals that spoke to us within our own identities. That it did, but this directory and lucky timing in life-long real estate, also enabled me to fulfill an early personal vow to give back half of my estate to our movement. I do this with Astraea Lesbian Foundation for Justice (out of New York City) and other organizations. I believe it so critical to our transforming movements to leave our estates to our LBGTQ charities, not some errant heterosexual relation we hardly know! More on this political news and views to follow. (*1)

I believe that cancer or any terminal disease is the luck of the draw. As my mother used to say of my Aunt who was also a nun of 90 years, “At that age, you got to die of something.” I have read the obituaries in Lesbian Connection (*2) these last years as they chronicle the passage of my 2nd wave generation. The one message that rings out clearly is that so many, many in these pages were activists who articulated social justice in their local or regional spaces. Many dykes making change. So many of you or loved ones have gone through death rituals these last years. It makes me feel like one-of-the gang … again!

I really don’t know when or if I can write again. Mental competency and all that. The choice appears to be living with chemo forever off and on, or dying. I will make that choice soon enough. In the meantime, please write or speak your own truth in living with dying (*3) to your lesbian newspaper or my blog below(*4).

I want to say THANK YOU to all of you who have loved another woman-identified-woman, who have loved me, or have loved Lesbian Nation. I wish I could still write about this kind of love more eloquently. Lesbians do have a special love for one another. I have felt it many times when women are with each other. I am happy and content to have participated in it for most of my very full and happy life. Least you be too sad, know that I have this kind of love not only with my family of choice, but with a straight arrow spouse with whom I have journeyed these last 26 years.

*3 Cordova is in the process of a fourth book due out “maybe someday,” called Living With Dying.