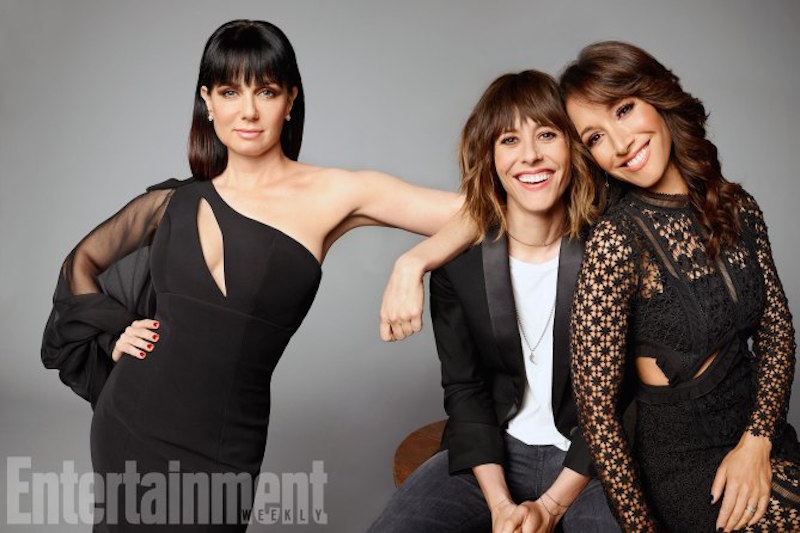 Last month, Entertainment Weekly reunited The L Word cast for a stunning cover and catch-up interview. At the time all all expressed an interest in returning for another season.

Now, that sequel is look to be a reality.

The L Word’s co-creator, Ilene Chaiken will be an executive producer of the series with a new writer/EP with ties to the lesbian community  brought in to run the production and once again chronicle the friendships and love lives of modern gay women.

Jennifer Beals, Katherine Moenig, and Leisha Hailey are set to executive-produce as well as appear on the series. Other characters from the original series may also pop up and will be paired with a whole new cast of women.

Talking to EW, Beals explained why the moment is right for The L Word to return to television.

Years ago, Kate and Leisha and I approached Ilene because we were shocked that nothing had taken its place. There was this renaissance, in a way, going on with marriage equality coming to the forefront. It was a different terrain and we thought you can start telling stories in a different way and there’s a whole new generation coming up that views sexuality in a different way. Ilene was in the middle of doing Empire and she was very excited about the idea but there are only so many hours in the day.

Then, the election happened. I remember I was in South Dakota watching the returns come in and I texted Ilene and I said, “We need to do something.” She said, “Let’s get together and talk about it.” So we were spitballing about what to do and I said our skillset is storytelling and I think we need to tell stories and certainly in an atmosphere of increasing hatred towards the LGBT community and frankly anyone who’s categorized as “other,” stories exploring the complexities of friendship and love are all that more crucial. Representation of everything. You can’t go backward. I would love to see the show continue to mine its original themes of friendship and love and community and additionally I’d like it to go a little further and challenge heteronormalcy.

At the reunion, Kate Moenig was adamant that season 6 be forgotten — which means Jenny Schecter lives – but Beals is not to sure.

You really got to hear the pitches of what they want to do. That person is taking on a huge load. They have the history of the show, the legacy of the show, and yet they have to make it better and they have to make it theirs. So to dictate too much at this point in time I think would be problematic. I want to hear what’s coming from them and what excites them and what stories they want to tell because that’s when it’s going to be good when you let somebody fully have their voice.

And on Bette and Tina’s future, well Beals was a little cagey

I don’t want to even say what I would like to see at this point because I think it’s more important for me to be open and listen to people’s ideas and not get stuck in my own desires. If somebody says I think she should be a cheerleader for the Dallas Cowboys. I’m gonna say, “Well I don’t think that’s such a great idea.” Can you imagine? That would be funny [Laughs].