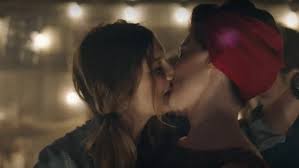 Kellogg’s recently released a new advert for their Special K brand, titled ‘Own It’.

The advert featured a range of women of different shapes and sizes in various stages of life – including two women who are briefly shown kissing while dancing at a party.

Sadly, the ad attracted a negative response, especially from one viewer, who complained to the Advertising Standards Board Australia that the scarred their 7-year-old son for life… hmmmm

The add [sic] was ruined where it showed two women kissing.

Why it did one can only wonder perhaps it was trying to support a particular agenda (eg desensitising the public) however regardless, that physical act doesn’t have anything to do with a breakfast cereal product that anyone in our society might choose to purchase and enjoy.

The ad should consider the well being of the younger generations of children and families as well as everyone else.

I object to the kiss. Must we have the lesbian message shoved in our faces all the time. My 7 year old boy doesn’t need that happening in his lounge room.

The ad was shown during family viewing time and included two women kissing as a couple in an attempt to normalise this behaviour.”

Thankfully the advertiser body rejected the complaint, writing back:

The Board noted the complainants’ concerns over the depiction of two women kissing one another.

The Board noted that this scene is very brief and considered that the overall tone of the advertisement is of women behaving confidently and there is no undue focus on this particular scene, which is very fleeting.

The Board acknowledged that some members of the community might be uncomfortable with images of women kissing women, but considered that all the depictions of kissing in the advertisement are very brief and are not shown to lead to any further intimacy.

Consistent with previous determinations against similar complaints concerning men kissing and of women kissing (…), the Board considered that in this instance a brief depiction of a woman kissing a woman was not sexualised and in the context of depictions of confident women and loving relationships this scene was not gratuitous or inappropriate.”

And Kellogg’s response was on point.

Kellogg acknowledges that there may be some members of the public that will be offended by a scene depicting two women kissing.

We respectfully submit that whilst some individuals may be offended, the advertisement does not depict the scene in a way that vilifies a person or section of the community, including on account of religion or sexual preference.

A scene briefly portraying two women kissing, in the context of an advertisement that celebrates the reality of female diversity, cannot be regarded as discriminating against or vilifying consumers with religious or other beliefs in a manner contrary to the AANA Code.”