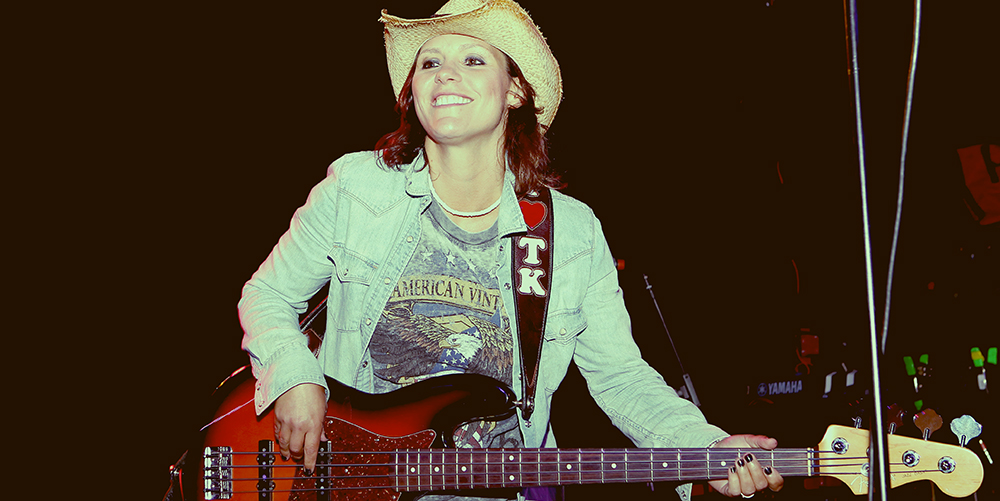 The bassist of openly lesbian alt-rock band Antigone Rising talks to us about hanging out with the Rolling Stones and kissing her wife on the front cover of Time magazine.

KH: They capture our typical Antigone Rising sound, which is a country rock sound. The thinking behind releasing two separate EPs came from my view that the music industry is in such a state of chaos. The industry just seems to be about releasing this constant stream of content and so much music nowadays seems to get lost because no one listens to it. Most fans are only interested in downloading a single or one track off an album.

We thought it would make sense to put out the CD in two parts over the course of the year so there’s a big splash in the early part of the year and another big splash later on. We’ve made videos for all the songs on the EPs in order to try to make an event out of each and every song. There are artistic reasons for our decision, but it also makes sense from a marketing standpoint because by December people might have forgotten about an album that came out eight months ago, so short are attention spans nowadays. So come October or November when part 2 comes out, it’ll be a brand new CD and will have a new relevance.

This time we wanted to take a different approach to putting out our music. At first we considered digitally releasing one song at a time every month and then at the end of the year putting out a CD containing all those songs. But because it’s been a couple of years since we made a CD, we decided that we needed a physical product to sell while on tour.

Q: Where will you be touring this year? Any plans to come to London?

KH: As of now it’s all in the States, but we’re definitely looking to go to Europe and Canada as well. We don’t have anything on the books for Europe yet, but we’d love to get over there.

Q: What was it like supporting the Rolling Stones? Did you get to meet them?

KH: It was awesome! The Stones are like this huge roaming city unto themselves, setting up new restaurants and shops and facilities in a new city every night. The production that goes into a Rolling Stones tour is mind-boggling.

The crowd’s reaction to us was also great. I remember some years ago seeing U2 in a big arena and the Kings of Leon – before they had broken through – were the support act. The audience wasn’t really paying attention to them. The lights were on and the stadium was relatively empty, well there were maybe 5 or 6000 people as opposed to the 20-30,000 that would later come see U2.

By contrast, when we opened for the Stones in Chicago, there were 30,000 people, the lights were on and it was a full-on show. I couldn’t believe it. I had told myself that in arena shows nobody comes to see the opener, but on this occasion the place was packed!

The Stones themselves are totally gracious and they made a point of meeting us. We spent a lot of time with both Ron Wood and Charlie Watts over the course of the tour. Keith Richards would hang out on the side of the stage while we played. Eventually we did get to meet Mick too, although he was a little less accessible. Given the show he puts on each night he has to lay low and rest. We had a really great time on that tour with the Stones.

Q: Do you prefer playing smaller or bigger venues?

KH: We’ve gotten to a point in our career where we know how to tailor our sound to whatever room we’re playing. I just love the response from an audience, wherever it is. Even if you’re playing a 200-seat venue – if it’s packed then the energy you can get off that is so intense. I can’t really compare or contrast one venue over the other, I just love playing live. When we have played in front of 20,000 people it feels intimate if people are into it, if they’re cheering and enjoying the music.

Q: Last year a photo of you kissing your wife appeared on the front cover of Time magazine. What sort of effect were you hoping that would have on public attitudes to same-sex marriage?

KH: The whole point of that was to come out, be vocal and hopefully change people’s hearts and minds. It was less controversial than we or Time expected. Time was gearing up for it to be this big scandal and had prepped us for attacks by the conservative media. But instead the most right-wing commentators – people like Bill O’Reilly and Geraldo Rivera – said that they didn’t know what the big deal was. So it was sort of a non-event. I guess that, on social issues, these conservatives are not so repressed any more.

Q: Do you think that represents progress? That people across the political spectrum are becoming more open to same-sex marriage?

KH: Absolutely. The landscape has changed pretty fast. In 2009 my wife Sarah and I wrote a book about our experience of being LGBT mothers and before we did press for that we were advised by GLAAD (Gay & Lesbian Alliance Against Defamation), an organisation that Sarah is now the chair of. They prepped us for a hostile reaction and they were right – a lot of the interviewers were opposed to same-sex marriage. They asked us questions like ‘What about the poor kids?’ and ‘Don’t they need a father?’ Then two years later my wife and I are kissing each other on the front of Time magazine and I was pleasantly surprised that the reaction was very different.

Q: 5% of the royalties from both volumes of Whiskey and Wine will be donated to GLAAD. Could you explain what GLAAD do?

KH: They primarily focus on the media’s representation of the LGBT community. In any instance where they feel like there’s been a misrepresentation they try and correct the error or educate people about the truth. I truly believe that the equality movement in the United States has largely been won because of the work GLAAD do and the way they have helped to change public perceptions of LGBTs.

A lot of Americans don’t realise that same-sex marriage is illegal in many parts of their own country or that LGBTs do not have equal rights to straight people in, for example, the workplace. They are not equal when it comes to health benefits or the right to adopt children. But people are at least now seeing positive images on TV of LGBTs on shows like Will and Grace and Modern Family. I feel like we are winning the war by using the media to change people’s minds. I’m not saying it’s won yet – there’s still a lot more to do.

Q: And the Time cover was a big step forward.

Q: Country music has traditionally been associated with conservative values. Is homophobia a problem in country music today and have you or your band ever been the victim of prejudice?

KH: Antigone Rising started out as a rock band and we’ve shifted slowly towards a Southern Rock sound and now, I guess, we have a country sound. I wouldn’t say that we’re part of the Nashville scene and in a sense, I think we’re flying in the face of Nashville, and I kinda like that. No one in the business has ever said anything negative to me, but I do sometimes wonder what the real reasons are for not getting booked in certain venues or not being asked out on certain tours. We certainly aren’t being embraced by country artists or country labels, but there are plenty of LGBT country fans who appreciate artists like us who they can identify with.

Q: Do you make a conscious effort to put political messages into your music?

KH: Not really, it’s never intentional. There may be moments in a song where we might allude to our lives – being out or not being out or making certain political choices, for example. For the most part, just by showing up and playing and being out and being who we are – this is a statement on behalf of women because we’re an all-female band and it’s a statement on behalf of LGBTs because we are all gay and out.

It can be a little divisive if you try to pound a message into people. I just like to play music. A producer once said to me, ‘Like the music, like the man.’ He told me that he never used to care for Bruce Springsteen’s music and then he worked with Springsteen, got to know him and found him to be so nice and generous that he learned to love his music. So I think by showing up and allowing people to get to know us, we win them over to who we are and what we believe. I think that’s more effective than making some bold statement. I’m not opposed to people doing that, of course, but it’s just not how we roll.

Tom Sykes is a widely-published writer, editor and journalist whose work has appeared in The Telegraph, The Times and numerous print and digital media around the world. He is a regular contributor to the London Magazine and the New African. He is the co-editor of a collection of political journalism and five anthologies of travel stories. The first, No Such Thing as a Free Ride? (Cassell Illustrated), was serialised in The Times and named The Observer’s Travel Book of the Month. Having lived and worked in India, Malaysia and the Philippines, he is currently Lecturer in Creative and Media Writing at the University of Portsmouth. His website is www.tomgsykes.co.uk