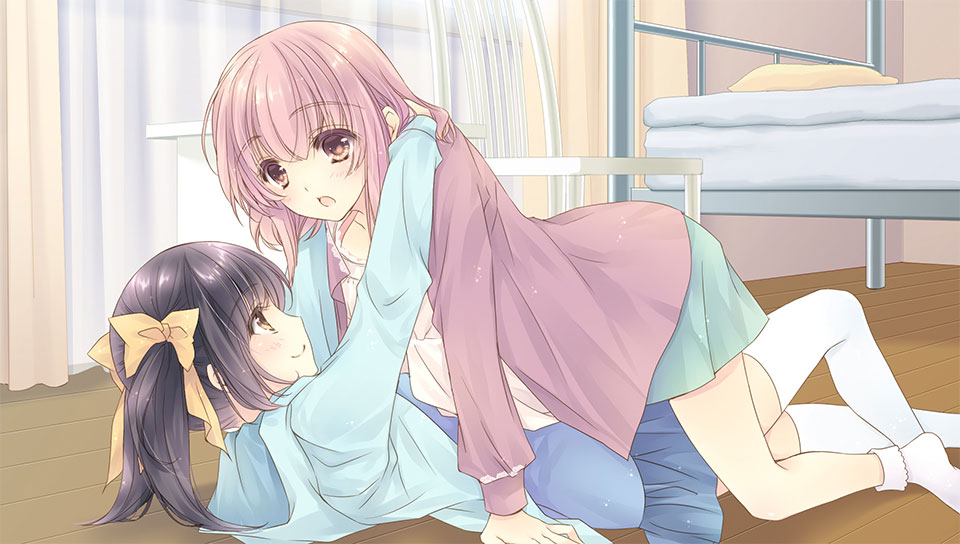 When it comes to LGBT representation, it’s a well known fact that video games do it badly. Very few games feature LGBT characters as side characters, let alone as playable ones.

Notable game series include The Sims, Dragon Age and Mass Effect which have all allowed players to have same-sex romances since they were created. But these games take breaks – and they are just three video game franchises (all published by the same company, I might add) – and so there’s very little to choose from.

But there may be at least one game to tide you over if The Sims 4 and Dragon Age: Inquisition aren’t up your street – a game called White Robe Love Addiction. Straight out of Japan, White Robe Love Addiction is actually a visual novel (these are essentially interactive stories) and so it features very little gameplay, but if you’re looking for femslash romance in the video game space, it’s one of few examples.

Set to be released on (Sony’s handheld games console) PS Vita in April, the game focuses on a group of women who are looking to become nurses. In typical trophy fashion, the women are often clad in short skirts, garters and other clothing decisions clearly made for ‘maximum titillation’. (When I said it offered queer representation, I didn’t mean it offered the best representation, but alas.)

If you can overlook the God awful character design, there might be a story here for you to latch onto. The lead is named Asuka and we play as her during time at nursing school (around three years) during which we meet Itsuki, Sakuya, and Nao. Itsuki and Sakuya are the lead queer couple, even being described as “the most perfect couple in the whole school.”

Itsuki has green hair, is the school’s lothario and her skills include “sexual harassment” which is more than a little concerning. Sakuya meanwhile, is devoted to her studies despite the fact that she was pressured into enrolling in nursing school. As for Nao, very little is known about her but it’s been confirmed that her and Asuka become fast friends.

Unfortunately, as Japanese gaming press has been very reluctant to cover the queer angle of the game, we can’t confirm whether Asuka herself will get to to have a romance with a classmate or if players will only be able to witness the relationship between Itsuki and Sakuya. Furthermore, it seems unlikely that White Robe Love Addiction will receive translation into English so you may want to brush on your Japanese before importing it.

White Robe Love Addiction will be released on April 30th, 2015 for PS Vita.