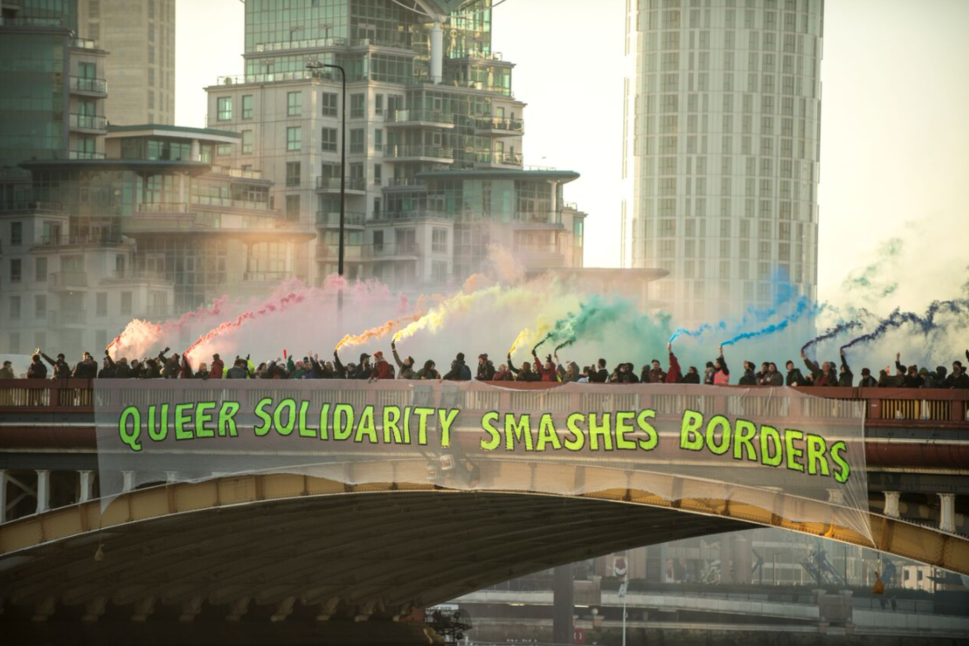 A London LGBT group has hung a banner reading “Queer Solidarity Smashes Borders” over Vauxhall Bridge on the day of Donald Trump’s inauguration. The protesters of the group released smoke in rainbow colours, and the demonstration attracted many.

The banner hanging was part of a bigger, worldwide movement that took place on the 20th of January 2017, the day when Donald Trump was sworn into office. The movement is called “Bridges Not Walls” and started from the UK as a collective demonstration of solidarity to minority groups, women and others threatened by Trump’s racist, sexist and homophobic agenda, as well as a protest against the rise of right wing politics in many countries.

There have been over 250 banner drops all over the world where citizens, campaigners and activist groups have gathered to hang a banner over a famous bridge, and then take a photo to upload on the program’s Dropbox and raise visibility and solidarity on those issues. There is a video on the official website that shares the slogan: “They say build walls but we say build bridges.” Participants have registered their event on the action map so people in their area can find and join them.

The initiative started by Hastings ice cream man and homeless shelter worker Will Stevens after the result of the US election, in order to phrase the anxiety of the people who have directly been threatened by Trump’s upcoming presidency.

Spokesperson of Bridges not Walls, Nona Hurkmans, said: “On Trump’s inauguration day we’re taking action to show our support for groups under attack – here in the UK, across Europe and in the USA – and to reject the rise of a dangerous and divisive far rights politics. We won’t let the politics of hate peddled by the likes of Donald Trump take hold. What happens next is up to us and by standing together we can show that the rhetoric of fear and hate have no place in our society.”

Chief Executive of Migrants Organise, Zrinka Bralo, said: “We stand in solidarity with colleagues and friends in the US. We have all read reports of an increase in hate attacks. The emergence of neo-Nazis and white supremacists is scary; the attempt to normalize what is going on is even scarier. We have the responsibility to fight against attempts to divide us. Our shared values of justice, respect for dignity, human rights and the truth must shine through these difficult times.”

The movement has spread as far as Ethiopia, Cambodia, Australia, the USA and many European cities. More than 150 of the banner drops have taken place in the UK, including London’s most iconic bridges. A 25m big banner reading “Bridges not Walls” was planned to be dropped from Tower Bridge in London. Other signs include “No silence on UK violence #BlackLivesMatter” at London Bridge, “What happens next is up to us” at Millenium Foot Bridge, a banner against islamophobia at Southwark Bridge, one for the rights of immigrants and refuges on Westminster bridge, and a Women’s rights banner on Waterloo bridge.

Among the LGBT activists at Vauxhall bridge was the comedian Joe Sutherland, who sent a message of solidarity to all LGBT people anxious about their futures worldwide. He said: “As a queer comedian it’s my job to find funny ways to deal with a bad situation. But what we’re facing now isn’t funny, it’s terrifying. The dirty tactics of mainstream media and politicians in UK, Europe and the USA are trying to divide us into smaller and smaller groups and make us fear each other. I’m here as part of my LGBTQ+ community to show that we stand with others who feel threatened: migrants, muslims, women, people of colour and disabled people. If we support each other then we don’t have to be afraid.”