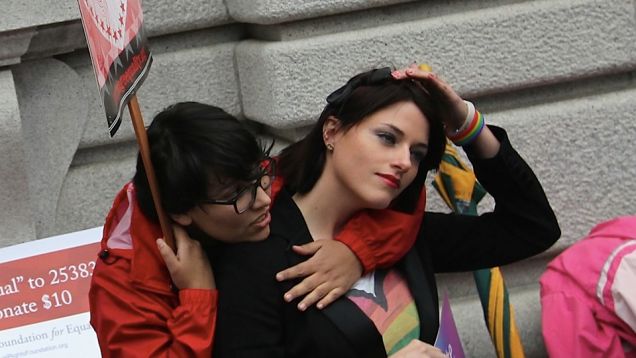 The world at large has come a long way over the last few years, especially as it pertains to the queer community. Many places now have full marriage equality, and many more have at least decriminalized the act of coming out. There’s still a long way to go, though, especially for certain countries. How are we doing, on average?

Australia is home to one of the most “gay friendly” cities in the entire world (it’s right up there with San Francisco!), but also some very conservative views that still seek to hide homosexuality, for alleged “moral” reasons. All in all, opinions are bound to vary from one person to the next, but most native Aussies are pretty supportive of gay rights.

A research study was actually done by the Pew Research Center a few years ago, which actually showed that a higher percentage of Spanish citizens feel that homosexuality should be accepted by society than those in the United States (at 60% acceptance), the United Kingdom (at 76%), and even in super-progressive Canada (at 80%). We think this means that Spain is probably the best country to be gay in – who’s moving with me?

I’m sure you’ve heard about the controversies in Russia lately – where it’s still legal to use violence against anyone with “non-traditional gender presentation”. The subject of the anti-LGBT atmosphere in Russia has made the news within the queer community repeatedly these days, and for good reason: Things need to change.

We already touched on the fact that Canada is one of the most gay-friendly countries in the world. Same-sex marriage has been legal throughout all of Canada since 2005, a full ten years ahead of when the United States legalized love. Truthfully, Canada has made probably the most significant progress of any country over the last fifty years; in the 1960s, Canada wasn’t really ahead of the rest of the world with gay rights, but look how great they’re doing now!

They’re not quite the beacon of equality just yet, but in March of last year, the ban on gay marriage was effectively lifted – or, at least, it won’t be enforced anymore. This is definitely huge news for the queer community in Puerto Rico, but every little success for any of us is a success for all of us.

Another super-gay-friendly corner of the world, the Netherlands actually prioritizes safety of the queer community – rather than silently allowing mistreatment and hate crimes. Not only that, but the government website even specifically mentions that they “champion improvements in the legal position and safety of [LGBT people] worldwide”. Yep, you read that right – they don’t just want the Dutch LGBT community protected – they want all of the LGBT community protected.

Even though the nation is largely conservative, Nepal decriminalized homosexuality in 2007.

Given the rest of North America’s near-constant improvements for the queer community, Mexico has unfortunately not kept up with expectations. Discrimination against “sexual minorities” is a real problem, especially as it pertains to education. We even hear of children of same-sex parents being denied access to education, as well as homosexuals and transgender individuals facing violence at educational institutions – an estimated 74% of gay men, 50% of lesbians, and 66% percent of transgender respondents (out of 1,032 total respondents) had personally experienced violence in a place of learning. There’s even a report of some gay tourists being asked to leave an establishment after kissing, and being greeted by policemen with machine guns. Talk about excessive use of force!

Kenya is definitely not on the list of good places to be gay. Anti-gay discrimination runs rampant in the country, and the government has “no clear commitment […] to deal with the issue of homophobic instances of violence”, according to Human Rights Watch. This is a scary thought, because you expect your government to protect you from unfair treatment… Right?

It’s probably not much of a surprise that Israel isn’t particularly gay-friendly. Not only are equal rights not even a topic of discussion for most people, but in the 2015 Pride parade in Israel, there were six members of the LGBT community stabbed, in what the Prime Minister Benjamin Netanyahu referred to as a “despicable hate crime”. Possibly the saddest part about this is that a 16-year-old ally was killed in this incident, too, simply for associating with the queer community.

While homosexuality isn’t a criminal offense in Italy, only about 31% of Italians actually support equal rights. We feel positive that this situation can improve – after all, decriminalizing love is the first step on the way to legalizing it completely – but there’s still a long way to go.

Ireland is known for having some of the most liberal atmospheres for the queer community – in fact, they were the first country to pass same-sex marriage legalization by popular vote, rather than someone in charge implementing it on their own. It might not seem like a big difference – after all, the end result is the same – but it definitely speaks for a progressive society if the people made it happen.

According to the previously-mentioned Pew Research Center study, Germany is in second place in terms of gay acceptance, with 87% of respondents fully supporting equal rights. Additionally, the Berlin Pride Celebration is one of the largest pride parades in all of Europe. PS, gay marriage is completely legal there, too.

Even though same-sex marriage was legalized in 2013, that didn’t exactly help the LGBT community in the country. According to The Guardian, anti-LGBT violence in France actually went up after the bill was passed. (This is exactly why popular vote is so important – legalization without acceptance isn’t much of a win. Just look at the current state of the US, with presidential candidates threatening to overturn the vote, and actually gaining strong support!)

Since Brazil made same-sex marriage legal in 2013, they have quickly climbed to one of the most “gay friendly” countries in the world. But as Ellen Page recently showed us on Gaycation, just because that’s the “average” response doesn’t mean it’s the only response – and there are still people who admit to killing homosexuals just for being gay. (By the way, if you don’t watch Gaycation yet, you definitely should – and not just because I have a crush on Ellen Page.)

What about your country?

We’re interested in hearing what LGBT+ life is like in the countries our readers live in, too. Drop us a comment and let us know what it’s like in your corner of the world!

1 thought on “What Being LGBT+ Is Like Around the World”